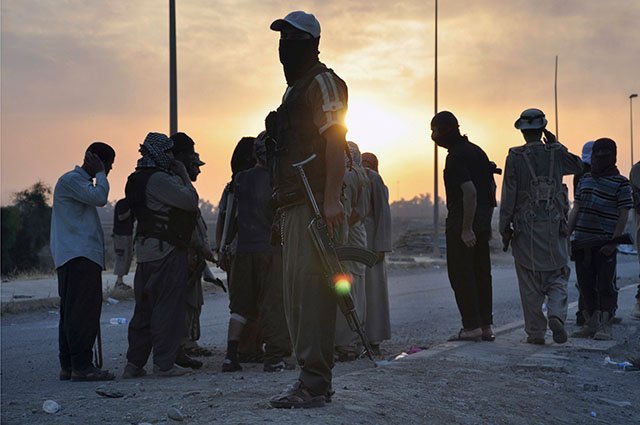 Islamic State fighters stand guard at a checkpoint in the northern Iraqi city of Mosul in this June 11 file photo. The United Nations reported Oct. 2 that the Islamic State has committed a "staggering array" of human rights abuses and "acts of violence of an increasingly sectarian nature" in Iraq, causing many in Mosul to flee.

AL-UM-KUNDUN, Jordan (CNS) — Iraqi refugees who fled Islamic State violence and theft of their property in Mosul said it will be difficult to ever return home, despite concerns by the church that more Christians are fleeing their ancient homeland in the Middle East.

"I thought I was living in a kind of dystopian end-of-times film," said Jassam, 33, speaking about Mosul when the Islamic State militants invaded.

"I had lived in Mosul my whole life, and never anywhere else had I experienced the love and kindness I knew there. But what a violent upheaval of fortune befell us after June 10, when the extremists took over," he told Jordanian Catholic and Muslim officials during a day of solidarity with the Iraqi refugees held outside of the capital, Amman, Oct. 1.

The refugees asked that they be identified without their full names.

"It was truly shocking. The militants told us, Christians, to pay the Islamic tax or convert to Islam," the businessman said, his eyes welling with tears.

Jassam worked with his father, a respected entrepreneur in the city for the past 30 years, and they owned three shops.

After the Islamic State takeover, someone approached Jassam on the street, telling him that he should "pay" to keep his shop. On another occasion, a young man visited Jassam’s home and declared himself to be the new "governor" of the area.

The man "announced that the region was part of the Islamic State, including my house and property," Jassam told Catholic News Service.

"I said this is enough. This is my family’s property and we worked for it," he said. "But in the end, we had to flee for our lives."

Mosul was the center of northern Iraq’s Christian heartland, boasting of a Christian community for more than 1,600 years. Islamic State militants burned the city’s ancient Catholic Church to the ground in July.

Another man, Abu Suleiman, recounted that at first the Islamic State extremists told the Christians they would respect churches and Christian homes, "but that was lies."

"We were lucky to leave when we did. We discovered that those who hadn’t left Mosul were told to convert to Islam or be beheaded," the elderly man said.

Abu Suleiman said that the moment Islamic State fighters took over Mosul, his Muslim neighbors sided with the extremists and betrayed him, "telling them what property belonged to Christians."

"With the Islamic State in Mosul, there is no way we’d ever return there," he said. "I lost my shop. They put a red letter ‘N’ in Arabic, symbolizing Nasrani or Christian, on my house declaring it their property. I later discovered that a militant from Afghanistan was living in my home."

"I lost everything I ever had in life. How do I live my life after that?" he asked.

"Our Christian community forms the basis of the cultural and religious heritage of Iraq. Can someone from a faraway place take over my home? These are very difficult things," Abu Suleiman said, shaking his head.

The Iraqi Christians said "crimes against humanity" have been committed against them and Iraq’s other minorities, such as the Yezidis, also targeted by Islamic State militants. They urged the international community to do more to help them and bring restitution to their situation.

"When I fled Mosul, to the northern city of Irbil, my family was forced to live in the streets. For what reason was this, simply because we are Christians?" Abu Suleiman asked.

The United Nations reported Oct. 2 that the Islamic State has committed a "staggering array" of human rights abuses and "acts of violence of an increasingly sectarian nature" in Iraq.

These attacks — seen in just over two months — are "systemic" and "widespread," according to the U.N. As of early September, more than 9,300 civilians have been killed and more than 17,300 have been wounded, the report said.

The Iraqi Christians expressed their thanks to Jordan’s King Abdullah II for allowing 1,000 Christians who fled Mosul to find safety for at least one year in Jordan.

Father Rifat Bader, who directs the Catholic Center for Studies and Media, one of the sponsors of the event, told CNS that another 850 Iraqi Christians from Mosul were expected to be housed in Jordan in early October.

Caritas, the Catholic Church’s humanitarian aid agency, has helped these and hundreds of thousands of other Iraqi and Syrian refugees sheltering in Jordan.

Marwan Al Husayni of Jordan’s Royal Institute for Interfaith Studies said his group was also working alongside Catholic institutions to try to help the Iraqi Christians "live in peace in the current stage until their future is determined."

He called the Islamic State events "acts of terror."

"We are trying to show them what is the real Islam, the Jordanian example of coexistence, interfaith harmony and humanity," the Muslim leader said.

"You have a wounded dignity," Father Bader said of the Iraqi Christians from Mosul. "But we are working together to heal you."

"You were forced out of your country, to hold your cross and to stand on Golgotha with Christ," he said.

"It’s time to console them and be close to them, but to assure them that the coming days will be better."

"They have to be patient to stay here and not to think about another emigration outside the Middle East," Father Bader said.

He expressed the concerns held by a number of Christian leaders, including Pope Francis, that more Christians from Iraq and other parts of their ancient Holy Land will flee to the West as Islamists threaten their ranks.

"The Christian identity and presence is important all the aspects of life of the Middle East. Christians are needed here to engage with the other citizens to build our new society based on equality, citizenship and democratic principles," Father Bader added.