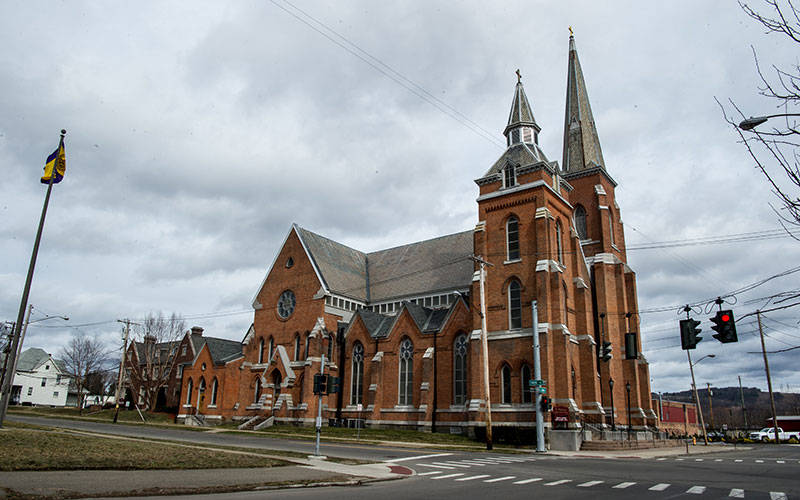 With churches bearing the title of St. Patrick in eight of 12 counties, the patron saint of Ireland — whose feast day is March 17 — is well represented throughout the Rochester Diocese.

All of the present diocesan churches named St. Patrick were founded in the 19th century, owing largely to the high volume of Irish Catholic immigrants who settled in the region.

Interestingly, none of those churches are located in the diocese’s most populous county, Monroe, although the county was home to the former St. Patrick Cathedral in downtown Rochester. Founded in 1823 as Rochester’s first Catholic parish, St. Patrick was dedicated as a cathedral in 1870, two years after the Diocese of Rochester was established. The cathedral was demolished in 1937 and St. Patrick ceased as a parish in 1979.

In all, 11 churches named St. Patrick are currently active in the diocese:

• In Seneca Falls, organized Catholic activity began in the early 1830s before the name of St. Patrick was adopted in 1864. The current church building was dedicated in 1931, and St. Patrick became part of Seneca County’s St. Francis and St. Clare Parish in 2012.

• In western Livingston County, the roots of St. Patrick in Mount Morris go back to the late 1830s. The first church was built in 1850, and St. Patrick’s current church was dedicated in 1873. In 2006, St. Patrick became a part of the five-church St. Luke the Evangelist Parish.

• Catholic worship in Aurora dates back to the early 1840s. It wasn’t until 1874 that St. Patrick Parish was established with dedication of the original church building that remains in use today. In 2002, St. Patrick became a part of Cayuga County’s Good Shepherd Catholic Community.

• In 1842, St. Patrick in Owego was founded as the first parish in Tioga County and one of the oldest in the diocese. The first St. Patrick Church opened in 1850, and the current church was dedicated in 1890. St. Patrick became part of Blessed Trinity/St. Patrick parishes in 2003.

• St. Patrick Parish in Victor was formed as a mission in 1850 and officially became a parish in 1856. The current St. Patrick Church was dedicated in 1925. More recently, the steadily growing Ontario County parish dedicated a new parish center in 1996.

• In 1856, St. Patrick Parish in Macedon was founded as a mission, with its first church opening the following year. A new church was dedicated in 1958. The church in western Wayne County became a part of St. Katharine Drexel Parish in 2010.

• St. Patrick Parish in Prattsburgh began forming in the 1850s, with the present church going up in 1868; it has been renovated and enlarged several times since then. The northern Steuben County church became a part of Our Lady of the Lakes Parish in 1998.

• St. Patrick in Elmira was established in 1869, with the current church opening in 1874. In 2018, St. Patrick became part of the Parish of the Most Holy Name of Jesus that comprises all five Catholic churches in the Chemung County city.

• In 1872, St. Patrick Parish in Moravia was formed with Masses being celebrated in private homes. The present church went up in 1884. In 2002, it was one of two St. Patrick churches in Cayuga County (along with Aurora) to become part of Good Shepherd Catholic Community.

• St. Patrick Parish in Cato was formed in 1874, with its current church going up a year later on a plot of land purchased by area Catholics in the late 1860s. The northern Cayuga County church became part of Our Lady of the Snow Parish in 2005.

• In eastern Wayne County, Savannah’s St. Patrick Parish opened its first church in 1875, two years before the Village of Savannah was incorporated. A new church opened in 1965, and in 2012 St. Patrick became part of St. Joseph the Worker Parish.

Along with these churches, several additional ties to St. Patrick exist in the Rochester Diocese as well:

• Patrick Place, a comfort-care facility in Scottsville, opened in 2018. It is named in honor of the former St. Patrick Church in nearby Mumford, which was established in the early 1850s and closed in 1992.

• The Ancient Order of Hibernians, an organization for which St. Patrick is the patron saint, has several men’s and women’s divisions in the diocese.

• There are a number of Catholic cemeteries across the diocese that are named after St. Patrick. They are located in Aurora, Geneva, Macedon, McLean (Tompkins County), Moravia, Mount Morris, Owego, Prattsburgh and Victor.