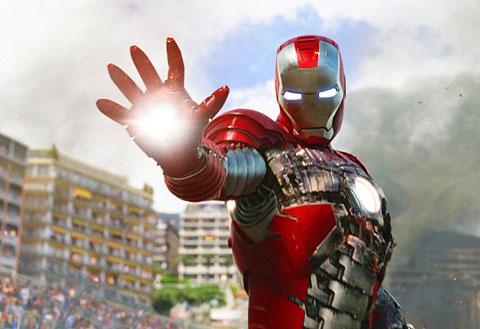 NEW YORK (CNS) — Some viewers will be perfectly happy to accept the stylish sci-fi follow-up "Iron Man 2" (Paramount/Marvel) at face value, looking for nothing more than diversion from this almost entirely gore-free, though steadily clash-laden, action story. Yet below the glossy surface of director Jon Favreau’s second adaptation of a popular comic book series that originated in 1963, others may perceive a cautionary tale about the two-edged potential of modern munitions.

The sequel’s opening scenes find freewheeling weapons manufacturer Tony Stark (Robert Downey Jr.) the lone arbiter of global peace, thanks to the high-tech suit of armor that transforms him at will into the titular, seemingly invincible, hero.

As Stark’s subpoenaed appearance before a Senate committee — chaired by the comically irksome Senator Stern (Garry Shandling) — makes abundantly clear, however, this is not a state of affairs that sits well with the political establishment. Summoned to testify at the same hearing, even Stark’s friend and former military liaison, Lt. Col. "Rhodey" Rhodes (Don Cheadle replacing Terrence Howard) is forced to admit his doubts about his buddy’s monopoly on world power.

In a parallel to the nuclear arms race of the 1950s and 1960s, a rival to Stark — who is nothing if not characteristically American in both his virtues and his vices — emerges in the person of gifted but warped Russian scientist Ivan Vanko (Mickey Rourke).

Bearing a personal grudge against Stark — their fathers were partners until an acrimonious split that Vanko blames for his dad’s subsequent ruin — and armed with an Iron Man-like outfit of his own invention that emits whiplashing bands of destructive energy, Vanko eventually allies himself with another of Stark’s opponents, smarmy competing industrialist Justin Hammer (Sam Rockwell).

With further plot developments producing yet another would-be Iron Man, as well as a legion of remote-controlled Iron Man-style drones, and with Stark wavering between responsibility and moral breakdown, Justin Theroux’s script explores the impact of weapons-based clout as concentrated in the hands of the good, the bad and the uncertain.

The film contains considerable, though virtually bloodless, action violence; some sexual humor and references; at least one instance of profanity; a bleeped use of the F-word; a couple of crude expressions; and occasional crass language. The Catholic News Service classification is A-III — adults. The Motion Picture Association of America rating is PG-13 — parents strongly cautioned. Some material may be inappropriate for children under 13.