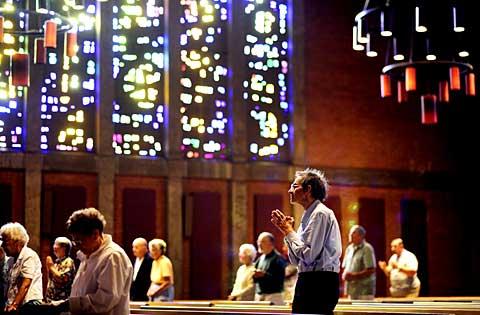 Parishioners participate in a weekday Mass at Irondequoit's St. Thomas the Apostle Parish in August 2009.

Starting July 1, five Irondequoit parishes will begin developing a plan to transition into a single parish with three worship sites, said Basilian Father Norman Tanck, who will lead the pastoral team for the new parish.

The transition is taking place due to Bishop Matthew H. Clark’s acceptance of the Irondequoit Pastoral Planning Group’s recommendation to consolidate Christ the King, St. Cecilia, St. Margaret Mary, St. Thomas the Apostle and St. Salome churches into one parish that encompasses the boundaries of the five current parishes. The planning group’s recommendation also included closing St. Thomas the Apostle and St. Salome, and using the other three parishes as worship sites. The bishop’s decision to accept the plan was announced in a letter read during Masses at the five parishes May 29-30.

The bishop said in his letter that he made his decision after consulting with the diocesan Presbyteral Council and the planning group’s pastors (Father Tanck; Father Tim Horan, pastor of St. Margaret Mary; and Father William Leone, pastor of St. Cecilia), and "after much prayer and deliberation."

The recommendation did not spell out details of the transition, Father Tanck noted, but he expects it will take about a year to transition the five parishes into one.

"The precise timetable (for implementing the plan) will require additional consultation," Bishop Clark wrote, adding that details would be communicated to parishioners as the plan unfolds.

Father Tanck said part of the transition plan will include setting closing dates for St. Salome and St. Thomas the Apostles, as well as working with parishioners to develop a new Mass schedule and determine staffing needs. Parishioners also will be involved in recommending a new name for the parish, he said, and will submit the recommendation to Bishop Clark for approval.

In his letter, Bishop Clark acknowledged that some people would respond to the change with disappointment or anger, while others would view it "as a journey of hope taken together to build a stronger, more vibrant Catholic community."

"I pray that those who disagree with my decision will understand that it was not made lightly or without firm and compelling reasons," he wrote.

Betsy Stehler, chairperson of the Irondequoit Pastoral Planning Group, said reaction to the decision has varied by parish.

The announcement received a mixed reaction at St. Thomas the Apostle, Stehler said, with many folks being very angry, while a few were hopeful that the decision might be a step toward healing division among parishioners. She also noted that a group of St. Thomas the Apostle parishioners is attempting to appeal the decision and has hired a canon lawyer to guide them in the process.

Many parishioners from Christ the King, St. Cecilia and St. Margaret Mary have expressed relief that the plan was approved and that their pastors have agreed to stay on, Stehler said, while she was told that the mood among St. Salome parishioners is one of somber disappointment.

Father Tanck noted that all the parishes in Irondequoit will experience significant loss as all five, in effect, are closed and a new parish is formed. Parishioners of Christ the King, St. Margaret Mary and St. Cecilia may not yet understand the extent of the loss they will feel as well, he said.

"I think they know what’s proposed, but the reality maybe hasn’t touched them yet," he said.

Stehler said the planning group acknowledges that with the closings they will lose some parishioners, but she said the hope is that those who leave will not abandon their faith and will be able to find a spiritual home at another Catholic church.

Stehler said the planning group will be working with all five parishes to tap people who are grieving the loss of their parishes and who can play a key role in cooperation and in being sensitive to every parishioner’s needs.

"We have talked with parishes and leaders in parishes that have clustered and some have closed, and we are encouraged that the pain can be overcome when you create something stronger, as long as you recognize the grieving process that some people will go through," Stehler said.

Father Tanck said evangelization will be a key component of the parish’s future.

"Evangelization isn’t recruitment," Father Tanck said. "It’s spreading the good news of Jesus Christ. It’s not getting people in your pews, which is also important. The church’s mission is to evangelize and spread the good news."

He said if Catholics in Irondequoit are able to successfully unite in harmony, they could set a good example for other segments of the Irondequoit community that have recently experienced significant division.

"If we can be a model to the town of how people can come together, I think we could do a lot of good," Father Tanck said.