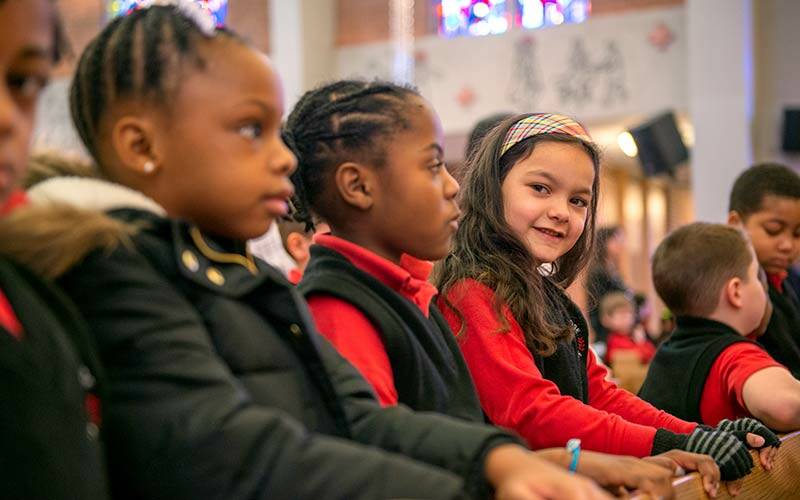 And lately, there’s been plenty of positive buzz going around.

It stems from the fact that the prekindergarten through grade 5 school — located at 31 Empire Blvd. on the Rochester-Irondequoit border — is marking its 100th year of existence. Special activities are celebrating a school that, in recent decades, has evolved from a chiefly parishioner-based student body to one of the few diocesan Catholic schools serving a large urban population.

Yet its basic priorities have remained unchanged, said Margaret Alfieri, who attended St. Ambrose in the late 1950s and early 1960s.

“I think there are so many similarities rather than differences,” said Alfieri, who has served since 2019 as the school’s academic intervention services math teacher. She cited “the tremendous amount of love and support that carries over to today. This is a very loving community, and the children know, hopefully, that they’re loved and cherished.”

The institution was founded in 1922 as St. Ambrose School, one year after St. Ambrose Parish was begun. Sisters of St. Joseph served as teachers and administrators during the school’s early history.

A low point occurred on April 29, 1962, when a fire destroyed a large portion of the school — which, thankfully, was not in session at the time. In the fire’s aftermath, students were bused to other area Catholic schools while theirs was rebuilt.

“It was hard on everybody,” recalled Alfieri, who was a fourth-grader at the time. The school reopened for classes on Sept. 4, 1963.

Two-thirds of school’s students live in City of Rochester

These days, the school has a diverse makeup. Christine Deutsch, principal since 2019, said that approximately two-thirds of St. Ambrose Academy’s current 127-student population are city residents — about the same ratio that identifies as Black or Hispanic. She added that more than 60 percent of the students’ families fall below the poverty line. These numbers reflect what Deutsch calls “the religious, ethnic and economic diversity that we are serving.”

“We make that mission pretty well-known in the parish, and we get tremendous support,” Deutsch said, noting that parish contributions enable many students to receive scholarships and other financial aid.

“The parish has been incredible,” agreed Tracey Routly, kindergarten teacher, who has taught at St. Ambrose Academy for 14 years.

Deutsch added that students receive free breakfast and lunch each day through the state child nutrition program, as well as weekly nonperishable food for their families via Foodlink’s Backpack Program that is supported by the Knights of Columbus at Peace of Christ Parish.

A constant for St. Ambrose Academy over the past 100 years has been its faith-based emphasis — one that Reilly Shanahan, a fifth-grader, credits as the key influence in her being received into the Catholic Church this past year.

“Learning religion and how they taught it, it was so easy to learn about. It seemed really interesting,” said Reilly, adding that her mother, Corinne, is currently receiving instruction to become Catholic as well.

“The activities, the teachers, the friends you can make — I can’t name anything I don’t like about the school,” said fifth-grader Kory Dwyer, whose father, Ryan, attended St. Ambrose as well.

The school kicked off its 100th-year celebrations with a dance-a-thon in September 2022 and will end the special year in June with a color run, during which participants are doused with colored power as they run.

Additionally, all the goodness of St. Ambrose and its history will be noted at a centennial gala April 29. Those who wish to attend may call 585-288-0580 for details.

“It’s nice to be a part of it,” Deutsch said of the centennial year. “This school community has been very resilient with the challenges it’s faced and as the demographics have shifted.”

Tags: Catholic Schools, Monroe County East
Copyright © 2023 Rochester Catholic Press Association, Inc. All rights reserved. Linking is encouraged, but republishing or redistributing, including by framing or similar means, without the publisher's prior written permission is prohibited.