Is 'Avatar: The Way of Water' worth the 13 year wait? - Catholic Courier 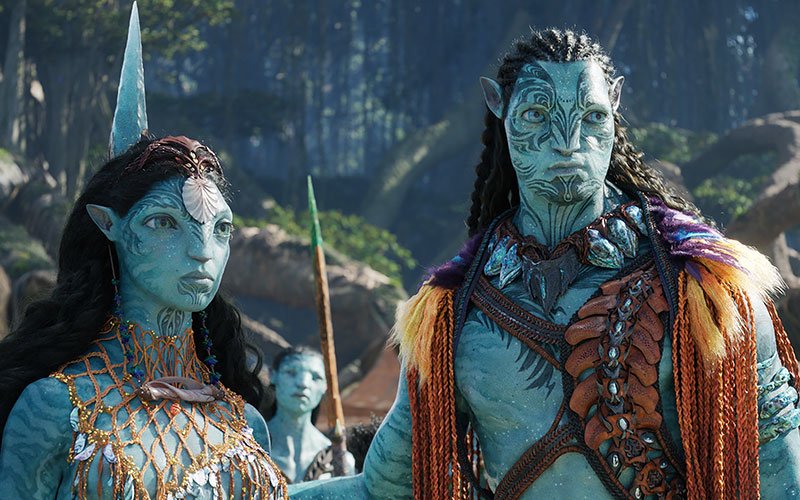 NEW YORK – Given that its predecessor remains the highest-grossing feature of all time, it may seem surprising that it has taken 13 years to release the sequel “Avatar: The Way of Water” (20th Century). Is this second sci-fi epic worth the wait? The answer will largely depend on what priorities movie fans bring with them to the theater as well as what concerns the film’s content may inspire in them.

In crafting his follow-up, director James Cameron, the auteur of the original, shares writing credit with Rick Jaffa and Amanda Silver. Their script returns viewers to the fictional moon Pandora and continues the story of the kick-off’s two principal characters, the avatar of Earth-born ex-Marine Jake Sully (Sam Worthington) and his Pandoran warrior wife, Neytiri (Zoe Saldaña).

Having chosen, for love of Neytiri, to continue life as a hybrid of human consciousness and a body in the likeness of the Na’vi – the 10-foot-tall, blue-skinned natives of Pandora – Jake has become the patriarch of a thriving family. Besides sons Neteyam (Jamie Flatters) and Lo’ak (Britain Dalton), the clan includes adopted daughter Kiri (Sigourney Weaver) and, informally, human hanger-on Spider (Jack Champion).

When earthly intruders, an earlier wave of whom were defeated and sent packing at the end of “Avatar,” return to Pandora in a renewed attempt to exploit its natural resources, Jake becomes the leader of the indigenous resistance. His high-profile role makes him a target, once again, for ruthless Col. Miles Quaritch (Stephen Lang) with whom he clashed in the first outing.

Torn between his urge to continue fighting and his fears for those in his care, Jake makes the decision to go into voluntary exile. After an arduous journey, the Sullys find shelter in a distant set of islands occupied by a tribe, known as the Metkayina, whose lifestyle is centered on the ocean. The locals are led by matriarch and shaman Ronal (Kate Winslet) and her husband Tonowari (Cliff Curtis).

As Kiri explores her mystical powers and hapless Lo’ak struggles to overcome his status as a perpetual disappointment to his parents, the technically innovative visual flair that helped propel “Avatar” to lasting preeminence at the box office is present in abundance across a three-hour-plus running time. Indeed, the luxuriant aquatics on display are such as might have left the late Jacques Cousteau eating his heart out.

Meanwhile, Cameron and his screenplay collaborators establish themes connecting the proceedings to environmental issues, corporate greed, the fate of Native Americans and the Vietnam War. Their points, however, are conveyed in an excessively earnest tone and via some clunky dialogue.

More significant are the problematic religious ingredients included in their narrative. Villainous Quaritch, for one thing, has been scientifically resurrected from the dead. Additionally, the Na’vi engage in a form of pantheistic goddess worship directed at a deity called Eywa. Given that such a cult is obviously at odds with Christian faith, “Way of Water” is not fit fare for the impressionable.

As for those old and well-catechized enough to dismiss Eywa as eyewash, they’ll certainly be treated to a spectacle rarely rivalled. Yet, whether the mere act of lingering in the chambers of the sea, to paraphrase poet T.S. Eliot, will fully satisfy their cinematic aspirations – given that the depths of Pandora’s oceans are not matched by a profundity of either emotion or insight – will remain a matter of taste.

Look for: Clan solidarity and love for nature.

Look out for: Nonscriptural beliefs and practices, stylized but intense and momentarily disturbing combat, partial nudity, at least one use each of profanity and rough language, a few milder oaths, about a dozen crude terms, several crass expressions and an obscene gesture.