Is imitation the sincerest form of flattery? Not on prime-time TV - Catholic Courier 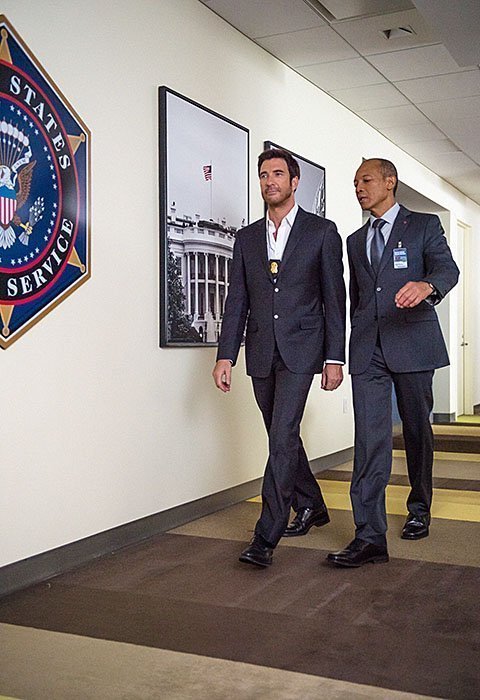 Dylan McDermott and Paul Calderon star in a scene from the CBS program "Hostages," one of a number of the new offerings on network television this fall.

NEW YORK (CNS) — Variations on familiar themes characterize a number of the new offerings on network television this fall. It would appear that if a series has succeeded, then it must be imitated — as if merely being derivative were itself a guarantee of success.

Hence we have “Hostages” (CBS), a political thriller in the spirit of Showtime’s “Homeland,” and “Betrayal” (ABC), a sex-fueled, sin-soaked soap opera that’s cousin to ABC’s “Revenge” and “Scandal.” Teenagers are filled with angst and insecurities, whether living in the 1500s (“Reign”) or in the not-too-distant future (“The Tomorrow People”).

Regrettably, the copycatting continues as well for so-called “family” comedies, in the spirit of “Modern Family” (ABC). Dysfunction is the norm; parents are at the mercy of their unruly children; and the humor contains a degree of innuendo and crude language that might still have provoked shock and outrage a decade ago. Now, it seems to be considered “normal” discourse.

In “Betrayal” (Sundays, 10-11 p.m. EDT on ABC), illicit lovers suffer the consequences of breaking the Sixth Commandment in this glossy drama set in Chicago. Sara (Hannah Ware), a married photographer, has an affair with Jack (Stuart Townsend), an equally hitched attorney. Trouble is, Sara’s husband, Drew (Chris Johnson), is also a lawyer, and soon he and Jack are on opposite sides of a sensational murder trial that exposes the seedy underbelly of the Windy City. Fortunately, the initial glamour of adultery in this portrayal gives way to guilt — and a recognition of the destructive power of sin. However, semi-explicit sex scenes and some grisly violence along the way further restrict the show’s appropriate audience.

The contemporary thriller “Hostages” (Mondays, 10-11 p.m. EDT on CBS), set in Washington, features a labyrinthine plot combining political conspiracy and family drama. Dr. Ellen Sanders (Toni Collette) is chosen to perform life-saving surgery on the president of the United States (James Naughton). The night before the operation, a team of kidnappers headed by rogue FBI agent Duncan Carlisle (Dylan McDermott) orders her to botch the surgery and assassinate the chief executive. To ensure compliance, Sanders’ family has been taken hostage. As the date of the (now-delayed) surgery approaches, mayhem ensues and escape plans are hatched. This is a tense, tightly written drama for adults, filled with unexpected twists — but also with violence and brutality.

With ABC’s “Back in the Game” (Wednesdays, 8:30-9 p.m. EDT), baseball is the sport of choice in this multigenerational comedy. Terry (Maggie Lawson) is a divorced mother and former star athlete who decides — in “Bad News Bears” fashion — to coach her son Danny (Griffin Gluck) and his hapless Little League team. Complicating matters is her once-estranged but now omnipresent father (James Caan), a drunken mess and shadow of his former all-star self. Needless to say, Terry and her dad clash on parenting, coaching, and even about what’s for breakfast. Despite the focus on young Danny, the salty language and innuendo makes this series adults-only viewing.

Here today are “The Tomorrow People” (Wednesdays, 9-10 p.m. EDT on the CW). Based on a British series of the same name, this drama follows the adventures of teenagers who, thanks to “genetic evolution,” have acquired three special powers: telepathy (reading minds), telekinesis (moving objects), and teleportation (vanishing into thin air). The latter comes in handy as they are on the run from Ultra, a mysterious organization out to destroy them. The story unfolds through the wide eyes of the newest recruit, Stephen (Robbie Amell). This futuristic soap opera contains the usual teen angst, geeky insecurities, and romantic hookups, while the action sequences are of the comic-book variety.

In “Sean Saves the World” (Thursdays, 9-9:30 p.m. EDT on NBC), Sean Hayes, formerly of “Will and Grace,” returns to television in this comedy about the eponymous divorced gay father who juggles a busy career with a manic home life, yet somehow manages to “save” the day by the end of each episode. Adding to the mayhem are his 14-year-old daughter, Ellie (Samantha Isler), his nagging mother, Lorna (Linda Lavin), and busty co-worker Liz (Megan Hilty). All conspire to find Dad a new partner, among other items on a long to-do list. Besides its obviously benign view of homosexual acts, the program’s humor is heavy on sexual sniggering and body-part references.

There’s a need to rain on the parade of “Reign” (Thursdays, 9-10 p.m. EDT on the CW). In the spirit of “The Tudors” and “The White Queen” comes this historical drama (very) loosely based on the life of Mary Stuart (Adelaide Kane), future Queen of Scots. Betrothed to Prince Francis (Toby Regbo), heir to the French throne, the fiery and headstrong Mary decamps to his castle with her sex-crazed ladies in waiting and navigates the treacherous waters of the royal court. Throw in the seer Nostradamus (Rossif Sutherland), who prophesizes doom for all involved, and you have a potent mix of intrigue and silliness. Needless to say, historical accuracy is cast to the winds, as this is basically “Gossip Girl” in Renaissance dress. Its treatment of beheadings, rape and masturbation, moreover, places this drama strictly off-limits to young viewers.