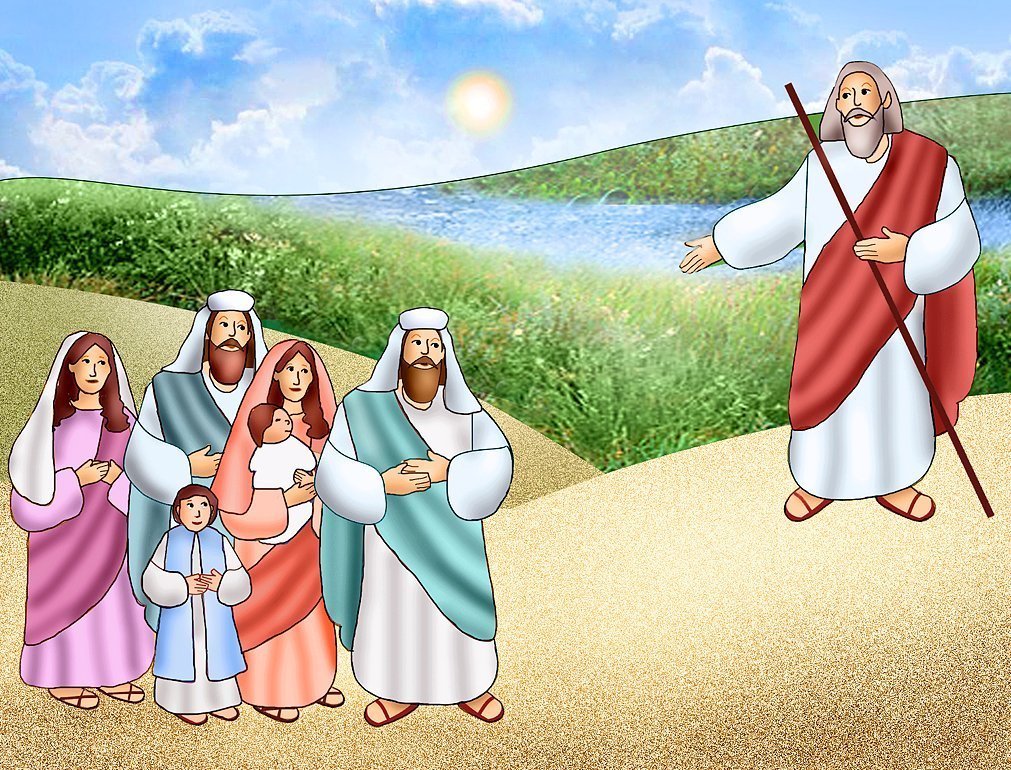 Moses spoke to the people of Israel the words God had given to him. “Be careful to observe all the commandments I enjoin on you today, that you may live and increase, and may enter in and possess the land which the Lord promised on oath to your fathers.”

Wanting to remind Israel of the hardships they had endured in Egypt and how God had freed them 40 years ago, Moses said, “He therefore let you be afflicted with hunger, and than fed you with manna, a food unknown to you or your fathers, in order to show you that not by bread alone does man live, but by every word that comes forth from the mouth of the Lord.”

Even though the Israelites had walked many miles across the desert, and had not yet found a place that would serve as their permanent home, Moses wanted them to know God loved them and was guiding their steps. “For the Lord, your God, is bringing you into a good country, a land of streams of water, with springs and fountains welling up in the hills and valleys, a land of wheat and barley, of vines and fig trees and pomeganates, of olive trees and of honey, a land where you can eat bread without a stint and where you will lack nothing, a land whose stones contain iron and in whose hills you can mine copper.”

This was good news to Israel, who had lived on meager rations and limited water. They would one day have fertile land to plant crops and feed their livestock and there would be valuable minerals. But Moses also had a word of caution for the wealth of this promised homeland.

Moses knew that God loved Israel, but he expected them to be faithful to him. He had been taking care of them since they left Egypt, and he would continue to do so as long as they loved him in return.

“Remember then,” Moses said, “it is the Lord, your God, who gives you the power to acquire wealth, by fulfilling, as he has now done, the covenant which he swore to your fathers.”

READ MORE ABOUT IT:
Deuteronomy 8

Q&A
1. What did the Lord want his people to do?
2. Where was the Lord leading Israel?

Moses was one of Israel’s most important leaders. During the life of Moses, the Israelites labored as slaves for the Pharaoh of Egypt. They often worked long days in the hot sun. They made bricks out of mud, then they used those bricks to make temples and other structures. Men who did not work or cooperate were whipped or punished in other ways. On a day that seemed like any other, God called Moses from within a burning bush. “I have witnessed the affliction of my people in Egypt and have heard their cry of complaint against their slave drivers, so I know well what they are suffering.” From that moment Moses began his leadership that brought the Israelites out of slavery toward the promised land that would belong to them.

Augustine (d. 605) was selected by Pope St. Gregory the Great in 596 to be the leader of a group of missionary monks. They were to go from Rome to Anglo-Saxon England. When they reached Provence, France, they were warned of the dangerous conditions in England, and the monks pleaded Augustine to return to Rome and ask the pope to cancel the mission. The pope told him he would be safe, so Augustine and his companions continued on to England.

Augustine was soon after appointed bishop of the English. The holy work was going well and Augustine sent a letter to the pope asking him to send more helpers. Another group of missionaries was dispatched to help in England and France. Augustine spent the remainder of his life establishing churches and spreading Catholicism across England. We honor him on May 27.