It is possible to maintain one's faith on campus - Catholic Courier 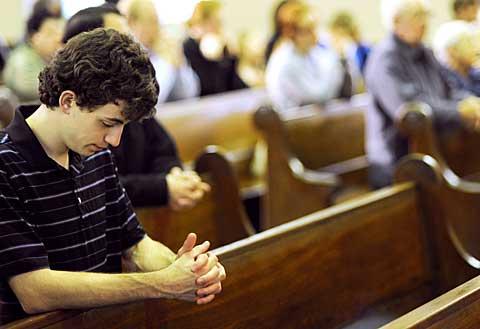 SUNY Geneseo student Anthony Leggiero prays during a May 9 Mass at St. Mary Church in Geneseo.

When Emily Salvas made the transition from high school to college in 2007, she made a commitment to sustain her Catholic faith. To achieve this goal, Salvas, now a senior at SUNY Brockport, forged friendships with students of similar religious backgrounds and became involved in campus-ministry programs.

Although she is steadfast in her commitment to maintain her faith, she said the reality of life on campus makes meeting her goal challenging at times.

"Just being on a college campus where some people aren’t trying to follow any kind of religion or strong values is sometimes difficult," she said. "I had to remind myself that I have my faith and they have theirs. Just because they act in a certain way doesn’t mean I have to."

The experiences of young adults such as Salvas show that although it can be tough to maintain one’s faith while transitioning from high school to college, it isn’t impossible, according to Shannon Loughlin, director of young adult and campus ministry for the Diocese of Rochester.

Loughlin noted that the shift from high school to college is filled with myriad changes — living away from home for the first time, experiencing newfound independence, sharing housing with one or more people who aren’t family members — and as such students’ concerns about their faith may rank low on their list of priorities.

"Everything — and I mean everything — is changing," observed Nora Bradbury-Haehl, youth minister at St. Paul Church in Webster and author of The Freshman Survival Guide: 25 Things You Need to Know About College. "A lot of people underestimate the impact that all those changes will have on their sense of self, on feeling lonely and out of place, and disconnected from God."

Whitney Williams remembers experiencing such feelings during her freshman year at the University of Rochester.

"College can be quite a struggle, especially freshman year," said Williams, now a sophomore at UR. "All the familiar disappeared for me (when I went to college)."

Young adults who strive to maintain their faith on campus not only feel that loss of familiarity, Loughlin said, but also may experience the need to explain or defend their faith in response to questions from roommates, acquaintances and even professors.

"You will probably hear, ‘Are you saved?’ ‘Are you Catholic?’ and ‘Are you kidding?’ at least once," she remarked.

Although students may encounter questions about their faith along with such hindrances to maintaining it as the temptation to engage in underage drinking, preparation can help to ensure that their faith is preserved, according to Bradbury-Haehl.

Important steps to that end are locating an on-campus or nearby church to attend and checking out campus-ministry programs, according to the Diocese of Rochester’s brochure "Being Catholic on Campus."

Another imperative step, according to Loughlin, is to mentally prepare for the newfound responsibility gained in college, which is a time when young adults will begin to make tangible decisions as individuals without input from their parents.

Salvas said that as her freshman year went along and she made her own decision about maintaining her faith at college, she realized that she could no longer rely on other people such as her parents to help make decisions for her.

"If I wanted to be excited and enthusiastic about my religion, then it all would come down to me," she said.

To help with that, Bustedhalo.com’s 2010 Freshman Survival Guide — also by Bradbury-Haehl — suggests that after moving onto campus, students should visit the campus’ church and sign up for campus-ministry programs, which should help young adults connect with peers possessing similar interests.

But, noted UR junior Frank Wolfs, college also is a time of exploration, questioning and learning. While it is ideal to have some Catholic companions, having friends of different religious backgrounds also is beneficial, he said, adding that he has few close Catholic friends.

"This has not been a real problem for me though," said Wolfs, who attends Mass every Sunday during the school year and often serves as a lector. "I have gotten into discussions with some of my friends about religion and learned more about their religions and traditions that I would never really have learned otherwise."

According to "Being Catholic on Campus," young adults should attend college with an open mind.

This nonjudgmental attitude — plus young adults’ commitments to regularly attend Mass, keep involved in campus-ministry programs and sustain friendships with fellow believers of their faith — will improve the chances of successfully continuing to practice their religion, according to the brochure.

Maintaining one’s faith also is necessary because it can ease a young adult’s transition into college, Loughlin said.

"Your faith gives you something to anchor yourself when every single part of your life is up in the air," she noted. "Delving into your spirituality can serve as your way of processing your experiences."

Young adults should therefore take advantage of their colleges as places to deepen their faith, according to Loughlin.

During her time at UR, junior Lauren Forbes said she realized an imperative truth: "We can’t do anything without God, and likewise, nothing is impossible with him. I think students need to remember that and turn to God and know that he is always with us."