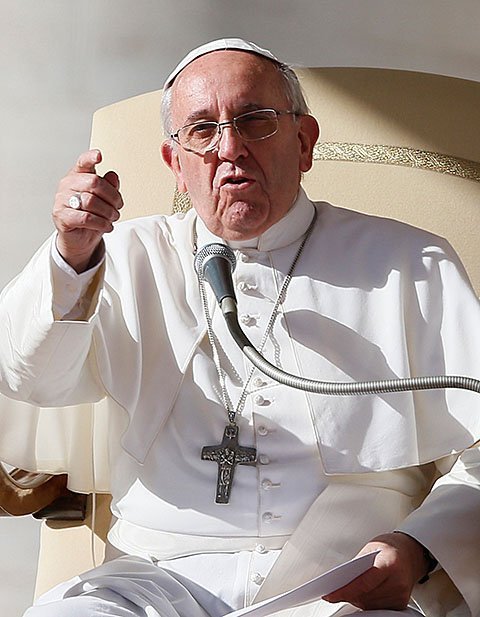 Pope Francis makes a point as he speaks during his general audience in St. Peter's Square at the Vatican Nov. 6.

VATICAN CITY (CNS) — Crime families in Italy are not happy with Pope Francis and would hurt him if they could, said an Italian prosecutor who has spent years investigating organized crime and has written a book about the apparent Catholic devotion of mafia bosses.

"I’m not sure organized crime is in a position to do something, but they certainly are thinking about it," said Nicola Gratteri, the assistant prosecutor of Italy’s Reggio Calabria region. "It could be dangerous."

In his book "Acqua Santissima" ("Most Holy Water"), Gratteri argues that while organized crime and the church should be completely at odds, that is not always true. He said he has never been to an arrested mafia boss’ hideout that didn’t have holy pictures on the wall, and many of his investigations have led to the discovery of financial ties between the bosses and Catholic parishes or organizations.

"But things are starting to change," he said in an interview Nov. 13 in the Italian newspaper Il Fatto Quotidiano.

"This pope is on the right path," he said. "He immediately sent important signals: He wears an iron (pectoral) cross and fights against luxury. He is consistent, credible and is aiming for a complete cleanup."

Mafia members involved in the world of finance are particularly concerned, Gratteri said.

"Those who feed off the power and the riches of the church are nervous and agitated," he said. "Pope Francis is dismantling the centers of economic power in the Vatican. If the bosses could bring him down, they wouldn’t hesitate."

Jesuit Father Federico Lombardi, Vatican spokesman, told reporters Nov. 14 that no one in the Vatican is alarmed, and the pope is serene in continuing his work. He also said it is natural for organized crime families to feel threatened by papal teaching, since the Christian message is about honesty and transparency.