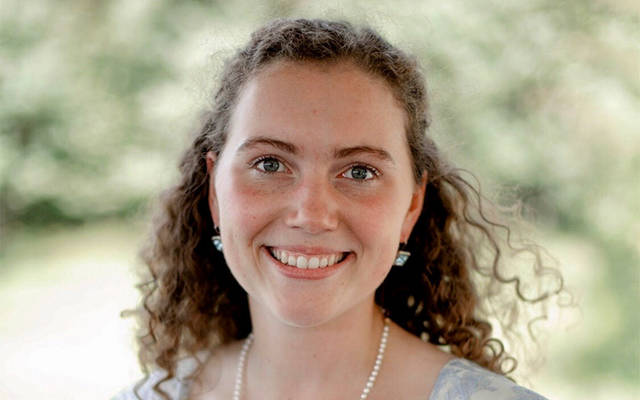 Mary Stephenson, a 2019 graduate of Ithaca College, is spending two years as a full-time Catholic missionary in Ohio.

As a senior at Ithaca College last year, Mary Stephenson was well on track to starting her professional career. She had several internships already under her belt and was about to obtain a bachelor’s degree in integrated marketing communications.

Then God revealed a different plan for her.

While attending a Fellowship of Catholic University Students conference, Stephenson got to chatting about missionary service with representatives of Damascus Catholic Mission Campus. That experience, she recalled, set off some serious soul-searching.

“I just knew I had to look more into it,” she said.

The prospect of diverting from her intended path “scared me at first,” the 22-year-old admitted. However, she said, “I knew, in my heart of hearts, that my Catholic faith is always my passion.”

Her fervent faith spurred Stephenson to make an atypical choice regarding her immediate future.

“I knew it was very countercultural,” she said. “The voice of the world is so strong sometimes. But God was saying, ‘Mary, I need you for more.’”

That’s how Stephenson ended up becoming a full-time missionary for Damascus this past May, right after graduation.

“It’s just been this beautiful journey,” she said of her experience thus far.

Stephenson resides and ministers to youths at the Damascus campus in Centerburg, Ohio, near Columbus. The organization’s stated mission is to be “awakening, empowering, and equipping a generation to live the adventure of the Catholic faith so that they may transform the world.”

Over the summer, Stephenson spent eight weeks staffing a camp attended by thousands of youths. It featured such fun, adventurous activities as high ropes and a climbing wall, combined with social events and a heavy emphasis on spirituality, including daily Mass and adoration. Currently, Stephenson takes part in leading a variety of youth retreats at Damascus. She and other missionaries also travel to Catholic schools and work with parish youth groups around Ohio.

Stephenson noted that programming at Damascus aims to reverse the troubling trend of young Catholics falling away from their faith in the years after receiving the sacrament of confirmation.

“(At Damascus) we see young people really come alive and be so on fire for our faith,” she said. “The hope is that when they go off to college, they’re so rooted in their foundation and relationship with Christ.”

The faith that Stephenson now instills in other young Catholics has long been a part of her own life. She is a 2015 graduate of Our Lady of Mercy School for Young Women in Rochester — a place that, she said, provided an anchor for her faith to become “a rocket that took off.”

That rocket continued to soar in college, as evidenced by Stephenson’s many activities within the Ithaca College Catholic Community: retreat leader; lector; extraordinary minister of holy Communion for a weekly Mass at a local nursing facility; involvement in social-justice issues; and attending World Youth Day in Poland in 2016. She also journeyed to South Carolina with Habitat for Humanity, helping to build two homes; and served as a resident assistant on the college’s Interfaith Floor, planning events for floor residents — primarily Catholic, Protestant and Jewish — to learn more about each other’s faith.

Looking ahead, following her two-year commitment with Damascus, Stephenson is considering work as a youth minister. She’s also looking to apply her marketing and public-relations expertise in helping Damascus Catholic Mission expand across the country.

“I would love to bring this back home to Rochester eventually,” said Stephenson, a native of St. Martin de Porres Parish/St. Mary of the Assumption Church in Scottsville near Rochester.

Stephenson, who raises funds for Damascus to help cover her room, board and modest salary, acknowledged that her income would likely be much higher had she immediately pursued work in her professional field. However, she said, she trusts completely in the Lord to guide her decision-making.

“I’m so excited about where God’s going to take me from here,” she said.

Her advice to other young people about making major life choices: Listen to your heart, and listen to God.

“Keep trusting and believing. Don’t be afraid to make a yes, a bold yes,” she said. “You will never regret making a bold yes.”

Stephenson, for one, harbors no regrets about making what she calls “the biggest yes to God in my life” by opting for missionary duty.

“It’s been the most life-giving, joy-filled thing I could ever do,” she stated.