Ithaca contingent stands for life during Lent and beyond - Catholic Courier 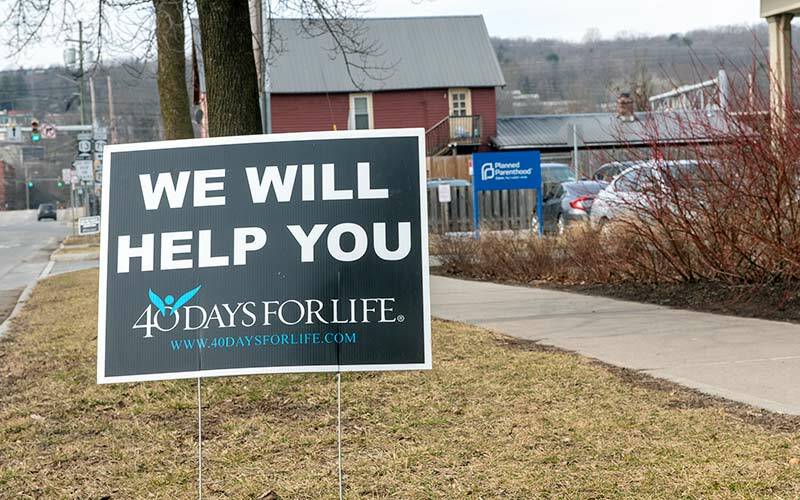 Would she abort or give birth to her unborn child?

She ruled out terminating her unexpected pregnancy and eventually gave birth to Roberson’s older brother.

“It was difficult circumstances,” said Roberson, a Moravia resident. “But (my brother) has been a blessing in my life.”

Roberson, 23, now implores other young women to seek their own blessings by resisting the option of abortion.

As noontime approached March 11, she and seven other adults kept vigil on sidewalks outside the Ithaca Planned Parenthood facility. Some held signs containing such message as “Jesus 4 Life” and “You Matter to Jesus.” Others simply prayed silently — a peaceful contrast to the many vehicles motoring by on busy West Seneca Street. Clients trickled in and out of the Planned Parenthood building, yet no words were exchanged between them and the demonstrators.

The latter group’s presence was in conjunction with the 40 Days for Life campaign that covers nearly all of Lent. It began Ash Wednesday, March 2, and will run through Palm Sunday, April 10, with participants gathering near Planned Parenthood every day from morning until evening.

Spring and fall campaigns are conducted annually; the last prior 40 Days for Life in Ithaca took place Sept. 22-Oct. 31, 2021. The initiative has taken place locally since 2009, two years after the international 40 Days for Life movement began. Demonstrators maintain a lesser — yet still steady — presence outside Ithaca Planned Parenthood the rest of the year as well.

Mary Anne Tissot, the founding and longtime local 40 Days for Life coordinator, remains active today. Standing with other pro-life advocates March 11, Tissot said she’s passionate about the 40 Days for Life cause because she feels that the destruction of human life is contrary to God’s will.

“I believe the Lord is telling us, ‘There’s a holocaust going on, what are you doing about it?,’” remarked Tissot, a parishioner of Good Shepherd Catholic Community in Cayuga County.

Cortland’s Becky Fluger, current coordinator for Ithaca 40 Days for Life, likened abortion to the Holocaust of World War II, saying there’s too much public silence about the killing of unborn babies in the same way that people knew the Nazi regime’s atrocities were occurring but did nothing to stop them. Fluger has been involved with 40 Days for Life since 2019.

According to the 40 Days for Life website (www.40daysforlife.com/en), efforts by groups and individuals over the years have proven effective. Information on the site states that more than 20,000 babies have been spared and more than 100 abortion clinics have closed as a result of efforts in the nearly 600 cities where 40 Days for Life campaigns take place.

However, demonstrators in Ithaca acknowledged that abortion-related advocacy is not for the thin-skinned. They said they receive both positive and negative verbal feedback, including some notably harsh comments.

Yet when angry outbursts occur, “We say, ‘God bless you,’” Roberson said.

They also said that every now and then, a Planned Parenthood client will stop and hear what the advocates have to say.

‘No other right matters’

Carolann Darling observed that not every woman entering Planned Parenthood is sure she actually wants an abortion, saying she once worked as an ultrasonographer at a medical facility where women were seeking abortions.

“I witnessed firsthand the fear and uncertainty these young women were experiencing,” she recalled. “And when it came time for the ultrasound, I could only hope that the fetus they saw would convince them to seek life for their child.”

Darling, who belong to Ithaca’s Immaculate Conception Parish, has been involved with 40 Days for Life since its early years, coordinating publicity. Her involvement with that and other pro-life advocacy comes down to one basic reason, she said.

“I truly believe that without the right to life, the right to be born, no other right matters — at all,” she stated.

Tags: Abortion, Tompkins County News
Copyright © 2022 Catholic Courier, Inc. All rights reserved. Linking is encouraged, but republishing or redistributing, including by framing or similar means, without the publisher's prior written permission is prohibited.