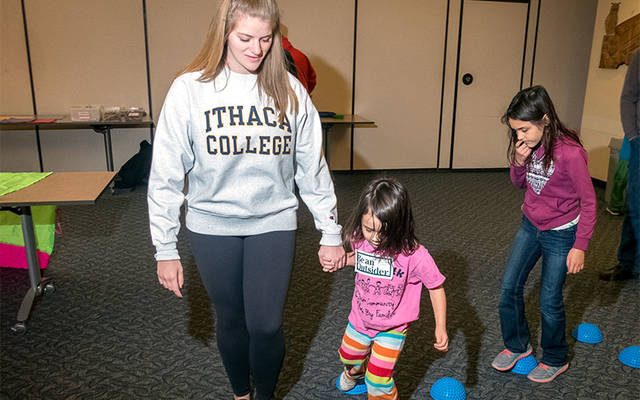 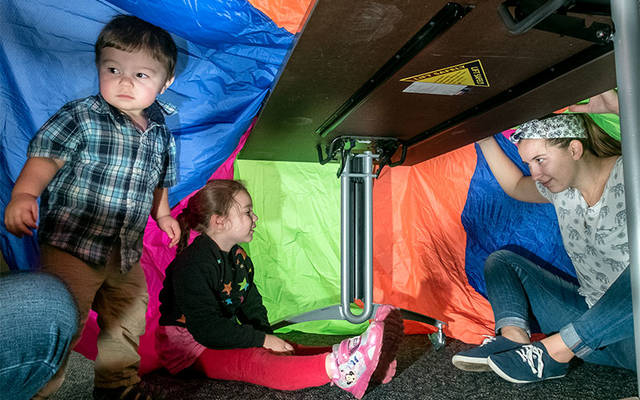 April is National Autism Awareness Month, and folks in the Catholic communities at Ithaca College and Cornell University have developed considerable awareness of the condition through their volunteerism.

Once per month during the school year, several students spend a weekend afternoon entertaining young Ithaca-area residents who are on the autism spectrum. The get-togethers occur in conjunction with Play ‘n Talk — a local initiative through which volunteers are paired with autistic children and their siblings, while parents and caretakers gather in another room for support-group meetings.

According to John Morton, a campus minister for both Ithaca and Cornell, his students have been involved in Play ‘n Talk for about a year, working with children ages 3-13 at the Tompkins County Public Library and the Sciencenter science museum. Activities have included playing musical chairs, drawing, coloring, computer usage, Lego-playing and book-reading.

Morton said he’s impressed by how smoothly his young-adult volunteers have adapted to their younger friends.

“The (college) students really look forward to it. They provide a lot of energy and are so easygoing,” he said, also noting that “that sense of community is really important for those (autistic) children to experience. All the feedback I’ve received is about what a positive experience it’s been.”

Rachel Turberg, an Ithaca College sophomore, and Stephen Solinas, a junior at Ithaca, said they look forward to their Play ‘n Talk sessions.

“I like working with special-needs kids and am comfortable around them,” added Solinas, 21.

Both Turberg and Solinas are quite familiar with autism. Each has an autistic cousin, and Turberg — whose home parish is St. Paul in Webster — volunteered in high school with autistic children, while Solinas knew autistic youths through Scouting. In addition, Turberg is majoring in physical therapy, and Solinas is an occupational-therapy major — two professions that often involve working with autistic people.

Of special note is a trip that Solinas is currently taking. The Oradell, N.J., native is in France as a chaperone with the American Special Children’s Pilgrimage Group, an initiative through which young people with physical and developmental disabilities — including autism — spend Easter Week in Lourdes, the renowned site of Marian apparitions to St. Bernadette. Solinas has volunteered several times on the annual pilgrimage.

“Personally, for me, as Catholics we’re called to help everybody. The population of people with disabilities is often overlooked, so I try to do my part,” Solinas told the Catholic Courier prior to his trip, adding that he also strives “to advocate and be a force for change” regarding autism awareness.

Autism is a wide range of conditions characterized by varying degrees of restricted and repetitive behavior as well as challenges with social skills, speech and nonverbal communication. Yet many on the spectrum also possess unique strengths; consider the central character in the movie Rain Man who could memorize an entire phone book. Autism can vary greatly in its characteristics and severity; hence the term “autistic spectrum.”

Both Solinas and Turberg wish for the general public to become better educated about autism and not avoid or marginalize autistic people. For instance, Turberg said she’s able to communicate fairly easily with her Play ‘n Talk buddies, saying that the experience is “very, very similar to interacting with children who are not on the spectrum. It’s just like working with any other children.”

“It’s not like we need to be afraid,” Solinas added.

There certainly appears to be no fear on the part of the Ithaca and Cornell Catholic students. In fact, Morton said they typically embrace not only their Play ‘n Talk volunteerism, but several other types of volunteerism as well.

“When I ask them what they’d like to do more of, one of the top answers is always service activities,” Morton said, observing that giving back to the community is a nice way of countering the many distractions of collegiate life: “It’s other-centered instead of self-centered.”

“It is a great way to break out of that little college bubble,” Turberg agreed.