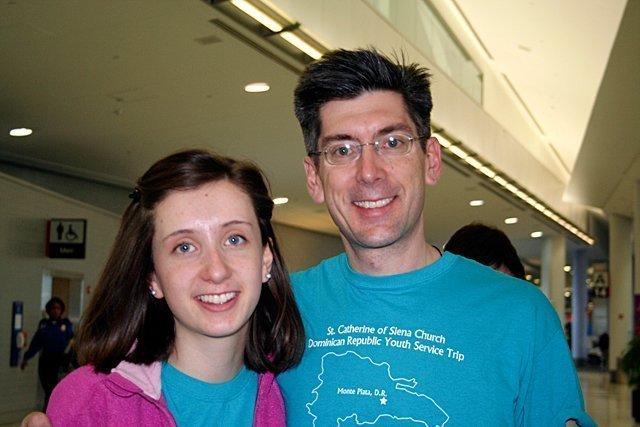 St. Catherine of Siena parishioner Steve Jesch and his daughter, Elizabeth, pose for a photo during a mission trip to the Dominican Republic in 2014. The two took part in a March 13 event for fathers and their children.

Thanks to a meaningful high school youth-group meeting March 13, Ithaca’s St. Catherine of Siena Parish shone the spotlight on dads long before Father’s Day rolled around.

Fathers and their teenaged children attended a session designed to strengthen relationships and produce better mutual understanding. Ashley Blank, St. Catherine’s youth faith-formation administrator, said teens often tell her how difficult good communication can be — especially with parents, who are saddled with various commitments while the teens themselves are becoming increasingly busy.

"We had done a couple of sessions with the moms of the teens and their children. And we thought it about time to do one for fathers as well," explained Blank, adding that a dad had first raised the idea to her.

A highlight of the March 13 gathering saw youths telling their fathers what was hard about being a teen, and what they wished their dads to know about them. The fathers, in turn, shared with their teens similar insights about fatherhood. When the meeting ended, some teens and their dads stuck around and simply spent time talking.

Blank described the sharing as "honest, inspiring, vulnerable and candid." She said it was obvious that the youths and their fathers wish to have good relationships marked by mutual love, respect and support — even when disagreements occur. For instance, she said, teen participants voiced a desire to become more independent even if it means learning from one’s mistakes, whereas fathers described the difficulty of not always knowing when to stand back and when to step in and protect their kids.

Ted Galanthay, who attended the meeting with his daughter Claire, 15, and son Teddy, 17, said he gained new insights on his own journey through fatherhood. For example, "As a father I need to initiate conversations, to ask how are things going. But I must also recognize that there are times when teenagers do not want to talk," he said.

Galanthay added that he is now more alert to respecting his children’s viewpoints: "Teenagers do not have the wisdom and experience of their parents. When we talk, I need to remind myself that their experiences are different from mine, and so their perspectives are different too."

Another vital area noted by Galanthay is spending quality individual time with his children — something he needed to work harder at creating after realizing that "it was easy for me to go the whole week without having even a five-minute, one-on-one conversation with my teenagers." But now, he said, "As a result of the meeting I have a ‘standing appointment’ to check in with my daughter after church on Sundays. It has led to us communicating more throughout the week too."

Steve Jesch, who took part in the March 13 event with his daughter, Elizabeth, 18, said he was reminded of the importance of trust when sharing feelings and communicating. An additional key point, he said, is that "listening to teens is much more important than talking. Teens need to feel that they are being heard, and dads need be attentive by listening. I feel like Elizabeth and I already communicate well. But after the meeting, I have found myself listening to her more attentively."

Elizabeth, meanwhile, said she and her father "sometimes struggle with misunderstandings" but that this issue has greatly improved since the meeting.

"I’m thankful my dad and I had the opportunity to talk about our relationship within a supportive, Christian environment," she said.