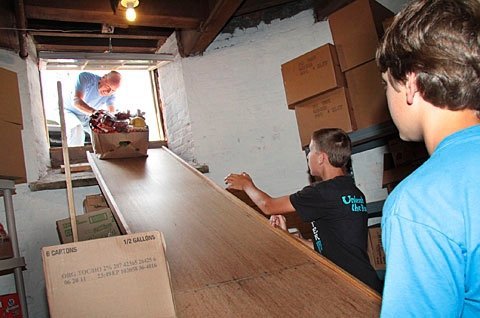 After arriving with a truckload of food from local businesses, Ithaca Food Pantry Volunteer Doug Gillolgy (left) sends a box full of produce through a basement window and down a ramp to 14-year-old Riley Rynone (center) and 12-year-old Dante Rynone July 12.

Which is a good thing, because the ratio of people served by the pantry has risen even more quickly.

It’s a tall task to continue meeting such escalating needs. But through the dedication of the staff, parish and community, the Ithaca facility is doing just that — and recently received a prestigious award for its good works.

Immaculate Conception was named Agency of the Year by Food Bank of the Southern Tier during the organization’s annual Agency Conference, held June 10 at the Owego Treadway Inn. The pantry was selected from among the food bank’s network of more than 160 hunger-relief outlets for its efforts in ending hunger, building community and developing volunteers.

"It blew us away," Lillian Tuskey, the food pantry’s director, said of the award. "It was awesome."

Awesome also could describe the ongoing commitment by the pantry since it was founded in 1998 under the direction of Audrey Kahin. The operation has only missed two Tuesdays — both holidays — in all that time. Otherwise, each Monday and Tuesday during the year is filled with volunteer preparation for food distribution at Immaculate Conception Church.

Working shifts of anywhere from two to six hours, workers perform such tasks as unloading the food bank’s delivery truck that comes to the church; driving to grocery stores to pick up donated items; preparing the food; setting up tables in the parish hall; and cleaning up afterward. Just before the Tuesday distribution begins, volunteers gather for prayer that is usually led by Father Leo Reinhardt, Immaculate Conception’s pastor. Tuskey said past workers who have either died or moved away are recalled during this time.

Clients begin coming in at approximately 1 p.m. According to Tuskey, the total averaged 30 to 40 during the pantry’s early years. By 2006 it was up to 75, and has since doubled with more than 90 percent of the recipients coming from Ithaca. Oftentimes, the food will be split among many members of a household. Tuskey cites the poor economy as the chief reason for this increased need, noting that despair is clear on the faces of many clients — but so is hope when they receive their food.

"The overall element you find is gratitude and thankfulness. Standing behind the table, you are thanked over and over and over again," she said, adding that the staff goes out of its way to be friendly — especially to first-time recipients.

Tuskey is one of several original volunteers still involved with the pantry; the staff has grown from 15 regular members to its present total of more than 40. Another longtime volunteer is Melissa Rynone — known as "The Bread Lady" — who has always made her 11-year commitment a package deal: She brought along her children from very early ages and now all three — they’re 18, 14 and 12 years old — are regular volunteers at the pantry during school vacations. Rynone said she began involving her family as "a way to incorporate volunteerism into my kids. They’ve come to expect it; they don’t give me grief or a hassle. They kind of look forward to it."

Other workers range from students at Immaculate Conception School to adults from other religious denominations.

"We span practically all groups in Ithaca," Tuskey said, adding that the only prerequisite is a willingness "to help and work hard."

In addition to its sterling fleet of workers, the pantry is bolstered by the generosity of Food Bank of the Southern Tier — "the main reason that we can continue to service so many people," Tuskey said. The food bank is a regional agency of Catholic Charities, serving hunger-relief ministries in Broome, Chemung, Schuyler, Steuben, Tioga and Tompkins counties.

Area grocery stores and a local farmers’ market are among many other outlets that donate numerous goods. Tuskey said financial reinforcement comes from Immaculate Conception Parish, which budgets funds for the pantry and takes up special collections during the year. Many individual donors contribute as well, including volunteers who "not only give their time but have dedicated their own treasure," she said.

This all-around support has helped the food pantry earn its distinction, in Rynone’s words, as "an amazing outlet for those who need it." Tuskey, meanwhile, said she’s grateful for her involvement, which began following the sudden death of her husband, Richard, a highly active volunteer in Immaculate Conception Parish.

"I knew I had needed to get out of the house and get busy," she remarked. "I was drawn to the volunteerism of this parish; it’s a very healthy place to go. This has been a wonderful part of my life."