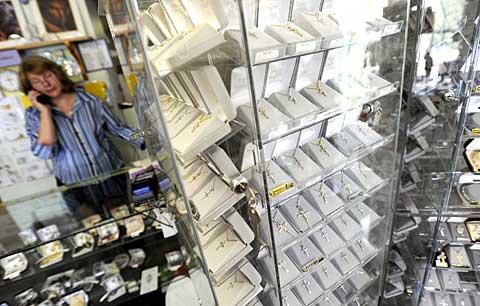 When your occupation is selling religious items, work becomes much more than a job. It’s also a ministry.

That’s the awareness Sharon Woloszyn has reached during her nearly four years as manager of Immaculate Conception Inspirational Gift Shop in Ithaca. Customers often allow her into very personal areas of their lives even if they’re total strangers, she said.

"We’ll send people over to the parish office who say, ‘You know, I want to become Catholic and I don’t know what to do,’ or, ‘I’ve had this tragedy in my life. What (items) do you have?’" Woloszyn remarked.

The gift shop, which has existed since 1980, is located at 107 W. Seneca St., filling up four rooms of a house once occupied by Immaculate Conception Parish priests. Woloszyn said the facility is the only Christian shop of its kind in the Ithaca area, drawing customers from as far away as Corning.

Hours are 10 a.m to 5 p.m. Monday through Friday; noon to 4:30 p.m. Saturday; and 9:30 a.m. to noon Sunday. Business has been brisk as of late; Woloszyn said numerous customers for Lent, Easter, Divine Mercy, confirmation and first Communion items have surfaced in the last few months. She said that in addition to numerous regulars, the shop enjoys a steady stream of visitors especially during the summer months. Another peak season is Christmas.

Among the wide range of items for sale are movies and music, Bibles, religious and inspirational books, candles, prayer cards, rosaries, angels, pictures, icons, statues, crosses and crucifixes, miraculous and saint medals, jewelry, greeting cards, church supplies, and garden stones and statues. The shop also is starting a lending library of religious-based movies for adults and children, and is seeking donations of such items. An emphasis on young people is further reflected in children’s publications featuring Bible stories, saint stories and angel stories, as well as faith-formation resource materials "to help parents teach their kids about the faith," Woloszyn said.

For items that are not on the shelves, Woloszyn special orders from her vendor contacts or acquires them online in a constant effort to go the extra mile.

"Some people might want the rosary on videotape instead of CD. That’s hard, but I can find it. I’m not making a heck of a lot of money, but I get them something they really want that means something to them," she said.

Woloszyn noted that the shop is ideal for people seeking traditional Catholic items connected to novenas, the rosary and saint feast days. In addition, although she labeled Ithaca "a huge bookstore community," Woloszyn said those shops are fairly devoid of the "super-religious books" found at Immaculate Conception.

"There is so much tradition in a religion that’s been around as long as the Catholic religion, and people appreciate the tradition," she said, adding that "we sell a ton of miraculous medals."

Although the gift shop is owned by Immaculate Conception Parish and located near the church, Woloszyn emphasized that it caters strongly to non-Catholic customers as well. In fact, she’s always trying to learn more about various faith traditions "so that we can provide what people are looking for." She added that regardless of the denomination, "I want to expose people to religion. Anyone who is searching for more spiritual and God-centered behavior is what I’m looking for."

Woloszyn further noted that this approach makes good business sense, saying the gift shop is significantly buoyed by bulk sales to both Catholic and non-Catholic churches.

"People still call us a Catholic shop, but you really limit yourself by doing that in a market where you need all the business you can get," she said, acknowledging that several spiritually oriented shops have closed in the Southern Tier in recent years.

"We do the rest of it with volunteers, and that’s priceless," she said, observing that staff members enjoy working in the facility’s decorative setting.

"We’re friendly, happy people here," she said. "This is a beautiful job. If you have to be somewhere for your day, what better place?"