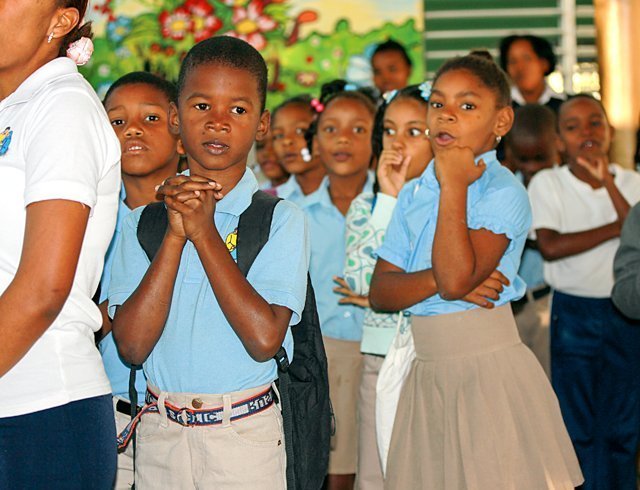 Students recite a prayer at the Portal De Belen school in Monte Plata, Dominican Republic, in this photo taken in February by St. Catherine of Siena parishioner Bridget Fetsko.

She is physically in Ithaca, but Bridget Fetsko’s heart remains some 1,700 miles away.

Bridget, 17, was deeply moved by her mission trip to the Dominican Republic this past February, as she was during her initial journey there in 2014. She rates her time in the Caribbean nation as "the best experience of my life."

"I am still thinking about when I can go back again," she said. "The people there have become family to me."

Bridget was among 12 youths and six adult chaperones from St. Catherine of Siena Parish who traveled to the city of Monte Plata Feb. 14-21. Then, a group of 14 adults visited there March 7-14. Both trips involved service work; visiting with families and schoolchildren; and seeing firsthand the benefits of a grassroots collaboration between St. Catherine and its sister parish of St. Anthony. 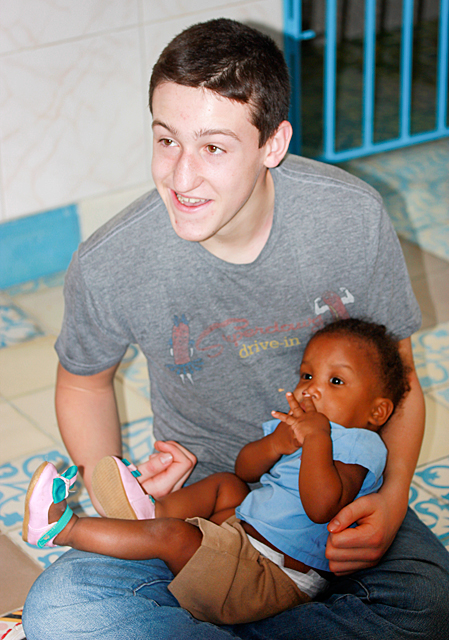 Sixteen-year-old Teddy Galanthay, a parishioner of Ithaca’s St. Catherine of Siena Church, holds a child during a February visit to the Portal De Belen daycare center and school in Monte Plata, Dominican Republic.

Working in conjunction with nuns and lay associates from the Missionaries of Jesus religious order, St. Catherine has donated several hundred thousand dollars over the past 15-plus years and made numerous mission trips to Monte Plata. This connection was originated and has been fostered over the years by Father Ron Gaesser, who served as St. Catherine of Siena’s pastor from 1987 until his 2003 retirement.

The chief beneficiary of St. Catherine’s aid is El Portal de Belen, a child-care facility and elementary school in Monte Plata that also provides badly needed medical assistance and nutritious meals for its young people. Juan Arroyo, a recent adult traveler, described the youths and their families as "the poorest of the poor in the city and the surrounding areas."

Mission efforts on this year’s trips involved doing labor and chores; sightseeing; and engaging in numerous spiritual and social activities with the folks of St. Anthony and El Portal de Belen. A spiritual highlight of the adult journey involved Arroyo, who became the first Ithaca-based Missionaries of Jesus lay associate. He committed himself to the service and goals of the order in a ceremony during which Father Gaesser — who now lives in the Dominican Republic most of the year — gave him a blessing.

Meanwhile, Bridget coordinated a picture-taking project involving more than 300 kids at El Portal de Belen. The pictures were printed and framed in Ithaca, then brought back to the youths and their families when the adult missionaries returned a month later.

"For many families, this will be the only picture they have of their child," noted Ann Marie Eckert, pastoral associate at St. Catherine, who was the only person to go on both the youth and adult trips.

Another memorable experience for Bridget was visiting a home where the husband is a paralytic, the woman is blind and she is raising her sister’s baby.

"I was so amazed by how well this woman is able to care for the baby and her husband while she is unable to see," said Bridget, whose mother, Maura, served as a chaperone on the youth trip.

Eckert said she observed similar resilience in the face of challenges, as well as a strong sense of community. She noted in particular a teacher at El Portal de Belen whose family has completed several home improvements after receiving funds from St. Catherine last year.

"There is still no indoor toilet, no shower, no running water, and nothing about the place makes me think it is a comfortable place to live. But they do live there, and they are excited and hopeful about the house they are working on," Eckert said.

Home projects are among the many ways that Dominican residents benefit from St. Catherine’s 200 Club, a series of parish raffles that generates approximately $1,000 per month for Monte Plata. Proceeds from the 200 Club funded the purchase of a large amount of computer equipment — with adult mission-trip participants doing setup and training — as well as the photograph project. In past years the 200 Club has helped in such areas as young women attending college; the purchasing of a school bus; building homes, latrines, water wells and additional classroom space; and providing income for El Portal de Belen teachers (Eckert noted that many lay associates are teachers and/or heavily involved in parish ministry).

St. Catherine of Siena also creates funding via donation bowls placed at church entrances and special events such as a chili dinner that raised more than $900. In addition, this year’s missionaries delivered parishioner-donated clothing, medicine, first aid supplies and diapers.

Arroyo, who has now made six mission trips to Monte Plata beginning in 2003, observed that when people personally witness the results of their charitable efforts "and how appreciated they are, they are motivated to do even more."

Then again, Bridget pointed out that one need not visit a foreign country to accomplish this.

"I encourage everyone to do something to help others in your community or far, far away. There are so many people in need and so many things we can do to help," she stated.