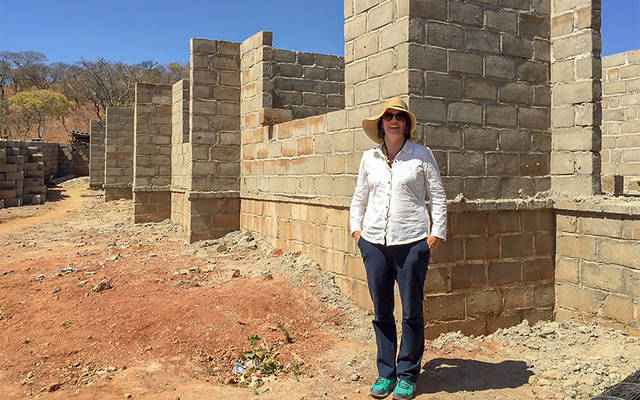 Melissa Bryant poses in front of a future community library in Zambia in 2016. (Photo courtesy of Melissa Bryant)

What began as a classroom project has, for Melissa Bryant, evolved into two mission trips some 7,500 miles from Tompkins County.

Bryant, a special-education teacher at Trumansburg Middle School, led assignments during the 2014-15 school year for two books addressing the global water crisis: The Big Thirst and A Long Walk to Water. Inspired by what they learned, class members staged a bake sale in June 2015 that, along with extra contributions, raised nearly $1,300 for Water for South Sudan, a Rochester-based organization.

Through that effort, Bryant connected with Dr. Muna Ndulo, a law professor at Cornell University who is involved in a project to build a high school in his native Zambia. Ndulo, who belongs to St. Catherine of Siena Parish in Ithaca, encouraged Bryant, a parishioner at Ithaca’s Immaculate Conception, to visit the African country to become better aware of its needs.

She made her first mission journey to Zambia in 2016, returning this past August for a two-week stay. On that trip Bryant and other volunteers delivered books and laptop computers to four area primary schools that will feed into the new high school, and also visited the school’s construction site.

“Before I got to do this (service), I would pray every day, offering myself up for God to use me where I’m needed,” said Bryant, 45. “So when this came along, I felt it was such an honor to be a part of this. I just feel so blessed and so lucky.”

The 2016 and 2018 trips were made in conjunction with the Zambia Community Education Initiative (ZCEI), an organization at Cornell for which Ndulo is a cofounder and Bryant serves as president. ZCEI focuses its efforts in southern Zambia where the rural Chisekesi community is badly in need of a high school to curb high dropout and illiteracy rates; the nearest high school is several miles away and students can only get there by walking. Also in the works for ZCEI are efforts to provide a community library in Chisekesi as well as improved access to water, with the Trumansburg Rotary as well as other Rotary clubs providing funds for the water initiative.

Bryant and Ndulo stressed the importance of ZCEI’s project, saying that education is the only hope for local folks to escape poverty.

“I think that from my life experience, education is the great, great liberator. I don’t think I’d be anything without education,” Ndulo stated, saying that knowledge will empower the Zambian people to better their own lives and also improve their communities.

Ndulo said the high-school construction effort in Chisekesi is coming along well: “We’ve made tremendous progress, we started from nothing.”

Yet Bryant noted that the project, which can potentially be completed within a year, has taken longer than expected because funds keep running out. She encourages donations to ZCEI by visiting https://www.zcei.org, saying that helping folks in other parts of the world is a responsibility that should be shared by everyone: “We’re all global citizens.”

Bryant said she was lifted up by the jubilation of students and faculty over the books and computers she helped bring in August.

“They’re just doing the best they can, with what little they have. They have hope,” Bryant said. She also noted the deep Catholic faith of many Zambians, saying she saw many construction workers as well as students wearing rosaries.

Bryant added that she’d like to return to Zambia: “I could really feel at home among the people.” In August she immersed herself in the Zambian culture by helping native women prepare meals for construction workers, cooking outdoors with limited food and supplies. She also carried heavy buckets of water on her head — a practice that she said is performed daily by Zambian girls who walk long distances to obtain clean water.

Among Bryant’s fun activities during her summer trip were visiting a crocodile farm and, while on a safari, petting lion cubs. In addition, she took a literal leap of faith by descending via bungee cord, screaming, into a gorge above the immense Victoria Falls bordering Zambia and Zimbabwe.

“I have a terrible fear of heights. I would never do it again; it’s crazy high,” Bryant said, explaining that she accepted the challenge nonetheless because “it was actually a prayer, my way of saying I will push myself through any boundaries for God. It was also my way of saying that I never want to hold myself back from reaching my potential.”