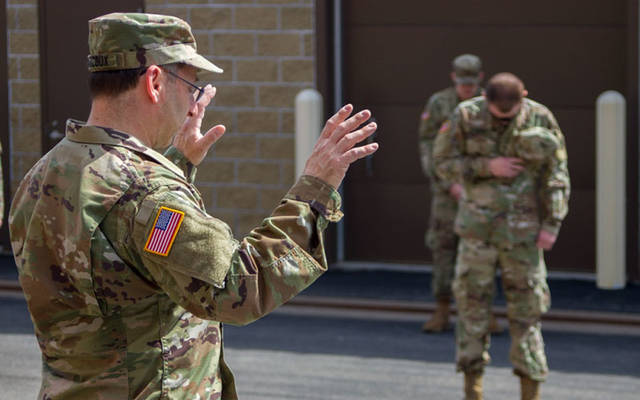 Soldiers assigned to the 152nd Brigade Engineer Battalion received a blessing from Father Joseph Marcoux April 6 before being deployed to New York City to assist with the COVID-19 crisis. (U.S. Army photo by Sgt. Alexander Rector)

Over a five-month stretch ending Aug. 21, Father Joseph Marcoux cared for the mental, emotional and spiritual health of fellow New York National Guard members — military personnel who dealt head-on with some of the grimmest aspects of the coronavirus pandemic.

Yet despite the often grueling demands of the chaplaincy work, Father Marcoux said he was very fulfilled by the experience, which included significantly more hands-on ministry than he typically has time for in his pastorate at Ithaca’s St. Catherine of Siena Parish.

The priest said he hadn’t expected to be pressed into duty so quickly after being sworn into the National Guard in September 2019 as a reserve chaplain in the 204th Engineer Battalion based in Binghamton. However, the coronavirus pandemic dictated otherwise.

Father Marcoux took basic training in January 2020, and on March 22 received a call for his first mission as COVID-19 was quickly spreading through the northeastern part of the United States. Although the assignment was voluntary, he opted to report for duty the very next day, since parish activity had largely ceased by that point due to statewide shelter-in-place orders.

“Everything was shut down anyway,” Father Marcoux remarked, adding that his service as a military chaplain has the blessing of Bishop Salvatore R. Matano.

The Ithaca pastor was dispatched to Hancock Field in Syracuse, where he assisted in the pre-briefing of service members about to be deployed across the state on such pandemic-related missions as assisting at COVID-19 and antibody testing sites and distributing food to residents who were sheltering in place.

But the greatest need — and most daunting work — for the soldiers and airmen was in New York City, which was then the national epicenter of coronavirus-related fatalities. With ambulance services, morgues, hospitals and funeral homes all overwhelmed, the National Guard was tasked with assisting the local medical examiner’s office in the dignified recovery of bodies from homes.

Father Marcoux helped in preparing military personnel of various religious denominations for what they were going to see. “These are 19- and 20-year-old kids; they were going down to assist in moving bodies. It was a pretty demanding thing,” he said.

In addition to being vividly exposed to death, service members were putting themselves at higher risk of infection by working in COVID-19 hot spots, noted Father Marcoux, who advised them to connect with chaplains in their deployment areas if they began experiencing significant anxiety.

Father Marcoux said that early on in his assignment, he ministered 13 hours per day, seven days per week. He eventually returned to Ithaca on Saturdays to celebrate livestreamed Masses, but largely left parish operations in the hands of his staff.

Later in his five-month hitch, Father Marcoux also reconnected with military members who had returned from missions to follow up on their emotional health.

“What I believe they really needed was a day to just chill out,” he said. He encouraged returning service members to spend time in nature fishing and playing lawn games, and made himself available to anybody — especially those who had been in New York City —who wished to privately discuss ongoing struggles. In aiding those who came forward, Father Marcoux said he leaned on his priestly experience of ministering to folks affected by trauma.

“The tendency is to want to fix the problem, which we really can’t do,” he said. “You learn with wisdom, age and experience that really, what you need to be is present and listen.”

Father Marcoux — who has led St. Catherine of Siena since 2010 — has spent more time at the parish since churches have reopened, but said he could be deployed again if a second wave of COVID-19 were to hit New York state. Meanwhile, he implores his faithful to do their part in warding off any such resurgence.

“Washing your hands, keeping six feet from people and wearing a mask — that’s what love of God and neighbor is these days,” he said.

Tags: COVID-19 Pandemic, Tompkins County News
Copyright © 2022 Catholic Courier, Inc. All rights reserved. Linking is encouraged, but republishing or redistributing, including by framing or similar means, without the publisher's prior written permission is prohibited.