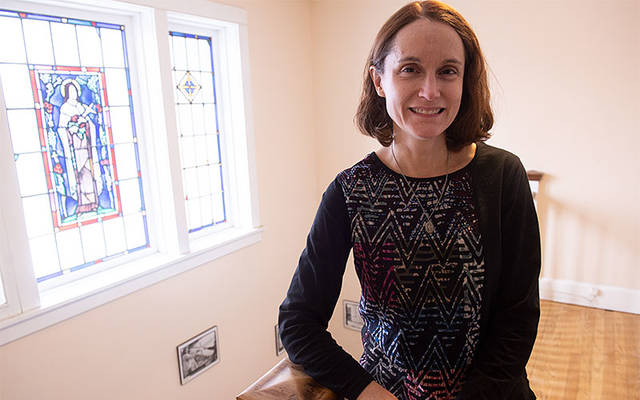 From Laurie Konwinski’s perspective, a willingness to discuss racism may require leaving one’s comfort zone to face some unsettling truths.

Yet all too often, she said, we fall short of acknowledging how deeply racism has been a part of our past — and present.

“We want it to be different. Most of us want it to be what that idealized picture is, liberty and justice for all, that this problem all ended with the Civil Rights Act,” Konwinski remarked. However, she added, “We have to be willing to admit that racism is an ongoing sin. We can’t tell ourselves there’s nothing more America can do.”

Engaging in dialogue and education about modern-day racism was the basis of a three-session series, “Talking Circles on Race and Racism,” conducted Jan. 23, Jan. 30 and Feb. 6 at Ithaca’s Immaculate Conception Church and attended by members of local Catholic and non-Catholic communities. The discussions were coordinated by Konwinski, who serves as deputy director for Catholic Charities of Tompkins/Tioga, and facilitated by representatives from the local Multi-Cultural Resource Center.

A leading topic of the series was the ongoing presence, particularly in the United States, of systemic racism — established policies and practices that benefit certain racial groups and hurt others in such areas as employment, income, housing, politics, education and the criminal-justice system. Using herself as an example, Konwinski pointed out that even if you believe racism to be evil and don’t consider yourself racist, it’s important to be aware of racial disparities and actively work against racism.

“We don’t want to think we have privilege, but as a white person, I have experienced certain privileges simply because of the color of my skin,” she said. “We all want to think, ‘That’s not me.’ We can throw up a lot of defenses. What we have to do is just say, ‘Let me call myself into some accountability.’”

The recent trio of talking circles marked an extension of a similar event last Oct. 24, also conducted at Immaculate Conception. Konwinski observed that dialogue during the talking circles was invigorating and productive, with participants feeling they could state their views without fear of confrontation.

“People were honest but also respectful,” she said.

Konwinski is a member of the diocesan Public Policy Committee, which in 2019 made racism one of its four focus issues; the other issues were farmworkers’ rights, late-term abortions and the opioid epidemic. Serving as the main impetus for the committee’s priority on racism is the U.S. Conference of Catholic Bishops’ pastoral letter, “Open Wide Our Hearts: The Enduring Call To Love,” which was released in November 2018. In that document, the bishops acknowledge painful truths regarding where we have fallen short as a society and as Catholic Christians.

“Many of our institutions still harbor, and too many of our laws still sanction, practices that deny justice and equal access to certain groups of people. God demands more from us,” the bishops’ letter states. It goes on to express “deep sorrow and regret” for acts of racism that have been committed by leaders and other members of the Catholic Church as well as “those instances when we have not done enough or stood by silently when grave acts of injustice were committed.”

Open Wide Our Hearts states that “not long ago” in many Catholic parishes, people of color were assigned segregated seating and not allowed to receive the Eucharist until white parishioners had done so. Going further back in time, the pastoral letter notes that in the mid-15th century, Pope Nicholas V permitted the kings of Spain and Portugal to buy and sell Africans, thus furthering the slave trade. The letter also points out that many American religious leaders, including Catholic bishops, not only failed to formally oppose slavery, but some even owned slaves.

In addition, the U.S. bishops touch upon the plight of Native Americans, stating that “colonial and later U.S. policies toward Native American communities were often violent, paternalistic, and were directed toward the theft of their land.” Konwinski pointed out that the Ithaca region itself serves as an example, noting that the Cayuga Nation was forced off its own land there hundreds of years ago.