It's back to school for Holy Family adults - Catholic Courier 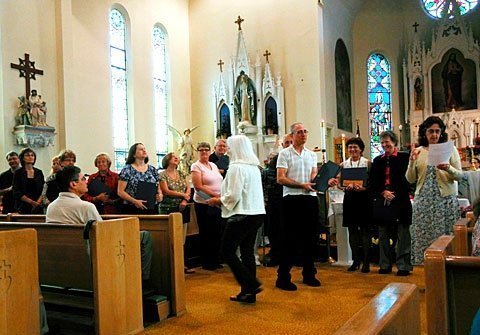 Graduates of the Catholic 101 program stand to receive certificates May 22 during Mass at Sacred Heart Church in Perkinsville.

As an adult, Joe Shafer has discovered himself longing for a deeper understanding of the Catholic education he received much earlier in life.

"I found what they really pound into you is the rubrics, and they don’t tell you how it really fits into your life and the church in general," he remarked.

Based on the tremendous response to a recent adult-education initiative at Holy Family Catholic Community, Shafer appears to have been far from alone in his wishes. "Catholic 101" involved some 50-plus people attending a program this past winter and spring that delved into numerous aspects of the Catholic faith. Participants were presented with diplomas during weekend Masses May 21-22.

The curriculum was made up of eight sessions in all, beginning Feb. 10 and ending May 13 with a new class held approximately every two weeks. Two dates were offered for each session to provide students with scheduling flexibility.

Participants reflected upon such faith-related topics as the seven principles of Catholic social thought; morality as it relates to the sacredness of human life, the Ten Commandments and sin; the meaning of each sacrament; and how to read a New Testament story. Shafer noted that students came from many walks of life, including a few who are not even Catholic.

Shafer said the mover and shaker for Catholic 101 was Deacon Driscoll, who serves as director of faith formation at Holy Family (St. Joseph in Wayland, St. Pius V in Cohocton, Sacred Heart in Perkinsville, all in Steuben County; and St. Mary in Dansville, Livingston County).

"I can’t tell you how exciting this is for our parish. Tom has discerned this need and we went with it. It was right on the mark, it was perfect," Shafer, a parish pastoral council member, said of Catholic 101. He added that the high turnout was reflective of that need: "When you finally realize the numbers, it’s like, ‘holy cow.’"

Deacon Driscoll currently runs a Bible study and has offered a vast array of other adult-education initiatives at Holy Family. And, there’s likely more on the way to complement the intent of Catholic 101, according to Shafer.

"Since this was so successful, and students have been asking for additional topics, we have already formulated a follow-up course we hope to offer this fall," he said. Its likely title will be "Prayer 101," since many Catholic 101 attendees have voiced interest in furthering their prayer life — "mainly how to pray individually, and not corporately like when they come together at Mass. There’s a significant number who have expressed this desire," Shafer said.

He added that a new round of Catholic 101 is being considered for next spring, with the likely title of "Catholic 102" — "almost the same sort of program, but with additional topics so that new people and graduates can benefit from it," he explained.