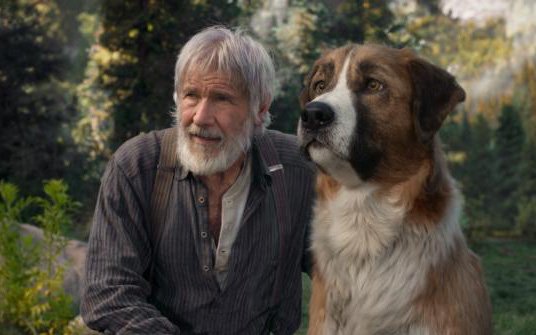 Harrison Ford and a dog named Buck appear in the movie "The Call of the Wild. (CNS photo by Fox)

The Call of the Wild

NEW YORK (CNS) — “Never was there such a dog,” says grizzled Yukon explorer John Thornton (Harrison Ford), admiring the antics of Buck, the canine star of “The Call of the Wild” (Twentieth Century).

Indeed not. For the Buck in this, the seventh film adaptation of Jack London’s 1903 novel, is a computer-generated marvel, a big sloppy St. Bernard-Scotch Collie mix as lifelike and convincing as the creatures in recent CGI films like “The Jungle Book” and “The Lion King.”

Therein lies both the charm, and the challenge, of the current version, snappily directed by Chris Sanders (“How to Train Your Dragon“). Fashioning Buck from thin air affords filmmakers the chance to add personality, even a gift for shtick, to their lead character, which lends a comedic tone to the story traditionalists will find discordant.

Furthermore, London’s beloved novel, which has never been out of print, has been effectively defanged by screenwriter Michael Green and Hollywood’s political correctness rinse cycle. Gone is the profound, searing tale of man’s inhumanity to man and beast, not to mention the extreme violence of life on the frontier, the threat from bloodthirsty indigenous people and the emergence of Buck’s killer instinct.

In its place is, admittedly, a highly entertaining comedy-drama with solid messages about love, friendship and respect. While London purists will be disappointed, dog lovers everywhere will be delighted (although the smallest ones could be frightened by occasional bouts of mayhem).

A few of London’s plot threads have survived. In the 1890s, Buck is a pet living a carefree existence at the California home of Judge Miller (Bradley Whitford). Up north in the Yukon, gold fever is raging, and large dogs are in demand to pull the sleds of prospectors and vendors.

In the middle of the night, Buck is kidnapped, sold and shipped to Alaska. En route, he is beaten into submission by a man wielding a wooden club, the first of many encounters with human cruelty.

Buck’s new owners are two mail carriers, the kindhearted Perrault (Omar Sy) and the skeptical Francoise (Cara Gee, a gender switch from the novel). He joins their dogsled team and quickly learns the ropes, setting up a rivalry and showdown with Spitz, the wicked lead dog.

When the mail route is canceled, Buck and his pack are sold to nefarious gold prospector Hal (Dan Stevens, straying very far from his saintly Matthew Crawley persona in “Downton Abbey“). Hal’s heartlessness catches the eye of passerby Thornton, who admires Buck’s tenacity and dignity. When Buck is savagely beaten, Thornton intervenes, rescues the canine and nurses him back to health.

“The Call of the Wild” strays far from the novel in expanding the role of Hal as a psychopath who pursues Thornton and Buck as they venture together deep into the wilderness. Thornton (who serves as narrator) also receives a backstory, explaining his quest for serenity and companionship.

All the while, Buck sheds his domesticated upbringing and hears that “call” to return to his primal roots. As soon as a comely white timber wolf emerges from the forest and catches Buck’s eye, you know the die is cast.

The film contains mild violence and characters in peril. The Catholic News Service classification is A-II — adults and adolescents. The Motion Picture Association rating is PG — parental guidance suggested. Some material may not be suitable for children.