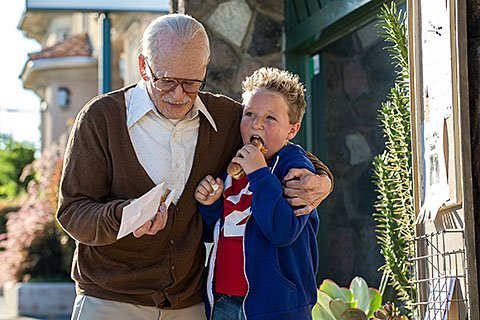 Despite coming out of the titular MTV franchise — in which reckless stunts are performed by people who are pretty obviously under the influence of banned substances — "Bad Grandpa" is surprisingly amiable, and also respectful of its setting.

Granted, considerable editing goes into a project like this. All the same, the film manages to portray the swath of red-state America between Lincoln, Neb., and Raleigh, N.C., as filled with chunky people who are kind, polite, indulgent to 8-year-old boys and to a leering comedian (Johnny Knoxville) made up as an 86-year-old grandfather.

They also seem much less trigger-happy than many news reports would have you believe.

Sacha Baron Cohen, in his 2006 "Borat" mockumentary, covered the same territory but ridiculed most of the Americans he encountered as humorless racist bumpkins. Knoxville’s jokes are almost entirely on himself. Of course, he learned long ago that no one judges you in a strip club — the setting for one of his lewd pranks.

The scripted part of the film, written by director Jeff Tremaine, Spike Jonze and Knoxville, has Knoxville as just-widowed octogenarian Irving Zisman, who has to drive his grandson Billy (Jackson Nicoll) from Nebraska to North Carolina because Billy’s mother, a crack addict, is going to jail for a parole violation.

Along the way, there’s a hideous "funeral" for Irving’s wife, an assortment of gags targeting woebegone convenience stores and a semi-intelligent stunt played on a parody-ripe beauty pageant for pre-teen girls.

Too many of Knoxville’s jokes are at crotch level, however, to make this, in the end, anything other than material to be avoided.