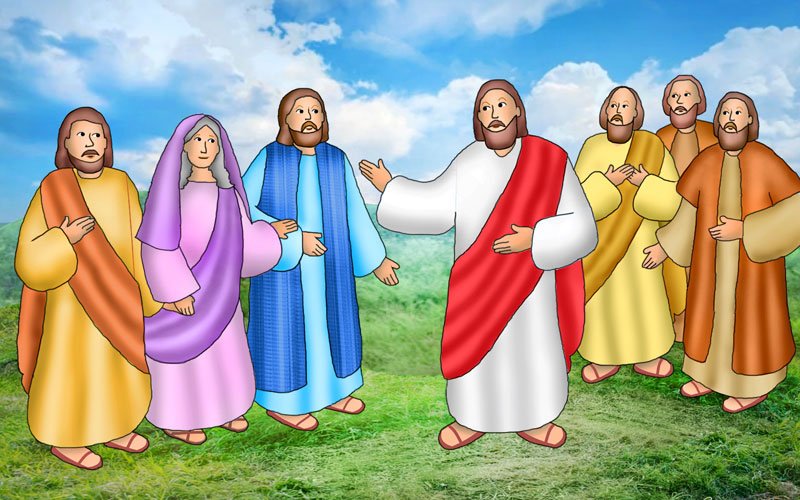 Jesus and the apostles were traveling around Galilee and Judea. Along the way, Jesus told parables and healed sick people.

He also took Peter, James and John up a mountain. He was transfigured before them; his face shone like the sun and his clothes became white as light. Moses and Elijah also appeared and spoke with Jesus, who told his friends not to tell what they saw until the Son of Man had been raised from the dead.

Jesus and the apostles then traveled to Jerusalem.

“Behold, we are going up to Jerusalem, and the Son of Man will be handed over to the chief priests and the scribes, and they will condemn him to death, and hand him over to the Gentiles to be mocked and scourged and crucified, and he will be raised on the third day,” Jesus told his friends.

A woman approached after he spoke. It was the mother of the apostles James and John, the sons of Zebedee.

James and John approached Jesus with their mother, who did Jesus homage.

“What do you wish?” Jesus asked.

“Command that these two sons of mine sit, one at your right and the other at your left, in your kingdom,” she said.

“You do not know what you are asking,” Jesus replied.

“Can you drink the chalice that I am going to drink?” he asked James and John.

“We can,” the brothers answered.

“My chalice you will indeed drink, but to sit at my right and at my left, this is not mine to give but is for those for whom it has been prepared by my Father,” he said.

When the rest of the apostles heard this, they became angry at James and John.

“You know that the rulers of the Gentiles lord it over them, and the great ones make their authority over them felt,” he said.

ESSAY: Describe a time when you assured someone that you could do something that was very hard.

James and John were two of the first four men whom Jesus called to be his apostles.

In Matthew 4, we read that James, John and their father, Zebedee, were mending nets in their boat when Jesus walked by and asked the brothers to follow him.

James and John were part of Jesus’ inner circle of friends, and they oftentimes were with Jesus during important times in his life.

In Matthew 17, we read that Jesus took Peter, James and John up a high mountain, where they witnessed his transfiguration.

In Matthew 26, we learn that after the Last Supper, Jesus and the apostles went to the Garden of Gethsemane. Jesus told most of the apostles to sit and wait for him while he went to pray, but he wanted Peter, James and John to join him.

In John 19, as Jesus was dying on the cross, he asked John to take care of Mary.

And in Mark 3, Jesus even gave the brothers a special name — Boanerges, which means “sons of thunder.”

After Jesus’ death, King Herod began persecuting Christians. In Acts 12, we read that Herod had James killed by the sword. James was the first apostle to be martyred.

John, however, escaped martyrdom and was eventually exiled to the island of Patmos. He reportedly lived to be a very old man and died in Ephesus.

St. Lucy Filippini was born in Italy in 1672 and was orphaned as a child. She found a spiritual father in the bishop of Montefiascone and Corneto, Italy.

The bishop wanted to educate young people, especially young women. Lucy helped him form the Institute of the Maestre Pie and founded and maintained girls’ schools around Italy. The institute became known as the Religious Teachers Filippini.