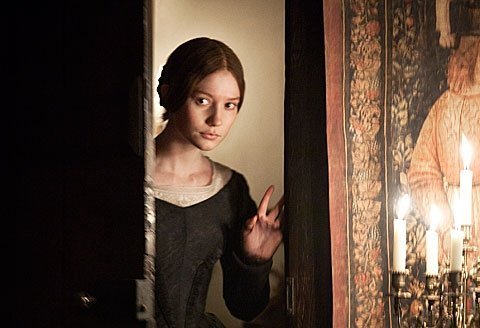 NEW YORK (CNS) — Charlotte Bronte’s classic novel gets the horror film treatment in "Jane Eyre" (Focus), an adaptation that remains true to the original story but ramps up the gothic and scary elements. Creepiness aside, this is a well-acted film that recreates a bygone era when individuality took a back seat to convention, and the weather was very wet indeed.

Mia Wasikowska, recently seen in the role of Alice wandering aimlessly through Wonderland, plays another lost soul in a strange place as the title character here. Told in flashback, the film opens to find young Jane (Amelia Clarkson) a 10-year-old orphan consigned to the "care" of her uncle’s family where she’s abused and unloved.

But Jane is no pushover, and her independent streak, strong character, and personal piety sustain her through the multiple miseries that are to come.

Jane is sent to a religious boarding school, where the mistreatment continues; it’s a fire-and-brimstone place where frequent mortifications are seen as the way to purge the body of sin. Needless to say, the prevailing Protestant Christianity is depicted as more repressive than uplifting. But Jane’s faith never wavers, focusing on God himself, not on his whip-wielding minister.

Jane endures until she is old enough to take a position as governess at Thornfield Hall, home of the enigmatic Edward Rochester (Michael Fassbender). He falls for Jane quite literally, tumbling off his bewitched horse when he first encounters her on a country lane. But it’s hardly love at first sight, since Rochester harbors demons that are gradually revealed in due course.

Jane focuses on her work, teaching Adele Varens (Romy Settbon Moore), a young French girl in Rochester’s care, while trying to understand the eccentricities of her spiritually tormented employer. Her guide and confidante is the busybody housekeeper Mrs. Fairfax (Judi Dench, who nearly steals the film). Thornfield Hall makes the Haunted Mansion look like child’s play. Watch out for things that go bump in the night — and who’s making all that racket in the attic?

Soon Rochester’s bedroom is on fire, and Jane saves his life — and melts his heart. They make plans to marry. But fate, of course, has other things in store for these star-crossed lovers.

Director Cary Joji Fukunaga ("Sin Nombre") makes the most of the English settings and, especially, the gloomy weather. The moors are misty, the rain is drenching, and the wind howls, while the manor houses are forbiddingly grand and the ladies’ corsets tight. The mood is appropriately claustrophobic as Jane struggles against the stiff customs and propriety of the age, all the while keeping her faith in God and upholding her moral code.

Possibly acceptable for mature teens, despite the elements listed below.

The film contains adult themes, some intense scenes of nonsexual child abuse, and an artistic nude image. The Catholic News Service classification is A-III — adults. The Motion Picture Association of America rating is PG-13 — parents strongly cautioned. Some material may be inappropriate for children under 13.