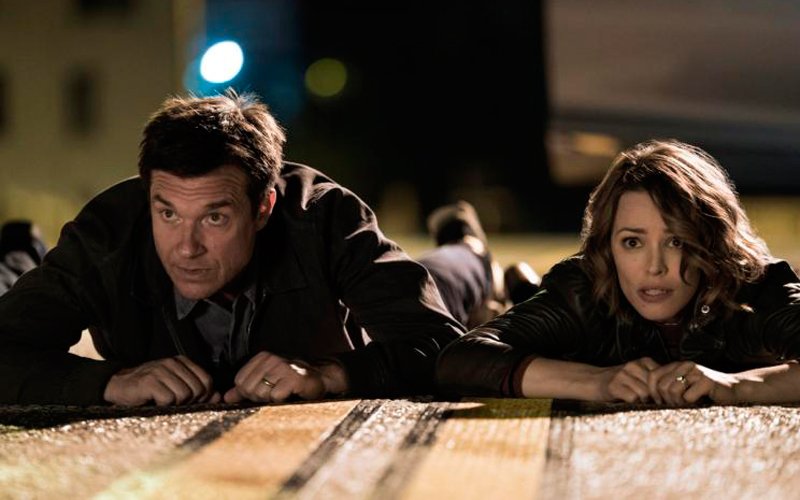 Jason Bateman and Rachel McAdams star in a scene from the movie "Game Night." (CNS photo by Warner Bros.)

NEW YORK (CNS) — Family values and much enjoyable humor are offset by numerous distasteful jokes and an excess of vulgar language in the comedy “Game Night” (Warner Bros.).

Competition-loving Max (Jason Bateman) and Annie (Rachel McAdams) cherish the frequent game nights they share with fellow couple Kevin (Lamorne Morris) and Michelle (Kylie Bunbury), bachelor Ryan (Billy Magnussen) and Ryan’s date du jour. Though their policeman neighbor Gary (Jesse Plemons) and his ex-wife used to be part of the mix as well, his painful divorce has accentuated Gary’s peculiarities, and they now shun him.

The ensemble’s placid evenings of fun are suddenly shaken up by the arrival in town of Max’s suave, domineering brother, Brooks (Kyle Chandler), a highly successful businessman of whom Max has always been jealous. In lieu of Risk or charades, Brooks arranges for something closer to a murder mystery party: a fake kidnapping that Max, Annie and their friends will have to vie with each other to solve.

As the audience realizes before the characters do, however, something all-too-authentically criminal soon begins to unfold amid the entertainment.

Though the film’s premise rests on an unlikely coincidence, some of the comedy it facilitates definitely works. Plemons, for instance, is hilarious as the awkward, vaguely sinister Gary. Less welcome is the fact that the often-wayward humor includes a few sight gags that are quite gory.

Despite its tendency go astray, though, screenwriter Mark Perez’s script does promote a positive view of marriage and parenthood. Additionally, Brooks’ materialistic lifestyle is shown in a negative light while Ryan’s taste for the company of bimbos is challenged when he invites brainy co-worker Sarah (Sharon Horgan) to join him on the fateful night and, despite themselves, they begin to fall for each other.

Though bedroom jokes and a surfeit of cuss words make it far too gamy for kids — as well as for most of their elders — such redeeming factors keep the movie from being deemed inappropriate fare for anyone.

The film contains much sexual humor, more than a dozen uses of profanity and several milder oaths and pervasive rough and crude language. The Catholic News Service classification is L — limited adult audience, films whose problematic content many adults would find troubling. The Motion Picture Association of America rating is R — restricted. Under 17 requires accompanying parent or adult guardian.