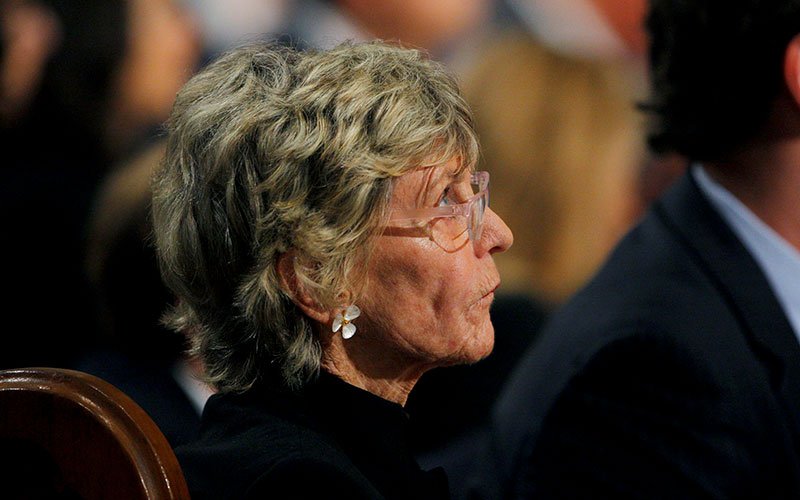 NEW YORK (CNS) — Jean Kennedy Smith, a diplomat, humanitarian and author and the last surviving sibling of the late President John F. Kennedy, died June 17 at her home in Manhattan. She was 92.

President Bill Clinton nominated her to serve as ambassador to Ireland in 1993, and she held the post until 1998.

When he nominated Smith, a 65-year-old widow, Clinton called her “as Irish as an American can be” and said she would make a great ambassador. Smith was a frequent visitor to Ireland, and her great-grandfather, Patrick Kennedy, was from Dunganstown in County Wexford in southeastern Ireland.

The Kennedys’ father, Joseph, was the American ambassador to the United Kingdom from 1938 to 1940.

At the time of her nomination her nephew, Joseph Kennedy II, then a Democratic House member from Massachusetts, called it a “tremendous appointment” and described his aunt as “a tough-minded individual.”

As ambassador she played a role in the Northern Ireland peace process. She also helped persuade Clinton to grant a U.S. a visa to Sinn Fein’s president, Gerry Adams, a move both criticized and lauded by many. The British government labeled Adams as a terrorist.

Smith was honored as Irish American of the Year by Irish America magazine in 1995 and was granted honorary Irish citizenship by then-President Mary McAleese in 1998. Smith was criticized by the Catholic bishops for taking communion in a Protestant cathedral in Dublin. The AP in its obituary on Smith said her action on communion was a show of support for McAleese, a fellow Catholic, who was criticized by the Irish bishops when she joined in a similar service.

She was a 1949 graduate of Manhattanville College in Purchase, New York, which at that was time run by the Religious of the Sacred Heart. The religious order founded it in 1841 as an academy for girls and in 1917 it became a women’s college. It became coeducational in 1971 and is today a secular college.

She married Stephen Edward Smith May 19, 1956. Smith was an executive with his family’s shipping business and later became a financial adviser. They worked together on JFK’s presidential campaign; Jean had been involved with her brother’s political efforts since he first ran for Congress in 1946.

She and her husband had four children: Stephen, William, Amanda and Kym. Stephen Edward Smith died in 1990.

Jean Kennedy Smith founded Very Special Arts in 1974 and served on its board of directors. The organization, an educational affiliate of the Kennedy Center, provides opportunities in the arts for disabled people through all 50 states and 60 countries.

She is the co-author with George Plimpton of “Chronicles of Courage: Very Special Artists,” published by Random House in 1993. She and Plimpton profiled interviewed 24 artists about how the arts helped them with their disabilities. Those interviewed range from a blind sculptor to a painter with paranoid schizophrenia.

In 2011, President Barack Obama presented her with the Medal of Freedom, for her work with people with disabilities. It is considered the nation’s highest civilian honor.

In her memoir “The Nine of Us,” published in 2016, she wrote that for much of the time her childhood seemed “unexceptional.”

“It is hard for me to fully comprehend that I was growing up with brothers who eventually (would) occupy the highest offices of our nation, including president of the United States,” she explained. “At the time, they were simply my playmates. They were the source of my amusement and the objects of my admiration.”

Smith is survived by her four children and two grandchildren. Her son William, now 59, who is a physician, was acquitted in December 1991 of a charge that he raped a woman at a Kennedy family home in Florida.