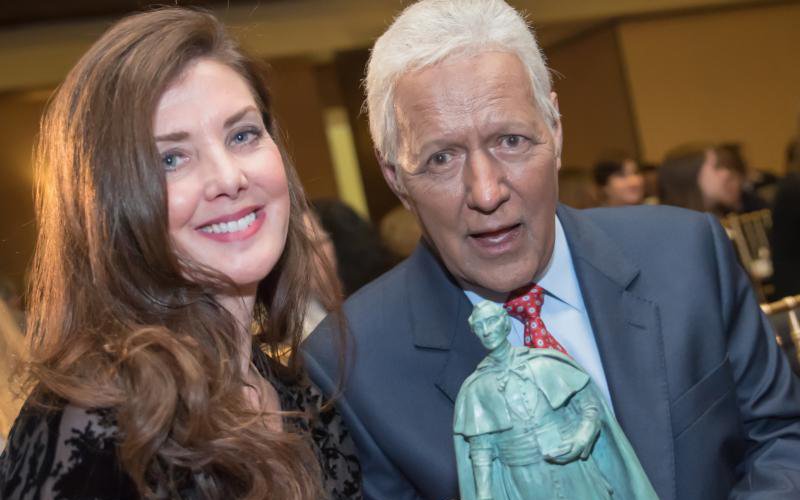 According to Tom Stoelker writing in Fordham News, this was the first time the award — which he described as “weighty statuette” of Fordham founder Archbishop John Hughes — has been presented outside of New York City.

Trebek, 79, has been at the helm of “Jeopardy” for 36 years. He has continued to host the classic game show even as he has undergone chemotherapy for stage 4 pancreatic cancer.

A year ago, he was told he has the disease. He responded well to chemotherapy and at one point announced he was “near remission,” but in August he said he had to resume a course of chemo treatment.

In her remarks, Jean Trebek said, “We understand how education, and probably more importantly, higher education, is one of the linchpins of society.”

“Once we are allowed to have the support that leads to an educated mind, that mind has the opportunity to be open and curious which allows for a fuller understanding and appreciation of our humanity both individually and collectively,” Jean Trebek said.

In 2015, the Trebeks established the Alex Trebek Endowed Scholarship with a $1 million for scholarship for students from the New York City neighborhood of Harlem. In 2019, they added another $1 million to the endowment to aid students from North Harlem and East Harlem.

Jesuit Father Joseph M. McShane, president of Fordham, said Alex Trebek, who was raised a Catholic, is “a brilliant man who is the nation’s schoolteacher.” If people think the “Jeopardy” host is a good man, “you don’t know the half of it,” the priest said. “He’s better than you think.” Father McShane called him a man of “quiet generosity.”

The Trebeks have two children, both of whom they sent to Jesuit schools. Daughter Emily is a 2015 graduate of Loyola Marymount University in Los Angeles. Son Matthew graduated from Fordham College at Rose Hill in 2013. Fordham College is the oldest of the university’s 11 schools.

On Jan. 8, during at the winter Television Critics Association press tour, Alex Trebek told TV writers that “some days are better than others” for him as he copes with cancer. He was scheduled to undergo a new round of tests in the days ahead, he said, and expected it would “maybe another week or so before I know where things stand.”