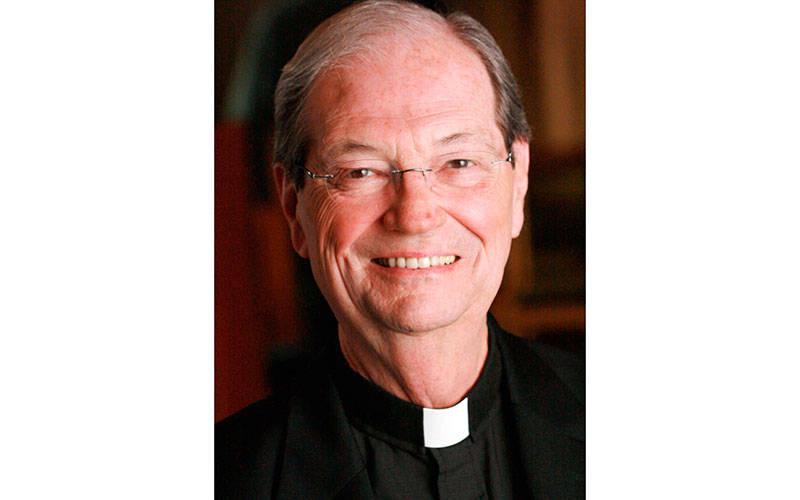 A New Jersey native, Father Salmon graduated from St. Peter’s Prep in 1954. He entered the Society of Jesus following a graduation, but left the order six months before completing his studies. In 1980, after working for 12 years in human resources and labor relations, Father Salmon asked to be readmitted to the Jesuits. He was ordained a priest in 1985 and professed his final vows in 1996.

Father Salmon twice was assigned to McQuaid Jesuit, spending a total of 14 years in Rochester. From 2002-2007, he taught theology and Latin while serving as superior of the Jesuit community and as faculty chaplain, helping instill Jesuit ideals among lay faculty and staff members.

Father Salmon stepped down from his role as presidentof McQuaid Jesuit in 2014. Before his resignation, the McQuaid community dedicated and renamed the student chapel as the Father Edward F. Salmon, S.J. Student Chapel, in gratitude for his commitment to the McQuaid community.

He and Jesuit Father Philip Judge, the current president of McQuaid, were not just colleagues, but also very close friends, having entered the Jesuits in 1980.
“Father Salmon was constantly bringing people together around the table, whether breaking open the Word, celebrating the Eucharist, or cooking some really wonderful meals over the year,” Father Judge said.
At McQuaid, “He always reminded McQuaid Jesuit that its first and last focus had to be on mission: ‘Creating men for and with others,’” he added. “Everything else followed if we kept that goal in mind.”
Between assignments at McQuaid Jesuit, Father Salmon served as the superor of the America House Jesuit community and as director of Ignatian identity at Regis High School, both in New York City.
Father Salmon had served as president of St. Peter’s Prep in Jersey City, NJ from 1987-90. He also led and directed retreats at spiritual centers and retreat houses throughout the U.S., Canada, North Wales and Venezuela.
“Of all the work he did, he most enjoyed doing spiritual direction and retreat ministry,” Father Judge said. “He helped so many people find or deepen a relationship with God.”
Calling hours for Father Salmon will be July 8, 2021, from 3 to 5 p.m. at the Chapel of the Holy Spirit in Campion Center, 319 Concord Road, Weston, Mass. His funeral Mass will be celebrated July 9 at 10 a.m., also at the Chapel of the Holy Spirit in Campon Center. Interment will take place Jesuit Cemetery in Auriesville, NY.
A memorial Mass will be celebrated at July 20 at 10 a.m. at Sacred Heart Cathedral in Rochester. All are welcome to attend.
Copyright © 2022 Catholic Courier, Inc. All rights reserved. Linking is encouraged, but republishing or redistributing, including by framing or similar means, without the publisher's prior written permission is prohibited.