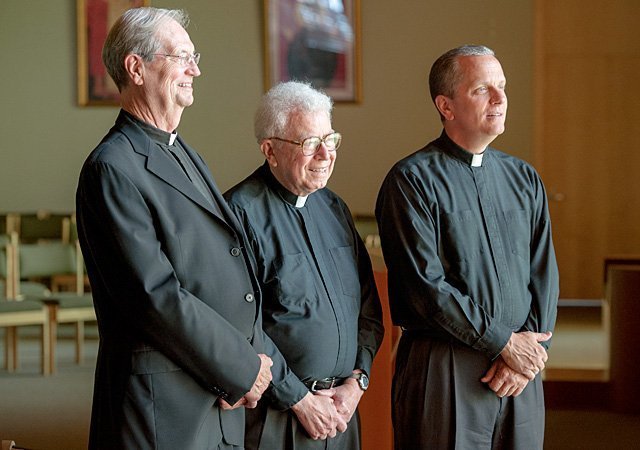 EDITOR’S NOTE: Inspired by Pope Francis’ declaration of the Year of Consecrated Life, this is the seventh installment in a series on religious communities in the Diocese of Rochester.

BRIGHTON — For more than 60 years, ministry by the Society of Jesus in the Rochester Diocese has been almost inextricably linked to McQuaid Jesuit High School.

Yet the Jesuits’ presence in these parts long predates McQuaid — going back to the mid-17th century, in fact.

That’s when Jesuit priests arrived as missionaries in the future Diocese of Rochester, working with Native American tribes over the span of a few decades in such present-day communities as Victor, Bloomfield and Honeoye Falls. Some 300 years later, in 1954, the religious order of men returned to the area to launch McQuaid, an all-boys’ high school. According to Father Robert Reiser, this development came about largely because of then-Bishop James E. Kearney’s high regard for the Jesuits.

"The church was growing (after World War II). There was a lot of need, and the bishop invited us in to address that need," said Father Reiser, the second-year president of McQuaid.

Today area Jesuits remain synonymous with McQuaid, which features the religious order’s name in its name along with that of Bishop Bernard J. McQuaid, the first Bishop of Rochester. The order’s link to the school is consistent with Jesuit priorities, which focus heavily on education along with missionary and charitable endeavors.

At McQuaid the Jesuits oversee a facility with a student body of 925 young men enrolled in grades 6 through 12 for the new school year.

Father John Carriero, a longtime guidance counselor who is beginning his 50th year at McQuaid, noted that the school has changed physically over the years with the expansion of classrooms as well as athletic and auditorium facilities. What remains unchanged, he said, is the caliber of youths that he and other Jesuits encounter.

Father Reiser noted that his order seeks to impart upon those young men "the Jesuit philosophy of educating the whole person — body, mind and soul," which enhances "a spirit-filled individual loved by God."

Father Edward Salmon, chancellor of McQuaid, acknowledged that nearly all of the school’s graduates go on to college. But he emphasized that the McQuaid experience should be, and is, much more than a stepping-stone for career aspirations.

"The reason why Jesuits came into existence was (that) a group of men came together to figure out how to get home to God," said Father Salmon, referring to St. Ignatius Loyola and six others who founded the Jesuit order in Europe in the 1530s. "Why are Jesuits in education? To help students get home to God."

Father Salmon serves as superior of the local Jesuit community, which in addition to Fathers Reiser and Carriero comprises Father Vincent McDonough, a retired longtime teacher at Elmira Notre Dame High School; Father James Coughlin, currently on sabbatical; and Kevin Hughes, a Jesuit scholastic who teaches at McQuaid as he prepares for priestly ordination.

And the order’s ministry is not limited to McQuaid. For instance, Father Salmon said he routinely provides sacramental assistance at Rochester-area parishes and that he and Father Reiser assist with Sunday-evening liturgies at Nazareth College. Meanwhile, Father Carriero — who is celebrating his 65th year as a Jesuit — has spent the past quarter-century as a chaplain at Monroe County Jail.

"Certainly one of the Jesuits’ characteristics, wherever they work, is to be of service to the bishop of the diocese," Father Salmon said.

Elsewhere in the Rochester Diocese, two Jesuits are active in Ithaca. Father Carsten Martensen serves as director of Catholic campus ministry at both Cornell University and Ithaca College, where he is assisted by Father Gerard McKeon.

According to the Society of Jesus website, the society comprises approximately 17,000 priests and brothers worldwide, making the Jesuits the largest male religious order in the Catholic Church. On the other hand, the Jesuits’ declining numbers in the United States have necessitated an ongoing consolidation of provinces. This trend has impacted McQuaid, which had 30-plus Jesuits on staff at its peak.

Whether with priests or lay teachers in the classrooms, Father Carriero said the top priority going forward is for McQuaid staff members to continue conveying Jesuit charisms.

"It always will be a Jesuit education that students will get here," he stated.