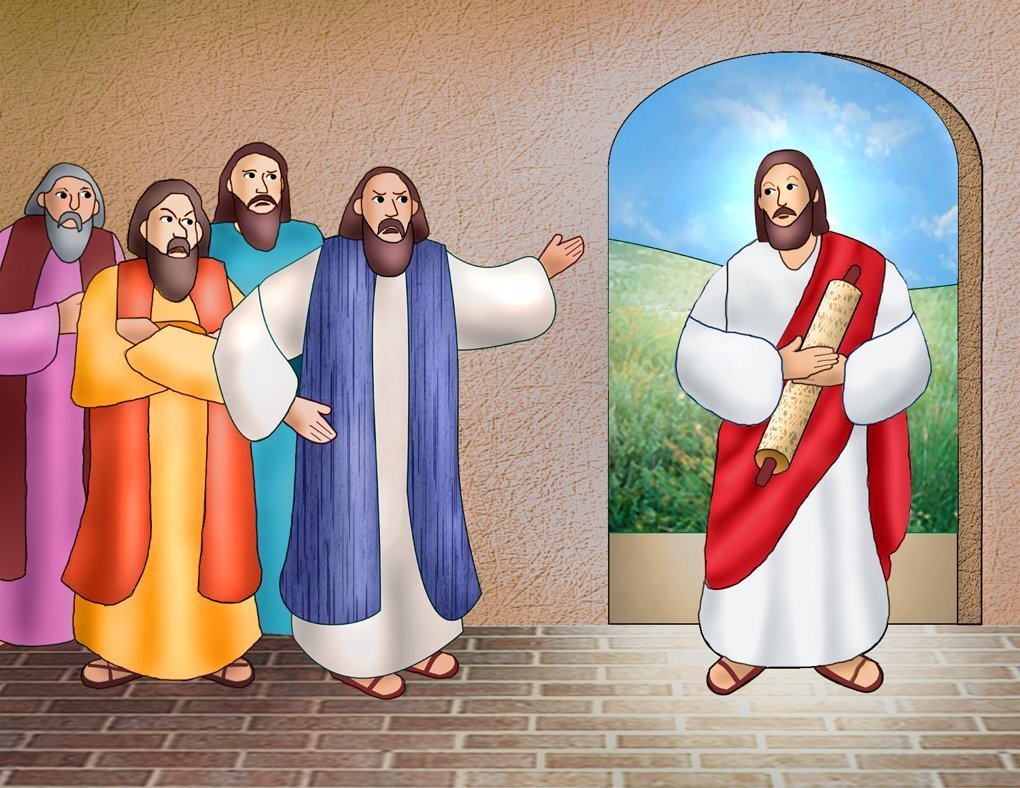 Jesus was in the synagogue on the Sabbath day. Someone handed him a scroll, which contained a passage from the prophet Isaiah. He unrolled the scroll and read out loud. “The Spirit of the Lord is upon me, because he has anointed me to bring glad tidings to the poor. He has sent me to proclaim liberty to captives and recovery of sight to the blind, to let the oppressed go free, and to proclaim a year acceptable to the Lord.”

Jesus rolled the scroll back up and handed it to the attendant. Then he looked at the people in the synagogue and said to them, “Today this scripture passage is fulfilled in your hearing.”

Everyone was amazed by what Jesus said, and how politely and respectfully he spoke to them. They also asked each other, “Isn’t this the son of Joseph?”

Jesus, knowing the thoughts and questions of the people, said, “Surely you will quote me this proverb, ‘Physician, cure yourself’ … Amen, I say to you, no prophet is accepted in his own place.” Then Jesus reminded them of the prophet Elijah who was not sent to help a widow in Israel, but one who was in Sidon. And also of Elisha, who did not cleanse the lepers of Israel, but only Naaman, who lived in Syria.

When the people heard these words, they no longer praised the gracious words of Jesus. Instead they felt insulted and became very angry. They rose up not as a group, but as a mob that wanted to hurt Jesus. They tried to take him to the top of a nearby hill and throw him off of it, but the Spirit protected Jesus, and he walked through the crowd of people without being noticed, and he left in safety.

After leaving the synagogue, Jesus went to Capernaum, which is in Galilee. Once again, he amazed the people there with his words of wisdom. A man with an unclean spirit challenged Jesus by saying, “What have you to do with us, Jesus of Nazareth? Have you come to destroy us? I know who you are — the Holy One of God.”

Jesus said to the spirit in the man, “Be quiet! Come out of him!” The spirit threw the man on the ground, but came out of the man without harming him. The story of this miracle quickly spread about the power and authority of Jesus.

READ MORE ABOUT IT:
Luke 4

Q&A
1. What did Jesus say after he read from the scroll?
2. Who did the unclean spirit say Jesus was?

If someone was sick during the time of the Old Testament, there was no clinic or hospital to go to. There were no doctors as we know them today, either. Most medicines they had at the time were made from herbs and other plants and certain oils. Olive oil and sometimes honey were used as salves to treat wounds, and wine was one of the few painkillers available. By the time of the New Testament there were practicing doctors, but their knowledge of medicine and biology was still very basic. Luke was a doctor. Archaeologists have discovered some evidence that some doctors were surgeons who treated broken bones and even head injuries. Some of the plant-based and herbal medicines discovered so many years ago are still used today because of their effectiveness. Many years from now, some of the medical practices that are used today may seem strange to the people of the future. Let us always pray to God for good health.

Wulfstan (1008-1095) was born in Warwickshire, England, and eventually ordained a priest. During a certain Mass the delicious smell of roasting beef drifted in through the church window. Because Wulfstan was distracted by the aroma, he vowed to be a vegetarian from that point on. He did not want anything to interfere with his concentration during Mass or private prayer. When he was serving as a novice in Worcester, he taught young children and eventually was treasurer of the church. In spite of his busy schedule, he devoted many hours to devotion, often staying awake all night in prayer. When he was appointed bishop, he would deliver eloquent sermons that earned him the love and admiration of his congregations. When he had young men studying under him, he would expect them to follow his example by performing menial duties, such as cleaning in the kitchen and serving meals to the poor. We remember him on Jan. 19.