Jesus and his friends prepare for the Passover - Catholic Courier 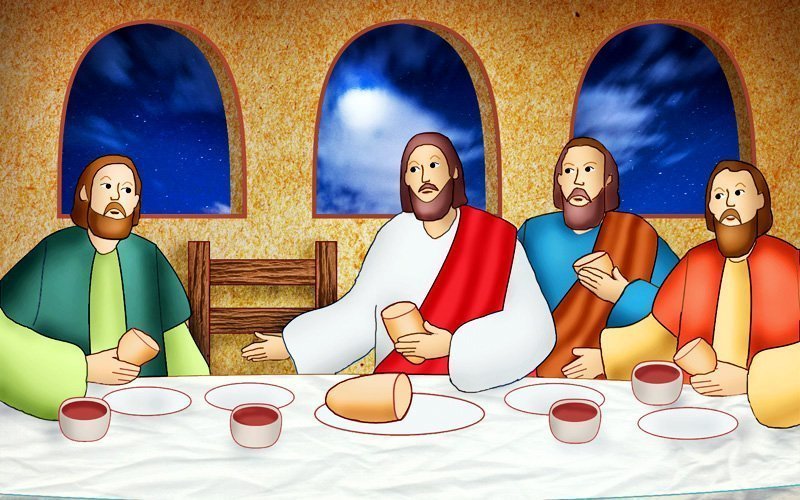 Jesus and his friends prepare for the Passover;

Saint for Today: St.Benedict the Moor

Jesus and his friends prepare for the Passover

Jesus and his apostles traveled to Jerusalem to celebrate the Passover and the Feast of Unleavened Bread.

Two days before the feast, the chief priests and scribes were plotting to have Jesus arrested and killed.

“Not during the festival,” they said, because they feared the people would riot.

In the meantime, Jesus and the apostles went to the home of Simon the leper to share a meal with him.

After the meal, one of the apostles, Judas Iscariot, sneaked off to visit the chief priests and scribes. He offered to hand over Jesus to them, and they agreed to pay Judas for betraying Jesus.

On the first day of the Feast of Unleavened Bread, the apostles asked Jesus where they would be eating their meal. Jesus told two of them to talk to a certain man, who would show them an upper room that was furnished and ready for them to use.

In the evening, Jesus and his friends gathered in the room to eat the Passover meal. While they were sitting at the table, Jesus made an announcement that shocked the apostles.

“Amen, I say to you, one of you will betray me, one who is eating with me,” he said. “For the Son of Man indeed goes, as it is written of him, but woe to that man by whom the Son of Man is betrayed. It would be better for that man if he had never been born.”

As they continued to eat the Passover meal, Jesus picked up some bread and blessed it.

“Take it,” he told his friends as they handed them pieces of bread, “this is my body.”

Then Jesus took a cup. After he gave thanks, he handed the cup to each of his friends, and they all drank from it.

“This is my blood of the covenant, which will be shed for many,” Jesus said. “Amen, I say to you, I shall not drink again the fruit of the vine until the day when I drink it new in the kingdom of God.”

Afterward, they went to the Mount of Olives, where Jesus prayed with three of his apostles. When he finished praying, he told his friends that the time of his betrayal was at hand.

1. Who decided to betray Jesus?

2. What did Jesus bless and give to the apostles to eat?

Just days before he was crucified and died, Jesus traveled to Jerusalem with his apostles to celebrate the Passover.

The Passover was a very important celebration for the Jews. On that day, they gathered together in Jerusalem to remember how God had freed them from slavery in Egypt.

In Matthew 21, we read that Jesus entered the city riding upon a donkey and a colt, which fulfilled an Old Testament prophecy about him.

There was a large crowd of people who saw Jesus coming. As he rode by, they shouted excitedly, and many people placed their cloaks or tree branches on the road for Jesus to ride over.

“Hosanna to the Son of David; blessed is he who comes in the name of the Lord; hosanna in the highest,” the people in the crowd said.

“Who is this?” some people asked when they heard all the commotion.

“This is Jesus the prophet, from Nazareth in Galilee,” the people replied.

Every year, Christians remember Jesus’ entry into Jerusalem for the Passover. This remembrance takes place on the Sunday before Easter, which is called Palm Sunday.

St. Benedict the Moor was born in Sicily in 1526. His parents were slaves, but as the eldest child, he was freed.

Nicknamed “the holy Moor” because of his faithfulness and good works, he became a hermit.

He eventually became a Franciscan lay brother and worked as a cook in a convent near Palermo, Sicily. Many people came to visit the convent because Benedict was so holy and also was known for his miracles. Even though he could not read or write, he was named the convent’s superior.

He died in 1589. On April 4, we honor Benedict, who is the patron saint of Palermo and of blacks in the United States.

A. __ Jesus is scourged and crowned with thorns

C. __ Jesus in the Garden of Gethsemane

D. __ Jesus is condemned by the Sanhedrin

F. __ Jesus is judged by Pilate

G. __ Jesus is helped by Simon the Cyrenian to carry the cross

I. __ Jesus is crucified

J. __ Jesus is denied by Peter

K. __ Jesus promises his kingdom to the good thief