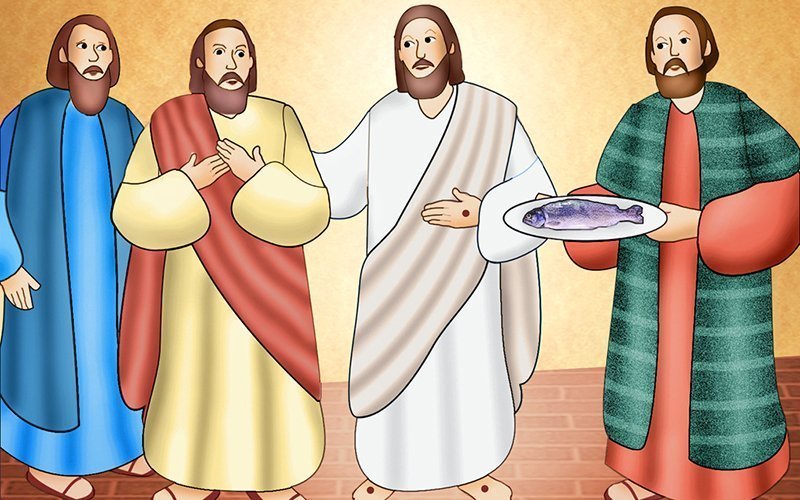 Jesus appears to his disciples

Jesus appears to his disciples

Jesus had been crucified, and he was dead. But that was not the end. When Mary had gone to visit the tomb, she found it empty, and Jesus was gone. Then he appeared to her. Later he also appeared to Peter.

Jesus also walked along with two of the disciples on the road to Emmaus, but as he talked to them, he prevented them from recognizing him. He pretended not to know about the events that had just happened, so they told him about them. Then he also told them about the Scriptures, and later he revealed to them who he was.

When all of the disciples were talking about what had happened, Jesus suddenly was with them and said, “Peace be with you.” They reacted as if they had seen a ghost.

Then Jesus asked them, “Why are you troubled? And why do questions arise in your hearts?” He moved closer to his friends he stretched out his hands, palms up. “Look at my hands and my feet, that it is I myself.” Jesus could see that his disciples were still unable to believe that it really was him. “Touch me and see,” he told them, “because a ghost does not have flesh and bones as you can see I have.”

Then the disciples believed and knew that it was Jesus and he was alive again. They rejoiced to have him back with them.

“Have you anything here to eat?” Jesus asked. The disciples had some baked fish, and they shared that with Jesus. After he had eaten, Jesus said, “These are my words that I spoke to you while I was still with you, that everything written about me in the law of Moses and in the prophets and psalms must be fulfilled.”

Jesus wanted his disciples to understand as much as possible before he left them. “Thus it is written that the Messiah would suffer and rise from the dead on the third day and that repentance, for the forgiveness of sins, would be preached in his name to all the nations, beginning from Jerusalem. You are witnesses of these things.”

When he was sure that his disciples were paying close attention to what he was telling them, Jesus said, “And (behold) I am sending the promise of my Father upon you; but stay in the city until you are clothed with power from on high.”

READ MORE ABOUT IT:
Luke 24

Q&A
1. How did the disciples react when they first saw Jesus?
2. What did Jesus tell his disciples to wait for?

Luke wrote one of the four Gospels. He used eyewitness accounts and several written sources for his work, one being the Gospel of Mark.

In the first chapter of Luke, the author tells a man named Theophilus that he wanted to write a narrative of the life of Jesus “in an orderly sequence.” Throughout his writings, Luke frequently uses the Greek instead of Hebrew or Aramaic for the names of some of the people and places he talks about. This indicates he was probably trying to reach Gentiles as well as Jews. Luke also is said to be the author of the Acts of the Apostles.

As a result of Luke’s writings, we have his perspective on the life of Jesus and a history of the early Christians and the foundation of the church.

Peter Louis Mary Chanel (1803-1841) was born in France and tended his father’s sheep when he was a boy. Fortunately, the local priest noticed an intelligence and pureness of spirit in the boy that prompted him to ask Peter’s parents if he could enroll Peter in the Latin school of the diocese. Peter started attending school, and his pleasant personality earned him the respect of his teachers and the other students. After he was ordained a priest, he served in a very difficult parish neighborhood. Wanting to become a missionary, he joined the Society of Mary, but they assigned him as a teacher for several years. In 1836 Peter was part of a missionary team to the Pacific islands. Peter and the missionaries converted many pagans to Christianity, but when the king’s son asked to be baptized, the king became furious and ordered missionaries killed. We honor him on March 28.