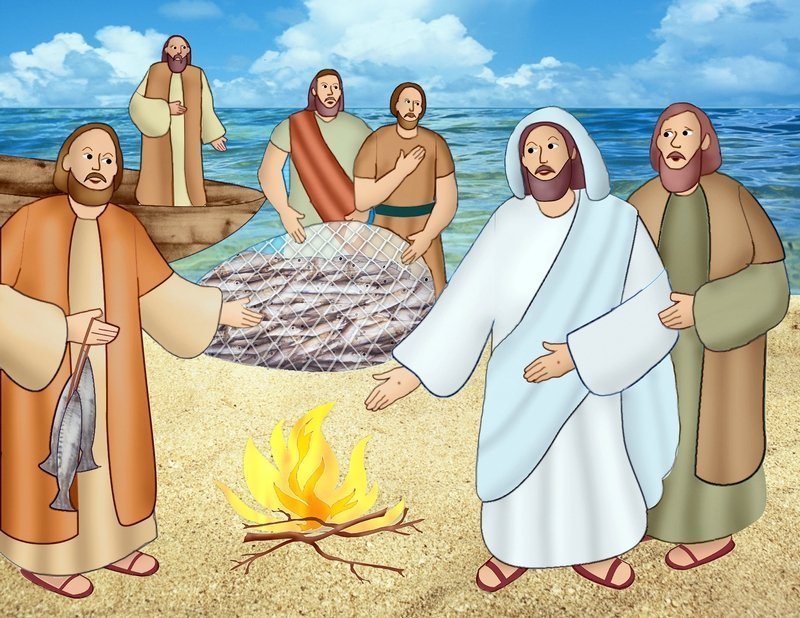 Jesus teaches about sin and forgiveness

One day, soon after Jesus’ resurrection, seven of the apostles were at the Sea of Tiberias. One of them was Simon Peter, who decided to go fishing. The rest of his friends decided to go along.

They cast their net all night long but did not catch any fish. As the sun began to rise, they decided to head toward shore.

As they got close to land, they noticed a man standing on the beach. He was trying to get their attention.

“Children, have you caught anything to eat?” the man shouted over the sound of the waves.

When the apostles said no, the man told them where to cast their net. They listened, and they caught so many fish that they could not drag the net onto the boat.

Suddenly, the apostle whom Jesus loved recognized the man.

When Simon Peter heard this, he jumped into the sea and swam to shore. The rest of the apostles came in on the boat.

Jesus had started a fire and had cooked some fish on it. He also had some bread. As the apostles drew near, he said, “Come, have breakfast.” None of the disciples dared to ask who he was, because they realized it was the Lord. This was the third time Jesus had appeared to his friends after his resurrection.

Jesus took the bread and gave it to them. Then he did the same thing with the fish. After everyone had finished eating, Jesus turned to Simon Peter.

“Simon, son of John, do you love me more than these?” the Lord asked.

Simon Peter answered, “Yes, Lord, you know that I love you.”

Twice more Jesus asked whether Simon Peter loved him, and each time the apostle said yes. In reply, Jesus told Simon Peter to tend his sheep, then to feed his sheep.

“Amen, amen, I say to you, when you were younger, you used to dress yourself and go where you wanted; but when you grow old, you will stretch out your hands, and someone else will dress you and lead you where you do not want to go,” Jesus said.

When the Lord finished speaking, he said to Simon Peter: “Follow me.”

1. Who was the man on shore calling to the apostles?

2. What did Jesus tell Simon Peter to do?

Simon Peter was a very important apostle. Based on some things Jesus said to him, and because of some of the responsibilities the Lord gave him, the Catholic Church sees Simon Peter as the first pope.

For example, in Matthew 16, Jesus asked his apostles who they thought he was. It was Simon Peter who answered, “You are the Messiah, the Son of the living God.”

Jesus told Simon Peter that he was blessed, because no man could have given the correct answer on his own. That knowledge came to Simon Peter directly from God.

“And so I say to you, you are Peter, and upon this rock I will build my church, and the gates of the netherworld shall not prevail against it. I will give you the keys to the kingdom of heaven. Whatever you bind on earth shall be bound in heaven; and whatever you loose on earth shall be loosed in heaven,” Jesus told Simon Peter.

In John 21, it was Simon Peter whom the resurrected Jesus commanded to feed and tend his lambs and sheep. Jesus was referring to the people of God, who would need an earthly shepherd to help them after Jesus returned to his father in heaven.

Also in John 21, it was Simon Peter to whom Jesus gave this command: “Follow me.”

When she was 14, she had 18 visions at the nearby River Gave. The lady she saw in her visions told her to have a chapel built there. She wanted people to be able to drink from and wash in the water that flowed from a place in the ground where Bernadette had dug. In one of the visions, the lady said she was the “Immaculate Conception.”

Bernadette eventually joined the sisters of Notre-Dame de Nevers. She was plagued by bad health, and she died in 1879 at age 35.