Jesus appears to the disciples and others - Catholic Courier 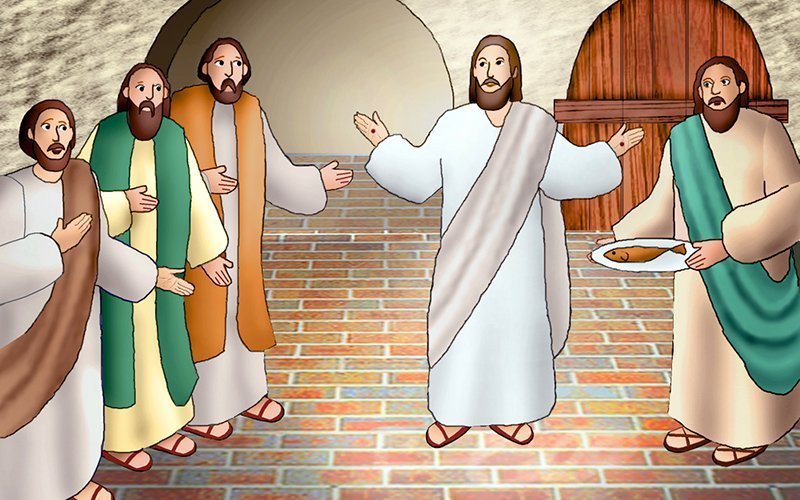 Jesus appears to the disciples and others

Jesus appears to the disciples and others

The 11 disciples who had remained faithful to Jesus were in a room together with other people who loved the Lord. They were wondering if the rumors that Jesus had come back to life were true. Suddenly a man appeared in the middle of the room. It was Jesus. “Peace be with you,” he said.

The disciples’ first reaction was fear, not joy. They thought they were looking at a ghost. “Why are you troubled?” Jesus asked. “And why do questions arise in your hearts?” As his friends continued to stare at him, Jesus smiled stretched his arms forward with his palms up. “Look at my hands and my feet, that is I myself. Touch me and see, because a ghost does not have flesh and bones as you can see I have.”

No one reached out to touch Jesus, but they began to believe. And they were happy to see him. “Have you anything to eat?” Jesus asked. Someone brought him a piece of baked fish, which he ate immediately. When he was sure that his friends were ready to listen to him, Jesus began to teach them about the Scriptures.

” … Everything written about me in the law of Moses and in the prophets and in the psalms must be fulfilled. Thus it is written that the Messiah would suffer and rise from the dead on the third day and that repentance, for the forgiveness of sins, would be preached in his name to all the nations, beginning from Jerusalem.”

Jesus paused and looked in the faces of the people in the room. Then he said directly, “You are witnesses of these things. And behold I am sending the promise of my Father upon you; but stay in the city until you are clothed with power from on high.”

Jesus let the people in the room think about his words for a short time, then he opened the door and motioned for them to follow him out. He walked through the streets of the city and on to Bethany. He stopped there, turned around and raised his hands while he blessed everyone. As he finished his blessing, Jesus was taken up into heaven.

The disciples and the others who had seen Jesus go to be with his Father were filled with a spirit of rejoicing. They returned to Jerusalem singing and praising God.

READ MORE ABOUT IT:
Luke 24

Q&A
1. How did the disciples react when they saw Jesus?
2. What happened after Jesus blessed his friends?

The story of how Solomon built the very first temple can be found the First Book of Kings. Before Jesus was born, King Herod built a new temple based on the designs of Solomon.

Synagogues were places of worship where the Jewish people would come together to pray, read Scriptures and listen to sermons, similar to the purpose to our churches of today.

A council of elders was responsible for the services, the education of the people and the maintenance of the building. Prayers were said daily, and a more formal service was held on the Sabbath.

Zita (1218-1268) came from a very religious family. Her parents raised their children to love and serve the Lord as much as they did. Zita’s sister became a Cistercian nun, and her uncle was a religious hermit who was treated as a saint by the people of the community.

When she was 12 years old, Zita became a house servant for a family that owned a fabric-making shop. She would get up early every morning to pray before she started her chores. She was given good food for her meals, but she often shared it with the poor people of the town. She also would sleep on the floor when she offered her warm bed to a homeless person.

Zita felt a special concern for prisoners, and she prayed regularly for them. Her life was full of works of mercy and compassion. We honor her on April 27.