Jesus appears to two of his followers - Catholic Courier 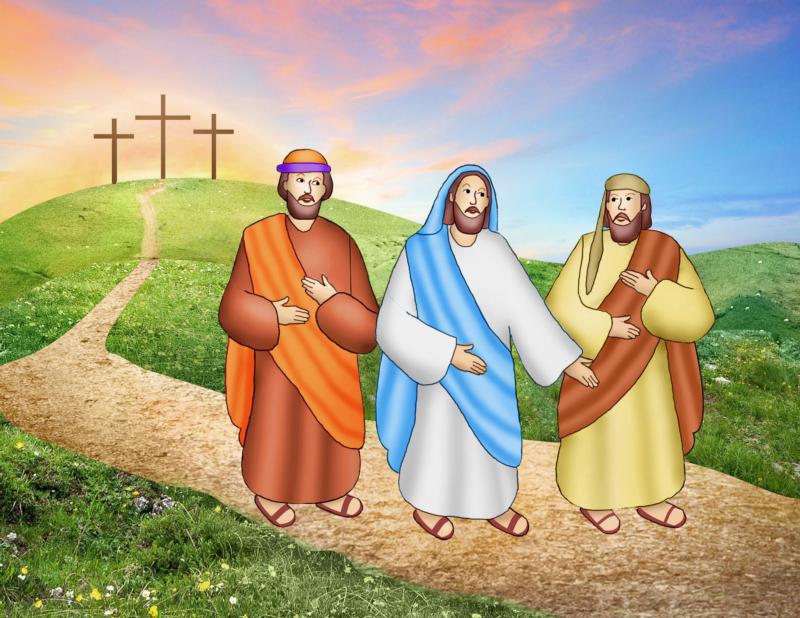 This is the artwork for Kids' Chronicle for April 26, 2020. (Illustration by Linda Rivers)

Jesus appears to two of his followers

Jesus appears to two of his followers

Two of Jesus’ followers were walking from Jerusalem to Emmaus. Along the way, they talked about Jesus’ arrest, crucifixion and death.

Just then, Jesus began walking with them, although they did not recognize him.

“What are you discussing as you walk along?” he asked.

“Are you the only visitor to Jerusalem who does not know of the things that have taken place there in these days?” asked one of the men.

“What sort of things?” Jesus replied.

“The things that happened to Jesus the Nazarene, who was a prophet mighty in deed and word before God and all the people, how our chief priests and rulers both handed him over to a sentence of death and crucified him,” the men explained.

“But we were hoping that he would be the one to redeem Israel; and besides all this, it is now the third day since this took place.”

The men then told Jesus that the women in their group had shared some amazing news. They were at the tomb that morning and found it empty, and angels told them that Jesus was alive.

Jesus looked at the pair.

“Oh, how foolish you are! How slow of heart to believe all that the prophets spoke!” he exclaimed. “Was it not necessary that the Christ should suffer these things and enter into his glory?”

Then, beginning with Moses and the prophets, Jesus interpreted all of the Scriptures that pertained to him, the Messiah.

As the trio reached Emmaus, it looked like Jesus planned to walk on.

“Stay with us,” the men urged, “for it is nearly evening and the day is almost over.”

So, Jesus stayed with the men and ate a meal. As Jesus took the bread, blessed it, broke it and shared it with them, the men’s eyes were opened. They recognized Jesus, but he vanished from their sight.

“Were not our hearts burning within us while he spoke to us on the way and opened the Scriptures to us?” the men said.

The men returned to Jerusalem and found the apostles.

“The Lord has truly been raised and has appeared to Simon!” they said.

1. What village were the two men walking to?

2. What did Jesus interpret for the men?

TRIVIA: How many miles was it from Jerusalem to Emmaus? (Hint: Luke 24:13)

For example, in Matthew 28:1-10, we read that Mary Magdalene and another woman found Jesus’ empty tomb. An angel told them Jesus had risen. As the two women rushed back to inform the apostles, Jesus met them on their way and greeted them. The woman embraced his feet and did him homage.

In John 20:19-29, Jesus twice appeared to the apostles. The first time, the apostle Thomas was not there and did not believe that his friends had seen Jesus.

The second time, Jesus appeared to the apostles, Thomas was there and believed.

And in John 21, Jesus appeared to seven of his followers, who were at the Sea of Tiberias fishing. The men saw Jesus on the shore but did not recognize him.

Jesus asked his friends if they had caught any fish. When they said that they had not, Jesus told them to cast their net to the right of the boat. The men caught so many fish that they could not pull the net into the boat.

The disciple whom Jesus loved then recognized Jesus.

“It is the Lord,” he said as he jumped into the sea and rushed to shore toward Jesus.

St. Rose Venerini was born in Viterbo, Italy, in 1656. She entered a convent when her fiance died, but she returned home for a time to take care of her widowed mother.

St. Rose became a teacher and opened a free school for girls in 1685. An Italian bishop asked her in 1692 to train teachers and oversee a school. She soon was setting up schools all over Italy.

Despite opposition, the order she founded, the Venerini Sisters, was recognized as a congregation after her death in 1728.

Answers: our he burning us were spoke not hearts within while

Were not our hearts burning within us while he spoke.