Jesus ascends to his Father in heaven - Catholic Courier 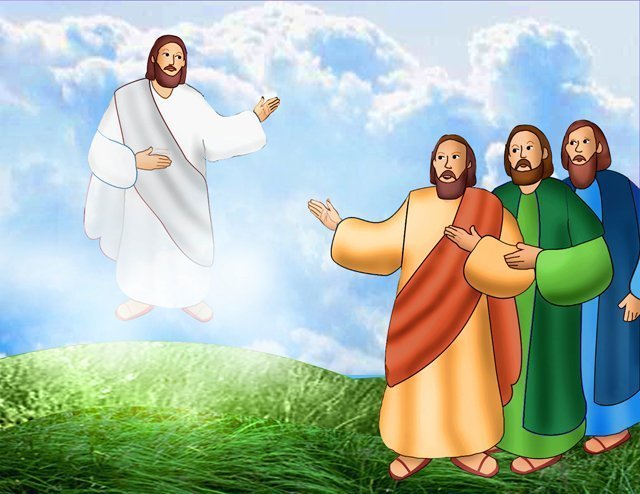 Jesus ascends to his Father in heaven

Jesus ascends to his Father in heaven

After Jesus was resurrected, he appeared to his apostles many times over a period of 40 days. When he visited his friends, he talked about God’s kingdom and how they should stay in Jerusalem and wait for “the promise of the Father about which you have heard me speak, for John baptized with water, but in a few days you will be baptized with the holy Spirit.”

At the end of the 40 days, the apostles gathered together with Jesus at the mount called Olivet.

“You will receive power when the holy Spirit comes upon you, and you will be my witnesses in Jerusalem, throughout Judea and Samaria, and to the ends of the earth,” he told his friends.

When he finished speaking, Jesus was lifted into the air by a cloud and vanished from sight.

The apostles returned to Jerusalem, as Jesus had asked. Peter stood up and spoke to the apostles and a group of people who believed that Jesus was the Messiah.

“My brothers,” Peter said, “the scripture had to be fulfilled which the holy Spirit spoke beforehand through the mouth of David, concerning Judas, who was the guide for those who arrested Jesus. He was numbered among us and was allotted a share in this ministry. … For it is written in the Book of Psalms: ‘May another take his office.'”

Peter suggested that Judas’ replacement should be someone who was with Jesus from his baptism to his ascension into heaven. Two men were chosen: Matthias and Joseph, who also was known as Barsabbas or Justus.

Then they prayed, “You, Lord, who know the hearts of all, show which one of these two you have chosen to take the place in this apostolic ministry from which Judas turned away to go to his own place.”

Then lots were given to the people. The lot fell upon Matthias, and he became the new 12th apostle.

1. What did Jesus promise to send to the apostles?

2. Which apostle was being replaced?

In biblical times, certain numbers were considered to be sacred or perfect. One of those was the number 12, which is mentioned many times throughout the Bible.

For example, Genesis 46 lists the names of Jacob’s 12 sons, who became the heads of the 12 tribes of Israel.

In Leviticus 24, God told the people that every week they were to bake 12 cakes using bran flour, place them in two piles of six on the gold table before the Lord and put pure frankincense on them as a bread offering.

In the New Testament, Jesus chose 12 men to be his apostles.

In Revelation 7, it is written that 144,000 people — 12,000 people from each of Israel’s 12 tribes — will be marked with a seal upon their foreheads, which shows they are servants of God.

And in Revelation 21, the New Jerusalem is described as having 12 gates, each one inscribed with the name of a tribe of Israel.

He worked hard to establish Christianity in Upper Sweden and built the first large church in his country. He went to war with the people of Finland, and when he won, he asked the Bishop of Uppsala, who was English, to stay on to evangelize the Finns.

Not everyone liked the saint’s devotion to the faith. Some Swedish nobles plotted against him with the king of Denmark. In 1160, St. Eric was at Mass when news came that the Danish army and some Swedish rebels were coming for him. After Mass was over, he marched out to meet them. He was beaten off his horse by the rebels and beheaded.