Jesus asks a rich man to follow him - Catholic Courier 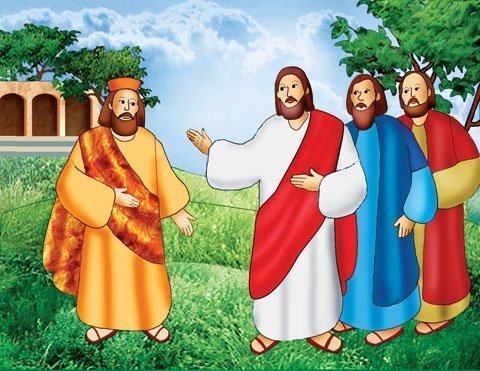 Just as Jesus was leaving a village in Judea where he had been preaching, a man came up to him and kneeled down in front of him. “Good teacher,” the man asked, “what must I do to inherit eternal life?”

Jesus said to the man, “Why do you call me good? No one is good but God alone.” Then Jesus reminded the man about the importance of the Ten Commandments.

“Teacher, all of these I have observed from my youth.”

Jesus looked at the man with love and said, “You are lacking in one thing. Go, sell what you have and give to (the) poor and you will have treasure in heaven; then come, follow me.”

This request caused the man to be unhappy. He was very rich and did not want to part with his money or the many things he owned. He walked away without asking anything more of Jesus.

The apostles looked at each other and wondered, “Then who can be saved?”

Jesus told them, “For human beings it impossible, but not for God.”

Peter said to Jesus, “We have given up everything and followed you.”

“Amen, I say to you, there is no one who has given up house or brothers or sisters or mother or father or children or lands for my sake and for the sake of the gospel who will not receive a hundred times more now in this present age.” And Jesus added, “But many that are first will be last, and (the) last will be first.”

Jesus continued on his journey toward Jerusalem. As he walked, he said to his apostles, “Behold, we are going up to Jerusalem, and the Son of Man will be handed over to the chief priests and the scribes, and they will condemn him to death and hand him over to the Gentiles who will mock him, spit upon him, scourge him, and put him to death, but after three days he will rise.”

Q&A
1. Why did the rich man go away unhappy?
2. What did Jesus say would happen in Jerusalem?

The Bible is the most important book in our faith. The Catechism of the Catholic Church encourages every Christian to make time for “frequent reading of the divine Scriptures.” (Entry 133) In order for us to be able to study the Scriptures, the Bible is divided into the Old Testament and the New Testament. The Old Testament tells us about events that took place before the birth of Christ, and the New Testament tells us about his life and teachings. The testaments each contain books that have been further divided into numbered chapters and verses. This numbering system helps us to find passages in the Bible quickly and easily. For example, Genesis 1:1 means the Book of Genesis, chapter 1, verse 1. We should know how the Bible has been put together and what it is trying to say to us as Christians.

Luke (d. first century) was the author of the Gospel that bears his name and the Book of the Acts of the Apostles. From references made in the New Testament, we know that he was a Gentile (meaning he was not a Jew), he was a doctor and he frequently traveled with Paul on his missionary journeys. Because of this work, we have a good record of Paul’s work spreading the good news, and also of the difficulties Paul had to deal with, which included health problems, persecution and even arrests. When Paul was near death, Luke was with him. Because of Luke we know about Paul, but what happened to Luke after Paul’s death is uncertain. We honor this important man on Oct. 18.