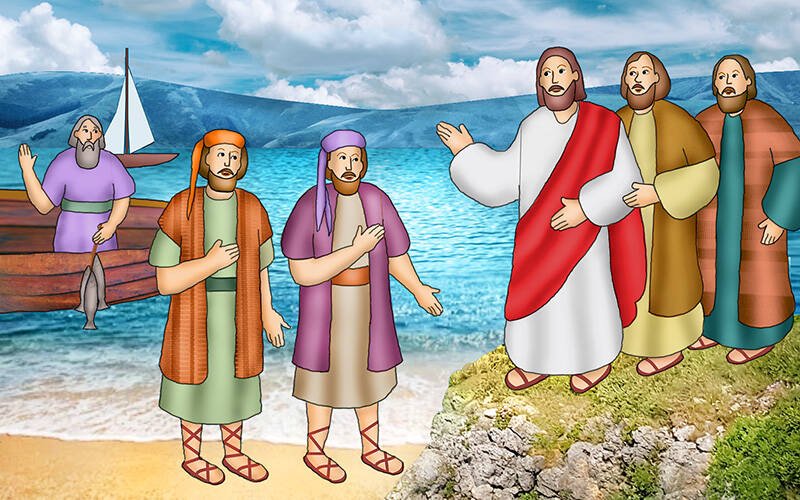 The Holy Spirit led Jesus into the desert, where he fasted for 40 days and nights.

When he was done fasting, the devil came and tried to tempt Jesus to worship him, but Jesus refused.

After the devil left him, Jesus came out of the desert. That’s when he learned that John the Baptist had been arrested.

Jesus decided to leave Nazareth and withdraw to Galilee. He went to live in Capernaum by the sea, in the region of Zebulun and Naphtali, so that the words of the prophet Isaiah could be fulfilled:

“Land of Zebulun and land of Naphtali, the way to the sea, beyond the Jordan, Galilee of the gentiles, the people who sit in darkness have seen a great light, on those dwelling in a land overshadowed by death light has arisen.”

From that time on, Jesus began to preach, saying, “Repent, for the kingdom of heaven is at hand.”

One day, Jesus was walking by the Sea of Galilee. He saw two fishermen who were brothers, Andrew and Simon, who was called Peter. They were casting a net into the sea.

Peter and Andrew put down their net at once and followed Jesus.

As the three men walked along the sea, they came across another set of brothers.

James and John, the sons of Zebedee, were in a boat with their father. They were busy mending their fishing nets.

Jesus called to James and John, and the brothers immediately left their father and their boat to follow Jesus.

Jesus and his new friends traveled all around Galilee. Jesus taught in the synagogues, proclaiming the Gospel of the kingdom. He also cured people of sickness and disease.

His fame spread to all of Syria. People began to come to him with those who were sick, paralyzed, possessed, racked with pain and mentally ill. He cured everyone who came to him.

As a result, great crowds from Galilee, the Decapolis, Jerusalem, Judea and beyond the Jordan River began to follow Jesus.

1. Where did Jesus live after leaving the desert?

2. Who were the four men Jesus asked to follow him?

What was Matthew doing when Jesus asked Matthew to follow him? (Hint: Matthew 9:9)

What happened after Jesus had chosen all 12 of his apostles?

In Matthew 10:1, we read that Jesus called the men to him and gave them the power to drive out unclean spirits and to cure every disease and illness.

He then sent them on a mission and gave them some instructions before they left.

“Do not go into pagan territory or enter a Samaritan town. Go rather to the lost sheep of the house of Israel,” Jesus said. “As you go, make this proclamation: ‘The kingdom of heaven is at hand.’”

Jesus told his friends to cure the sick, raise the dead, cleanse lepers and drive out demons. But he told them not to take money for anything they did.

He also told them to stay with worthy people in the villages they were visiting and to wish the houses peace when they entered.

And if people or towns did not receive them or listen to their words, Jesus told the apostles to shake the dust off their feet outside the towns or houses to show that they would not associate with unbelievers.

“Amen, I say to you, it will be more tolerable for the land of Sodom and Gomorrah on the day of judgment than for that town,” Jesus said.

St. Francis-Regis Clet was born in Grenoble, France, in 1748. At age 21, he joined a religious congregation called the Lazarists, teaching theology and serving as master of novices.

In 1791, he traveled to central China, fulfilling his dream of becoming a missionary to the Far East. He served in China for 30 years despite language barriers, a harsh climate and local rivalries.

In 1818, all foreign missionaries in China became targets for persecution. He evaded arrest for a time, but in 1820, he was imprisoned, tortured and killed. We remember him on Feb. 17.

Answers: hand, kingdom, the, at, heaven, of, is

The kingdom of heaven is at hand.