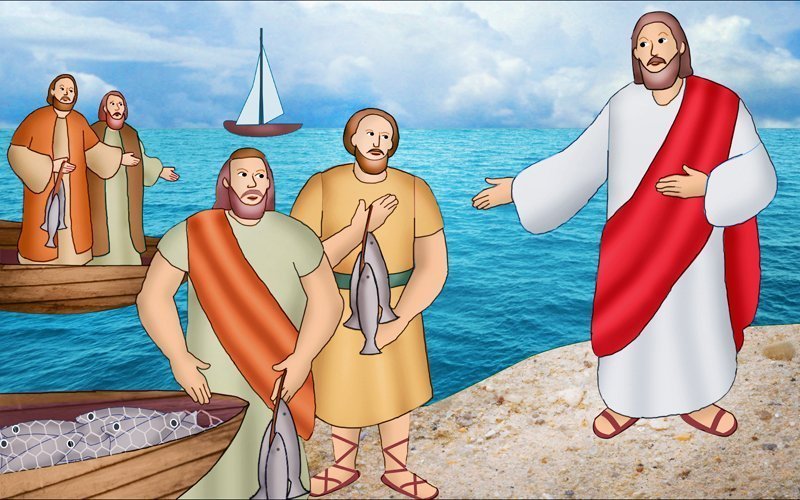 After Jesus was baptized, the Spirit led him into the desert.

Jesus fasted in the desert for 40 days and 40 nights. He was very hungry after going without food for so long.

That’s when the devil came to tempt him.

The devil tried to talk Jesus into turning some stones into bread. When Jesus refused, the devil made him stand on the top of the temple. The devil told Jesus to prove that he really was the Son of God by throwing himself from the building and having angels catch him before he reached the ground.

The devil tried one more time to tempt Jesus. He took Jesus to a high mountain and showed him all the kingdoms of the world. The devil said that he’d give Jesus all the kingdoms if only Jesus would bow down and worship him.

“Get away, Satan!” Jesus said firmly as he again told the devil no.

The devil gave up and left.

After this time of temptation, Jesus began his public ministry in Galilee. He went to live in Capernaum and began to preach.

“Repent, for the kingdom of heaven is at hand,” he told the people.

One day, Jesus was walking by the Sea of Galilee. He noticed some fishermen busy at work casting a net into the sea.

The two men were brothers — Simon, who was called Peter, and Andrew.

Jesus went to talk to them.

“Come after me, and I will make you fishers of men,” Jesus told them.

The men at once put down their fishing nets and followed Jesus.

As the new friends walked along, they saw another set of brothers, James and John, who were mending their fishing nets in a boat with their father.

Jesus called out to James and John and asked them to follow him. The brothers left their father in the boat and went with Jesus, Peter and Andrew.

Jesus and his new friends traveled all around Galilee. Jesus taught in synagogues, proclaimed the Gospel of the kingdom and cured all who were ill.

As Jesus’ fame spread, more and more people from near and far came to him to be cured. And great crowds began to follow Jesus wherever he went.

1. When did Jesus begin his public ministry?

2. Who were the first two apostles of Jesus?

Bible Accent: What is an apostle?

What is an apostle?

As a general term, apostle means “one sent on a mission.” In the Bible, the word has a very specific meaning — it is used to describe the 12 men whom Jesus specifically chose to be his followers.

These 12 men were very special to Jesus, and he gave them very important work to do. At the beginning of Matthew 10, Jesus sent the apostles to the “lost sheep of the house of Israel” to “cure the sick, raise the dead, cleanse lepers, drive out demons” and proclaim that “the kingdom of heaven is at hand.”

And in Matthew 28:19-20, Jesus gave the apostles a special mission to complete after he returned to heaven: to be the foundation of his church.

“Go, therefore, and make disciples of all nations, baptizing them in the name of the Father, and of the Son, and of the Holy Spirit, teaching them to observe all that I have commanded you,” Jesus told them.

On Dec. 9, 1531, he was walking on Tepayac Hill near Mexico City when Mary appeared to him. Mary asked Juan to speak to the bishop and ask that a shrine in her honor be built on the hill.

Juan did what Mary had asked, but the bishop wanted a sign from Mary.

Juan returned to Tepayac Hill on Dec. 12, 1531. Mary told him to pick some flowers that were blooming there and put them in his cloak to take to the bishop. When Juan opened his cloak in front of the bishop, the flowers fell out and the image of Our Lady of Guadalupe appeared on his cloak.

Juan lived the rest of his life as a hermit near the first chapel that was built on Tepayac Hill, and he died in 1548. He was canonized in 2002, and we remember him on Dec. 9.

Using Matthew 10:2-4 for hints, circle the names of the men who were among Jesus’ first 12 apostles.