Jesus calls himself a vine and his apostles branches - Catholic Courier 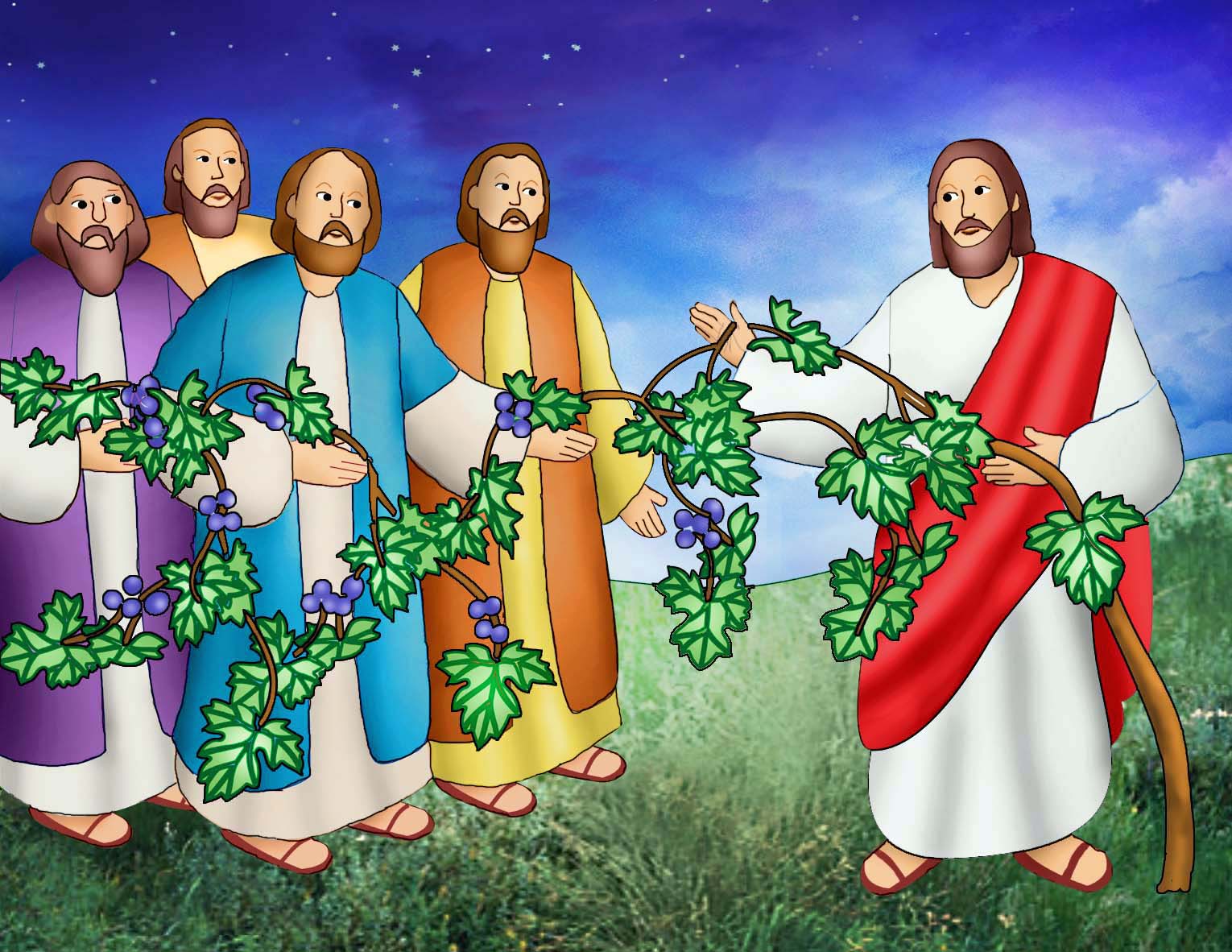 Jesus calls himself a vine and his Apostles branches

Jesus calls himself a vine and his Apostles branches

Before he died on the cross and was resurrected, Jesus had a long talk with his apostles over a Passover meal, which we call the Last Supper.

During this meal, Jesus told his friends many things. He wanted to prepare them for what was to come. To ensure they would believe in him as the Son of God, he told them what would happen to him, “so that when it happens you may believe.”

Even though Jesus was telling his friends many important and maybe some scary things, he did not want them to be afraid.

He reminded the apostles that there were many dwelling places in heaven and that he had prepared places for them there. He also told them that God would send them an advocate — the Holy Spirit — to help them after he returned to his Father in heaven.

Jesus wanted his friends to know that it was important to continue to believe in him and the things he had preached.

“I am the true vine, and my Father is the vine grower,” Jesus said. “He takes away every branch in me that does not bear fruit, and everyone that does he prunes so that it bears more fruit.”

Jesus said his friends were already like pruned branches because they had listened to his word. He told them to continue believing in him so they would have the strength and energy to carry on without him.

“Just as a branch cannot bear fruit on its own unless it remains on the vine, so neither can you unless you remain in me,” Jesus explained. “I am the vine, you are the branches. Whoever remains in me and I in him will bear much fruit, because without me you can do nothing.”

Jesus said that if they continued to follow him and his word, he would grant them whatever they asked for.

“By this is my Father glorified, that you bear much fruit and become my disciples. As the Father loves me, so I also love you. Remain in my love. If you keep my commandments, you will remain in my love,” Jesus said.

Jesus told them another thing about love.

“This is my commandment: Love one another as I love you,” he said.

1. What do we call Jesus’ last meal with his apostles?

2. What did Jesus compare himself and God to?

ESSAY: What is one of your favorite parables of Jesus and why?

St. Dunstan was born in England in the 10th century. He became a monk and was named abbot of Glastonbury in 940.

Dunstan became involved in politics, and in 960 he became archbishop of Canterbury. He advised the English rulers until he retired from politics.

In Jesus’ time, agriculture was very important. Many people did some type of farming to make a living or to provide food and clothing for their families. Even if people did not work as farmers themselves, they were very familiar with agriculture.

Because of this, Jesus would use agricultural examples to explain things to his followers.

For example, in Matthew 13, Jesus told the parable of the sower to explain how different people would react to hearing God’s word. Jesus compared the word of God to seeds that someone was planting.

As the sower planted, some seeds fell on a path and birds ate them. Jesus said this is like a person who hears God’s word and doesn’t understand it, so the person is influenced by evil and forgets about what he or she has heard.

Some of the seeds were planted in rich soil and the seeds grew and bore a lot of fruit. This, Jesus said, is like a person who hears God’s word and understands it, and the word helps him or her live life the way God wants.

Also in Matthew 13, Jesus compared the kingdom of God to a mustard seed that someone sowed in a field. He said that a mustard seed is the smallest of all of the seeds, but when it is done growing it turns into a very large bush that the birds of the sky can live in.

In the same way, Jesus began growing the kingdom of God. At first, he only had a few followers. But as he continued to spread God’s word, more and more people began to follow him and to believe.

Jesus told his followers many parables. Circle the names below that are the actual titles of some of Jesus’ parables. Hints have been provided.