Jesus calls us to be disciples, not hitmen, pope tells youth - Catholic Courier 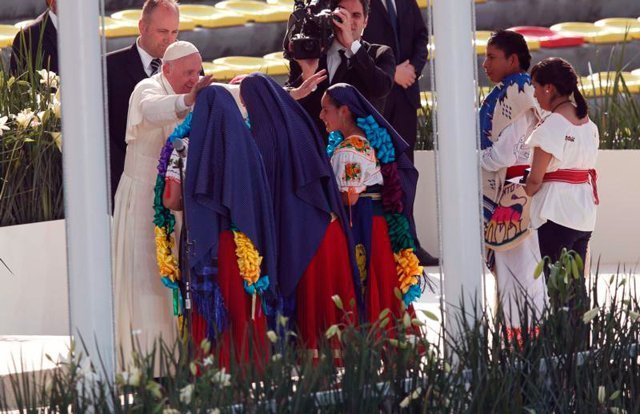 MORELIA, Mexico (CNS) –Jesus never sends anyone out as a hitman, dealing in death, but calls Christians to be his disciples and friends, Pope Francis told Mexico’s youth.

"Today the Lord continues to call you, he continues to draw you to him, just as he did with the Indian, Juan Diego," to whom Our Lady of Guadalupe appeared, he told tens of thousands of young people at Morelia’s Jose Maria Pavon Stadium Feb. 16.

Dozens of young people carried flags representing every diocese of Mexico present in the packed stadium or watching on big screens set up in a field outside. The pope not only greeted those present in Morelia but also thousands of Mexican youths following the event live from Guadalajara.

Echoing his words to government authorities earlier in the week, the pope reminded the youths that they are the wealth of Mexico and of the church.

"A mountain can have rich minerals that will serve humanity’s progress; that is its wealth. But it only turns into wealth when the miners who take out the minerals work on it. You are the wealth, and you must be transformed into hope," the pope said, in one of several departures from his prepared speech.

However, Pope Francis recognized the difficulties of recognizing one’s value when material wealth, fashion and prestige become symbols of one’s worth.

The pope said belief in Jesus is a sure source of hope and can help youths fight back against the influence of drug dealers "or others who do nothing but sow destruction and death."

"It is Jesus Christ who refutes all attempts to render you useless or to be mere mercenaries of other people’s ambitions," he said.

Jesus is the one word of hope that can help young people live fully and do their best for their friends, neighborhoods and communities, he said. While faith may not give them "the latest car model" or "pockets filled with money," it brings the experience of being loved, embraced and accompanied, which "no one can take away."

Departing yet again from his speech, the pope recalled a song often sung by mountain climbers.

"While they climb, they sing: ‘In the art of ascending, the victory isn’t in not falling, but in not remaining fallen,’" he said.

In turn, a young Christian must "stretch out your hand" to help others in Jesus’ name, particularly with "listening-therapy."

"Let them speak, let them talk. And little by little, they’ll start stretching out their hand and you will help them in Jesus’ name. But if you go in one shot and start preaching — and hitting them over and over — you leave the poor guy worse than he was before," he said.

Pope Francis urged young Mexicans to remember: "You are the wealth of this country, and when you doubt this, look to Jesus, who destroys all efforts to make you useless or mere instruments of other people’s ambitions."