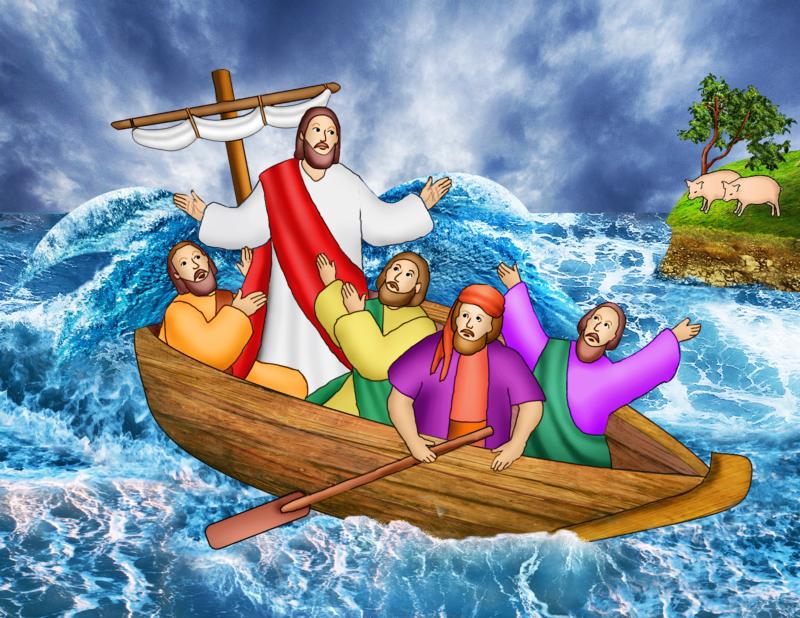 This is the artwork for Kids' Chronicle for June 30, 2020. (Illustration by Linda Rivers)

One day, Jesus went up the mountain to preach to the people.

When he came down, crowds of people followed him.

One man, a leper, approached Jesus.

Jesus stretched out his hand, touched him and said, “I will do it. Be made clean.” The leprosy was cleansed immediately.

Jesus continued to heal people. In Capernaum, he was approached by a centurion.

“Lord, my servant is lying at home paralyzed, suffering dreadfully,” the centurion said.

Jesus said that he would come to the man’s house and heal the servant.

“Lord, I am not worthy to have you enter under my roof; only say the word and my servant will be healed,” the centurion replied.

“You may go; as you have believed, let it be done for you,” said Jesus, and the servant was healed.

On another day, Jesus saw the crowd around him. He and the apostles got in a boat to cross the Sea of Galilee.

As they were crossing, a violent storm suddenly came upon the sea.

The boat was soon being tossed around and swamped by waves. But Jesus slept through the commotion.

The apostles, however, were wide awake with fear. They shook Jesus awake.

“Lord, save us! We are perishing!” they cried.

“Why are you terrified, O you of little faith?” Jesus said.

Then Jesus stood up. He rebuked the winds and the sea, and there was great calm.

The apostles were amazed.

“What sort of man is this, whom even the winds and the sea obey?” they asked one another.

When they reached the other side of the sea, in the territory of the Gadarenes, a herd of swine could be seen in the distance. Two demoniacs came from the nearby tombs and met Jesus on the shore.

“If you drive us out, send us into the herd of swine,” the demons begged Jesus.

The demons came out of the two people and entered the swine, and the whole herd rushed down the steep bank into the sea.

1. What sea did Jesus and the apostles cross?

2. What were the apostles in the boat afraid of?

TRIVIA: Whose prophesy about the Messiah was fulfilled by the healings of Jesus? (Hint: Matthew 8:16-17)

According to information in the New World Encyclopedia, the Sea of Galilee is Israel’s largest freshwater lake.

It is about 13 miles long, 8 miles wide and 209 meters below sea level, and the Jordan River is its main water source.

The lake is located in an area called the Jordan Great Rift Valley. The area is prone to earthquakes, and geological evidence suggests there was once volcanic activity in the area as well.

The hills and plateaus surrounding the sea protect it, resulting in mild winters and warm summers. However, since it lies so low in the rift valley, the sea is prone to sudden and violent storms. According to the encyclopedia, the main feature of the lake seems to be its ever-changing character.

The sea’s warm water supports many types of plant and animal life. Over the centuries, the fishing industry has thrived there.

The lake may be best known for its connection to Jesus, as much of his earthly ministry took place in or around it. For example, Jesus calmed a storm on the sea and walked on its waters, and his Sermon on the Mount was given overlooking the sea.

St. Clelia Barbieri was born near Bologna, Italy, in 1847. As a child, she spent her days weaving or sewing and praying in church.

She joined a catechetical group in her village, and she and several young women from the group later founded the Sisters Minims of Our Lady of Sorrows. The congregation was devoted to good works and contemplation.

Clelia died of tuberculosis in 1870, just two years after founding the order. She is considered the youngest founder of a religious community in church history, and we remember her July 13.

Answers: are, Lord, us, we, save, perishing

Lord, save us! We are perishing!