Jesus chooses 12 men to be his apostles - Catholic Courier 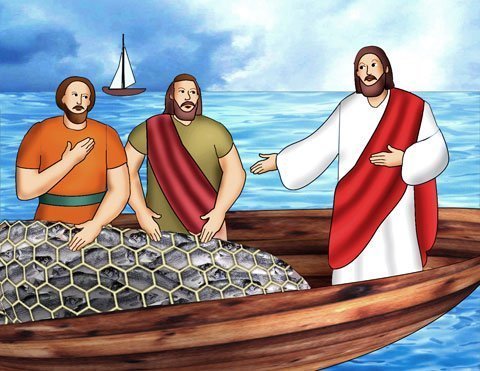 Jesus chooses 12 men to be his apostles

Jesus chooses 12 men to be his apostles

A very large crowd had gathered to hear Jesus teach about the word of God. Since Jesus was by the Lake of Gennesaret, he had an idea how it might be easier for the people to see and hear him.

Some fishermen were at the shore of the lake washing their nets, so Jesus went over to them and stepped into one of the boats, which belonged to a man named Simon. He asked Simon to bring the boat out a short distance into the water. Simon did as Jesus asked and Jesus finished teaching from inside the boat.

Before asking Simon to bring the boat back to shore Jesus said to him, “Put out into deep water and lower your nets for a catch.”

Simon said to Jesus, “Master, we have worked hard all night and have caught nothing, but at your command I will lower the nets.” So Simon sailed out into the deeper water and, with the help of the other fishermen who were in the boat with him, lowered the nets into the water.

Simon fell on his knees and said, “Depart from me, Lord, for I am a sinful man.” All the men in the boat were as amazed as Simon, including his partners, James and John, who were brothers.

Jesus said to Simon, “Do not be afraid; from now on you will be catching men.” Then the fishermen brought their boats back to the shore and from that time on they became followers of Jesus.

Not long after that, Jesus called many of his disciples together and from them he chose 12 to be his first apostles. They were Simon (whose name Jesus changed to Peter) Andrew, James, John, Philip, Bartholomew, Matthew, Thomas, James, Simon, Judas and Judas Iscariot who later betrayed Jesus.

Q&A
1. Why did Jesus get into Simon’s boat?
2. What happened when Simon put his net into the water?

During Bible times most work involved either the land or the sea. Farming, fishing, and raising sheep and cattle were important occupations. There were no factories, but workers had some tools, such as plows, axes and sickles. The work that is performed today by tractors and other heavy equipment was powered by animals or even teams of men pulling heavy loads. Using the knowledge and technology of the day, some skilled workers were able to build everything from simple homes to elaborate temples and palaces. Women worked very hard as well. In addition to raising and caring for their children, they would have to grind grain into flour and carry heavy jugs full of water.

Benedict of Aniane (747-821) was in his early 20s when he decided to live a religious life. He joined a monastery and spent nearly three years learning the ways of the monks. After the death of the abbot, Benedict was offered the chance to be his successor, but he said no because he believed the other monks would not be open to the reforms he wanted to put into practice. Instead Benedict built a hermitage on his own property where he could lead a solitary religious life. Eventually he attracted willing followers, so he built a monastery of his own. This led to Benedict being in charge of many of the monasteries in the region, and he was very influential in their reform and improvement. He wrote many papers that help to establish codes for monastic living. We honor him on Feb. 11.