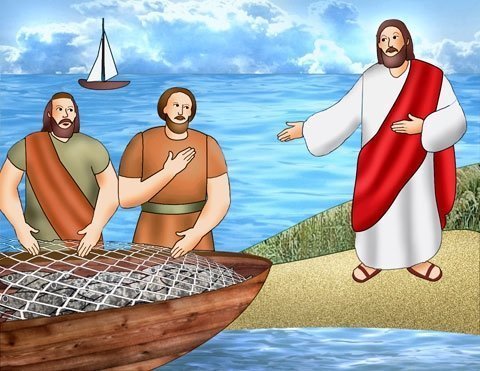 John had baptized Jesus, after which Jesus went into the desert where he spent 40 days. While he was there he was tempted by Satan, but he also was cared for by angels. After this time, Jesus returned home and learned that John had been arrested. Jesus them went to Galilee where he declared, “This is the time of fulfillment. The kingdom of God is at hand. Repent, and believe in the gospel.”

As Jesus was passing by the Sea of Galilee, he saw two brothers named Simon and Andrew who were casting their fishing nets into the water. He said to them, “Come after me, and I will make you fishers of men.” Without hesitation, both men stopped what they were doing and went with Jesus. Jesus continued along his same path and found two more fishermen who were repairing their nets. They were also brothers, named James and John. Jesus called them as well, and they left the work that they were doing in the hands of their father and some of his hired men.

When Jesus and his new apostles reached Capernaum, it was on the Sabbath day, so Jesus entered the synagogue and began to teach. The people who heard him were amazed by his words, because he taught as if he had true authority and did not teach as the scribes did.

While Jesus still was there, a man possessed by an unclean spirit approached him. “What have you to do with us, Jesus of Nazareth?” the man cried out. “Have you come to destroy us? I know who you are — the Holy One of God!”

Jesus immediately spoke to the spirit. “Quiet! Come out of him!” The spirit drove the man into convulsions and came out of him with a shout. This, too, amazed the people, as they asked themselves, “What is this? A new teaching with authority. He commands even the unclean spirits and they obey him.” From that moment word of Jesus, his teachings and his actions began to spread everywhere across Galilee.

Later that same day, even into the early evening, Jesus healed the sick people who were brought to him, and he cast out many unclean spirits.

READ MORE ABOUT IT:
Mark 1

Q&A
1. What was the occupation of the four men Jesus called?
2. What did the people say about the way Jesus taught?

Jesus chose 12 men to become his first apostles. Scholars have given symbolic meaning to certain numbers in the Bible. Seven is seen as representing perfection or completeness, such as the creation taking seven days. Three can mean unity, such as the Trinity of the Father, Son and Holy Spirit, and 40 can mean a very long time, such as the 40 years Israel wandered in the desert. Twelve seems to represent government or order. Jacob had 12 sons, whose names later became the names of the 12 tribes of Israel. In the Book of Revelation (chapter 21) John saw the city of Jerusalem encircled by a wall that had 12 gates protected by 12 angels. To maintain the completeness of the 12 apostles, in Acts 1, Matthias was named to take the place of Judas, who had betrayed Jesus.

Mucian Mary Wiaux (1841-1917) was referred to by Pope John Paul II as “the light of Belgium and the glory of his congregation.” This statement was the opposite of some of the things the bishops of Mucian’s home country were saying. They believed his life had been plain and unremarkable. He was raised by very religious parents, whose example led him to enter the Brothers of the Christian Schools. He continued the rest of his education at the college at Malonne. Although his birth name was Louis Joseph, he took on the name of the fellow martyr and missionary companion of St. Mark. Mucian became a teacher at the college and was admired for being able to encourage even the poor students to make their best efforts. He also earned a reputation for being a man of prayer and holiness. We honor him on Jan. 30.