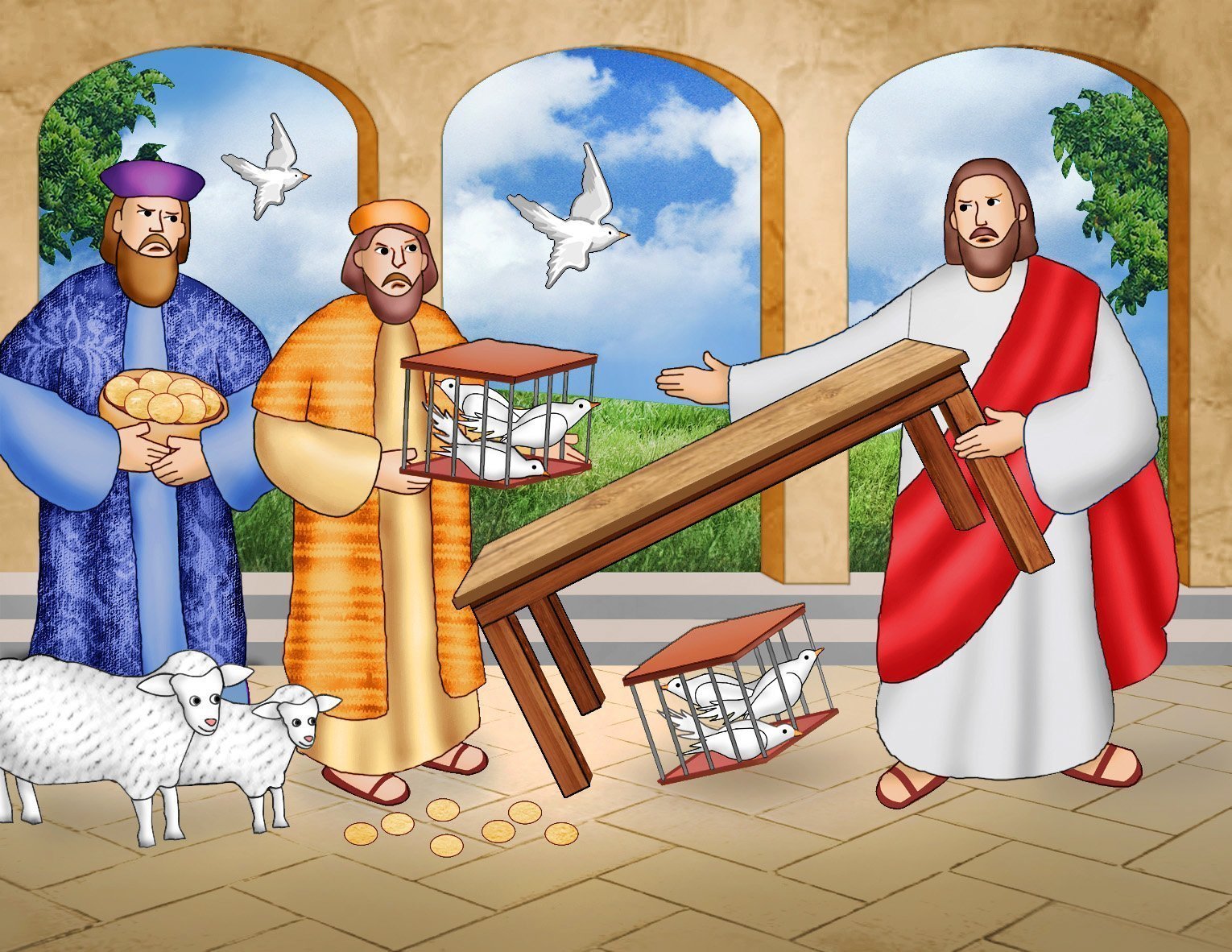 Jesus went to the Temple in Jerusalem during the Passover and drove out the money-changers and others who were using his Father’s house as a marketplace. (Illustration by Linda Rivers)

Jesus cleanses the Temple in Jerusalem

Jesus cleanses the Temple in Jerusalem

At the beginning of his earthly ministry, Jesus revealed his glory through signs in Cana, and his apostles began to believe in him.

Soon after, Jesus traveled to Jerusalem to celebrate the Passover.

He visited the Temple, which was very busy and crowded, because Jews from many different nations had come to Jerusalem for the Passover.

When he entered the Temple area, he saw a surprising and disturbing sight.

There were businesspeople all over the Temple area who were selling high-priced oxen, sheep and doves for worshippers to purchase if they did not bring their own animals to sacrifice to God. Money-changers also were seated at nearby tables, waiting to charge people high prices to exchange their foreign currency for local money.

Jesus was very upset that such business transactions were taking place in his Father’s house.

He made a whip out of cords and approached the businesspeople and money-changers.

Jesus used the whip to drive those selling sheep and oxen out of the Temple area. He also spilled the coins of the money-changers and overturned their tables.

“Take these out of here, and stop making my Father’s house a marketplace,” he demanded.

As Jesus was doing this, his apostles recalled words from Psalm 69:10: “Zeal for your house has consumed me.”

The Jews looked at what Jesus had done.

“What sign can you show us for doing this?” they wanted to know.

“Destroy this temple, and in three days I will raise it up,” he said.

“This Temple has been under construction for 46 years,” the Jews replied, “and you will raise it up in three days?”

But Jesus was not talking about the Temple building, but rather the temple of his body.

So, when Jesus was raised from the dead on the third day after his crucifixion, his apostles remembered what Jesus had said when he cleansed the Temple. They believed the Scriptures and the words Jesus had spoken.

1. Where did Jesus go to celebrate the Passover?

2. What activities did Jesus see taking place in the Temple?

ESSAY: What would you have done if you had seen the house of God turned into a marketplace?

What was one of the signs in Cana that revealed Jesus’ glory?

In John 2:1-12, we read that Jesus, his apostles and his mother, Mary, were invited to a wedding feast in Cana.

During the feast, Mary noticed that the wine had run out. She decided to let her son know about it.

“They have no wine,” she told Jesus.

Jesus looked at his mother.

“Woman, how does your concern affect me? My hour has not yet come,” he replied.

“Do whatever he tells you,” she said.

Jesus walked up to six stone jars that were capable of holding 20 to 30 gallons of water.

“Fill the jars with water,” Jesus told the servers.

When the servers had filled the jars, Jesus told them to draw out some of the liquid and take it to the headwaiter.

The servers offered the headwaiter the liquid they had removed from one of the stone jars.

Jesus had turned the water into wine.

When the headwaiter tasted the water that had turned into wine, he was very pleased.

The headwaiter called the bridegroom.

“Everyone serves good wine first, and then when people have drunk freely, an inferior one; but you have kept the good wine until now,” the impressed headwaiter said.

Turning water into wine marked the beginning of Jesus’ signs in Cana in Galilee, and his apostles began to believe in him.

According to legend, St. Cecilia was a Roman Christian who lived in the third century.

She was betrothed to a man named Valerian, whom she persuaded to convert to Christianity. His brother, Tiburtius, also converted.

Valerian and Tiburtius were martyred for their faith. Cecilia was as well after refusing to take part in an idolatrous act.

Unscramble the words and arrange them to form a quotation from the Bible Accent.

Answers: tells, do, you, whatever, he

Do whatever he tells you.