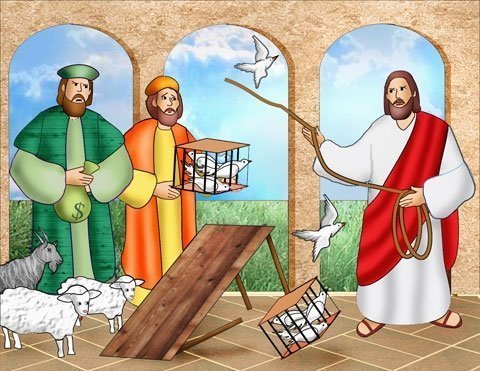 Jesus cleanses the temple in Jerusalem

Jesus cleanses the temple in Jerusalem

The people of Jerusalem were prepar¬¨ing for the celebration of the Passover feast, which was not very far off. Jesus thought this would be a good time to vis¬¨it Jerusalem, so he went there with his apostles. But Jesus was not very happy about what he found when he arrived.

When he reached the temple, what he found was more like a shopping area than a place of worship. Tables had been set up and merchants were selling oxen, sheep and doves. Money changers, men who exchanged currency of different re¬¨gions or countries for a profit, also were busy making money off of their cus¬¨tomers.

Jesus was furious. He found some cords and made a whip out of them. Then he used it to drive the merchants and the money changers away. He threw the coins of the money changers onto the ground and he overturned all of the ta¬¨bles. To the men who were selling doves he said, “Take these out of here, and stop making my Father’s house a market¬¨place.”

When the apostles saw what Jesus had done they remembered the words writ¬¨ten in the Psalms, “Zeal for your house will consume me.”

The Jews were angry with Jesus, so they said to him, “What sign can you show us for doing this?” Jesus replied, “Destroy this temple and in three days I will raise it up.”

The Jews could not believe what Jesus had said to them, so they asked, “This temple has been under construction for forty¬¨six years, and you will raise it up in three days?”

But Jesus was not referring to the physical building of the temple. He was talking about the temple that was his body. The apostles remembered these words of Jesus after he had been raised from the dead on the third day.

Jesus stayed in Jerusalem for the Passover and he continued to perform signs and wonders that caused many people to come to believe that he was the Son of God.

Q&A
1. What did Jesus find that made him so angry?
2. What sign did Jesus offer to the Jews?

Passover was the religious feast where the Jews celebrated the deliverance of their ancestors from being slaves in Egypt. The passing over refers to the angel who was delivering God’s wrath on the households of Egypt. If the angel saw the blood of a lamb on the door of any house, he would “pass over” it and would not deliver God’s wrath on that house. Exodus 12 describes this event in more detail. After the Israelites escaped from Egypt they wandered in the desert for 40 years before God brought them to the promised land, Canaan. Joshua 5 tells us that the Israelites celebrated Passover when they were near the city of Jericho. In the New Testament, Jesus celebrated the Passover feast with his apostles with a meal we know as the Last Supper.

Euphrasia (382¬¨420) was raised by her uncle, Emperor Theodosius I, be¬¨cause her father had died when she was only 1 year old. The Emperor al¬¨so cared for Euphrasia’s mother. Following the custom of the time, when Euphrasia was 5 years old, the emperor arranged a marriage for her to the son of a wealthy senator. The wedding would take place when she was old enough to marry. Several years later, Euphrasia moved with her mother to Egypt, where they lived near a convent. Euphrasia loved the nuns and eventually joined the con¬¨vent. When the time came for her to be married, Euphrasia begged her un¬¨cle to release her from the contract so she could remain a nun, and instead give her inheritance to the poor. The emperor agreed. She lived a life of hu¬¨mility and grace at the convent. We honor her on March 13. 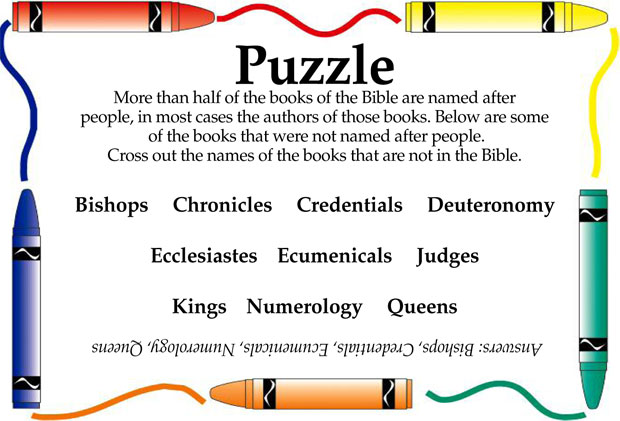