Jesus cures a crippled woman on the Sabbath - Catholic Courier 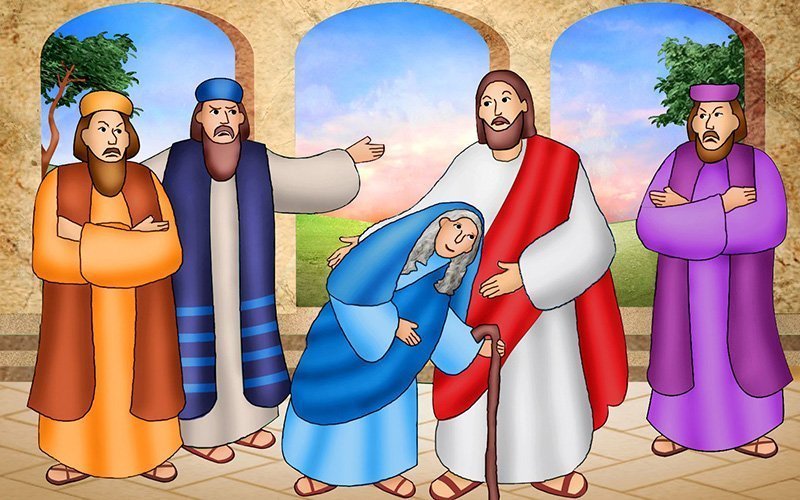 This is the artwork for Kids' Chronicle for Oct. 26, 2020. (Illustration by Linda Rivers)

Jesus cures a crippled woman on the Sabbath

Jesus cures a crippled woman on the Sabbath

Once, when eating at the home of a Pharisee, Jesus did not observe the prescribed washing before the meal.

When the Pharisee expressed his amazement, Jesus admonished all Pharisees for their hypocrisy, because they always told the people how to follow the laws of God but did not do so themselves.

Jesus even warned his followers: “Beware of the leaven — that is, the hypocrisy — of the Pharisees.”

One day, Jesus was teaching in the synagogue. It was the Sabbath, which the Jewish people observed as a day of rest and a day to worship God.

There was a woman in the synagogue who had been crippled by an evil spirit, and for the past 18 years, she had not been able to stand up straight.

As Jesus was teaching, he looked up and noticed the woman.

“Woman,” Jesus called out to her, “you are set free of your infirmity.”

Jesus walked over to her and laid his hands on her. She immediately stood up straight and began to glorify God.

Just then, the leader of the synagogue came over to Jesus. He was not happy about what Jesus had done. He thought it was a terrible thing for Jesus to heal the crippled woman, because, after all, it was the Sabbath. No work was to be done that day, not even by a person’s animals.

The leader of the synagogue looked at the crowd.

“There are six days when work should be done. Come on those days to be cured, not on the Sabbath day,” he announced.

Some people in the crowd agreed.

Jesus looked at the people who were angry at what he had done.

“Hypocrites!” Jesus said to them. “Does not each one of you on the Sabbath untie his ox or his ass from the manger and lead it out for watering? This daughter of Abraham, whom Satan has bound for 18 years now, ought she not to have been set free on the Sabbath day from this bondage?”

The angry people hung their heads and were embarrassed by their actions. The rest of the people who witnessed the miracle Jesus performed rejoiced in what the Lord had done.

1. How was the woman crippled?

2. Why was the synagogue leader angry with Jesus?

Answer: When he chased out the money-changers.

In Luke 6, we read about another time that Jesus cured a person on the Sabbath.

At the beginning of the chapter, Jesus’ apostles had picked and eaten heads of grain on the Sabbath while walking through a field. Some Pharisees noticed and wanted to know why Jesus’ friends were doing something unlawful on the Sabbath.

Jesus reminded the Pharisees of what David had done in 1 Samuel 21:1-6.

David was fleeing from King Saul. David and his companions were hungry, so they went to the house of God and ate the bread offering that only the priest could lawfully eat.

“The Son of Man is lord of the Sabbath,” Jesus added.

Soon after, Jesus was teaching in the synagogue on a day when a man with a withered right hand was there.

The Pharisees and scribes were watching Jesus closely to see if he would cure the man so they could accuse Jesus of wrongdoing.

Jesus was well aware of what was going on.

“Come up and stand before us,” he said to the man with the withered hand.

Jesus addressed the people he had been teaching.

Jesus turned back to the man.

“Stretch out your hand,” Jesus told him.

The man stretched out his hand, and the withered hand was restored.

Engelbert was known for being generous to the poor and being fair when settling disputes.

He was martyred in 1225 by his own cousin and other nobles after demanding that his cousin make restitution to nuns in Essen for stealing their property.

Using the hints provided, put a T next to the sentences that are true and an F next to the ones that are false. If a sentence is false, use the line at the end to write down the correct answer.