Jesus cures a man on the Sabbath - Catholic Courier 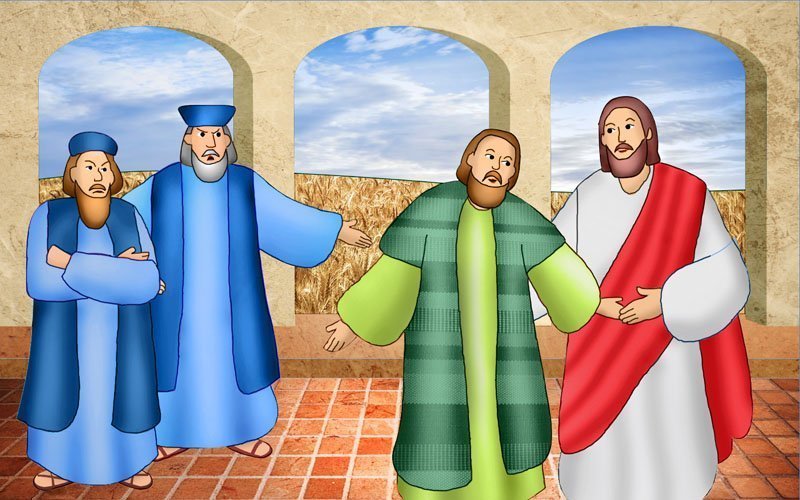 Jesus cures a man on the Sabbath

Jesus cures a man on the Sabbath

Jesus returned to Galilee after spending 40 days in the desert. He traveled all around the area, healing those who were sick and calling people to follow him.

One day Jesus and his friends were walking through a field of grain. It was the Sabbath, a day of rest on which no work was to be done.

As they walked through the field, Jesus’ followers picked the heads of grain, rolled them between their hands and ate them.

The Pharisees noticed and questioned Jesus.

“Why are you doing what is unlawful on the Sabbath?” they asked.

Jesus reminded the Pharisees what David had done in 1 Samuel 21:1-6.

David was fleeing King Saul, who wanted to harm him. During his flight, David stopped and asked the priest of Nob for five loaves of bread, but the priest only had holy bread to give him.

“Have you not read what David did when he and those (who were) with him were hungry? He went into the house of God, took the bread of offering, which only the priests could lawfully eat, ate of it and shared it with his companions,” Jesus said.

“The Son of Man is lord of the Sabbath,” he added.

On another Sabbath, Jesus was teaching in the synagogue. One of the men who was there had a withered right hand.

After the incident with the grain, the Pharisees and scribes were watching Jesus closely to see if he would cure on the Sabbath so they could accuse him of wrongdoing.

Jesus knew what the Pharisees and scribes were up to.

“Come up and stand before us,” he said to the man with the withered hand.

Jesus addressed the people he had been teaching.

Jesus turned back to the man.

“Stretch out your hand,” he told the man.

The man stretched out his hand, and the withered hand was restored.

The Pharisees and scribes became enraged and began to talk about what they could do to Jesus.

1. Who accused Jesus and his friends of doing something unlawful?

2. Who did Jesus cure on the Sabbath?

ESSAY: Describe what you do to remember the Sabbath and keep it holy.

What does this mean?

In Exodus 20:8-11, we read that the Third Commandment says to “remember the Sabbath day — keep it holy.” God had created the world in six days and rested on the seventh, and he wanted his people to have a day of rest as well.

“You shall not do any work, either you, your son or your daughter, your male or female slave, your work animal, or the resident alien within your gates,” God said.

Over time, the Jewish leaders created stricter and stricter rules regarding what activities were prohibited on the Sabbath. Curing on the Sabbath broke those strict rules.

Jesus had a different view — the Sabbath was meant to be a blessing from God to his people instead of a day for following burdensome man-made rules.

In Matthew 12:11-12, Jesus also told the Pharisees why he cured on the Sabbath.

“Which one of you who has a sheep that falls into a pit on the Sabbath will not take hold of it and lift it out?” he asked the Pharisees. “How much more valuable a person is than a sheep. So it is lawful to do good on the Sabbath.”

Giovanni Croese was born to an Italian farm family in 1804. He became a Conventual Franciscan, but in 1825 he switched to the Capuchin order in Genoa, Italy, and took the name Francis Mary.

St. Francis Mary went door to door in Genoa to beg for food for the community. He became known as a seer and a miracle worker.

During a cholera epidemic in Genoa, he offered himself to God so the crisis would end. He died in 1866 while ministering to people with the disease, and the epidemic slowed down significantly after his death. We remember him on Sept. 17.

Put a T next to the sentences about Jesus healing people that are true and an F next to the ones that are false. Hints have been provided.