Jesus cures a woman on the Sabbath - Catholic Courier 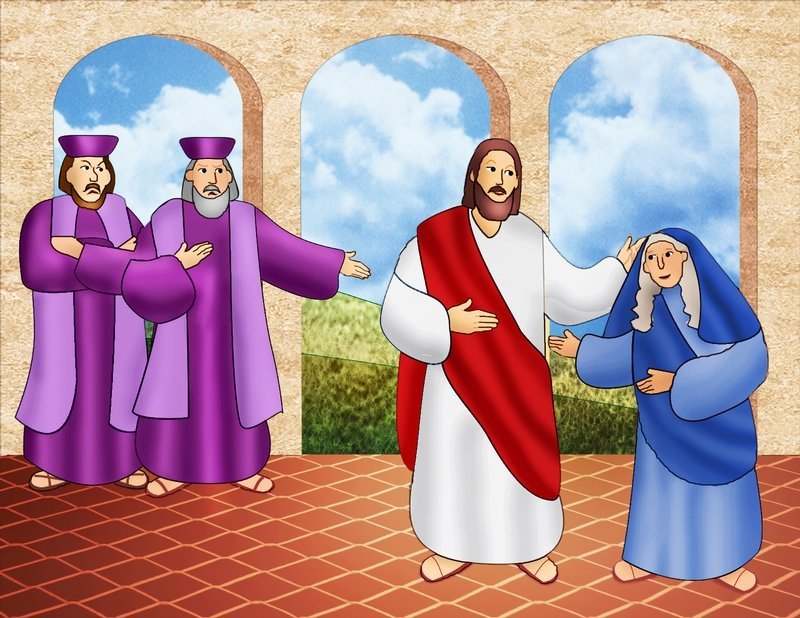 One day, Jesus was teaching in the synagogue. It was the Sabbath, the day that the Jewish people kept as a day of rest and a day to worship God.

There was a woman in the temple that day who was doing a strange thing. She was bent over as if she were about to pick something up off of the floor, and she walked around the temple in this position. It became clear to anyone watching her that she was not doing this on purpose. Come to find out, the woman had been crippled by an evil spirit, and for the past 18 years she had not been able to stand up straight.

As Jesus was teaching, he looked up and noticed the woman.

“Woman,” Jesus called out to her, “you are set free of your infirmity.”

Jesus walked over to her and laid his hands on her. She immediately stood up straight and began to glorify God.

Just then, the leader of the synagogue came over to Jesus. He was not happy about what Jesus had done. He thought it was a terrible thing for Jesus to heal the crippled woman, because, after all, it was the Sabbath. No work was to be done that day, not even by a person’s animals.

The leader of the synagogue looked at the crowd.

“There are six days when work should be done. Come on those days to be cured, not on the Sabbath day,” he announced.

Some people in the crowd agreed.

Jesus looked at the people who were angry at what he had done.

“Hypocrites!” Jesus said to them. “Does not each one of you on the Sabbath untie his ox or his ass from the manger and lead it out for watering? This daughter of Abraham, whom Satan has bound for eighteen years now, ought she not to have been set free on the Sabbath day from this bondage?”

The angry people hung their heads and were embarrassed by their actions. The rest of the people who witnessed the miracle Jesus performed rejoiced in what the Lord had done.

Jesus then went back to teaching them about the kingdom of heaven, comparing it to a mustard seed that grew into a large bush with plenty of branches in which the birds could find shelter.

1. Why was the woman crippled?

2. Why was the synagogue leader angry with Jesus?